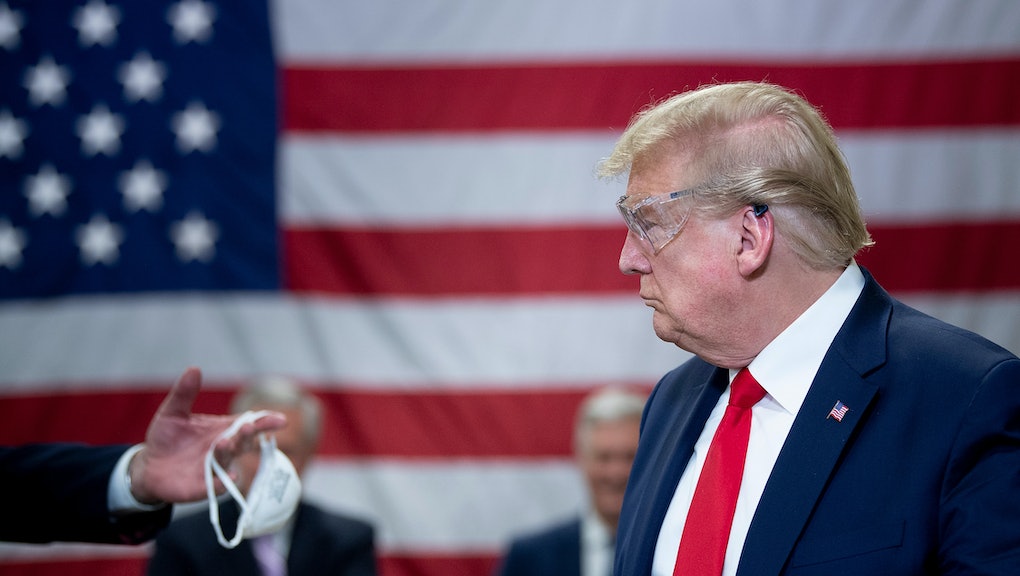 Trump's anti-mask agenda is such an unnecessary escalation of risk

President Trump likes to think of himself as a big tough guy who does big tough things like honk horns and hug flags and stare directly into the sun. It's in this spirit of bigness and also toughness that I assume the president continues to defy the overwhelming bulk of available medical advice by absolutely refusing to wear a face mask in the midst of an extremely infectious viral pandemic. In fact, according to allies and aides who spoke with NBC News this week, the president is so deeply committed to his mask-less existence, that he's privately begun describing wearing one as "send[ing] the wrong message."

It seems as if Trump worries that wearing a mask might somehow remind remind people that a plague is out there, when what he'd really rather everyone focus on is how great it is that some states will let you get your hair cut or drunkenly throw an axe while coronavirus continues to ravage the U.S.

The president "has also told confidants that he fears he would look ridiculous in a mask and the image would appear in negative ads," according to one official who discussed the political significance Trump's uncovered punim with NBC News.

To be clear, the president isn't hiding his aversion to medically advisable protective measures. In fact, he straight-up declared "I won't be doing it personally" during the very same press conference at which he announced the CDC's revised guidelines for wearing a mask.

It's one of the few times the president has actually stuck to his messaging, too. He left his mouth and nose uncovered during his trip this week to Phoenix, Arizona, where he visited Honeywell's N95 respirator mask factory. Despite the purpose of the visit being to highlight workers toiling to make essential protective equipment, Trump still refused to wear one in public. He later insisted that he'd masked up while "backstage," but was told he "didn't need" one during his tour, so opted not to wear one.

Trump's anti-mask agenda has trickled down, at least one step below him, to Vice President Mike Pence, who also was caught full-faced while interacting with hospital staff and patients during a recent visit to Minnesota's Mayo Clinic. After Pence's visit, the hospital tweeted, and then deleted, a statement claiming Pence had in fact been notified beforehand of the facility's mandatory mask policy.

Pence later apologized (sort of) for his masklessness, saying during a Fox News town hall that "I didn't think it was necessary, but I should have worn the mask at the Mayo Clinic."

The incredible thing here is that Trump is, by all indications, exactly the sort of person who should be doing everything he possibly can to mitigate his own exposure to coronavirus: He's an elderly man with underlying medical conditions, obesity being one of the known risk factors for COVID-19. He also, it turns out, was very recently in close proximity with someone who has tested positive for the virus.

Yes, on Thursday CNN reported that one of the president's personal valets had a confirmed case of coronavirus, and that "Trump was upset when he was informed Wednesday that the valet had tested positive."

And what does a presidential valet do, you ask? They serve his food and drinks, travel with Trump on trips, and generally act as the president's extremely helpful shadows. In other words, they're in close proximity to Trump and his family all the time.

According to White House Deputy Press Secretary Hogan Gidley: "The president and the vice president have since tested negative for the virus and they remain in great health." Which is fine, but as CNN notes, the White House still doesn't actually have a policy in place mandating staff — including valets — wear masks.

Will this extremely close brush with a virus that has already killed nearly 75,000 people in the United States help the president make the extremely easy decision to just put a mask on his face already? Probably not. Because he's a very big and tough guy, and big tough guys don't cower behind personal protective equipment just because of some teeny tiny viruses. His arbitrary refusal may result in a needless increase in risk to our commander in chief, but it also likely conveys a dangerous broader message to other Americans about coronavirus precautions. After all, if the guy who is in charge of the country and has the most up-to-date information about this virus isn't strapping one on, why should they?

More like this
Marjorie Taylor Greene rejects the "so-called science" of evolution
By Rafi Schwartz
West Virginia is offering guns to incentivize people to get vaccinated
By Rafi Schwartz
"Our society is really totally nuts": Newly revealed emails show how Fauci really felt during the pandemic
By Rafi Schwartz
Stay up to date