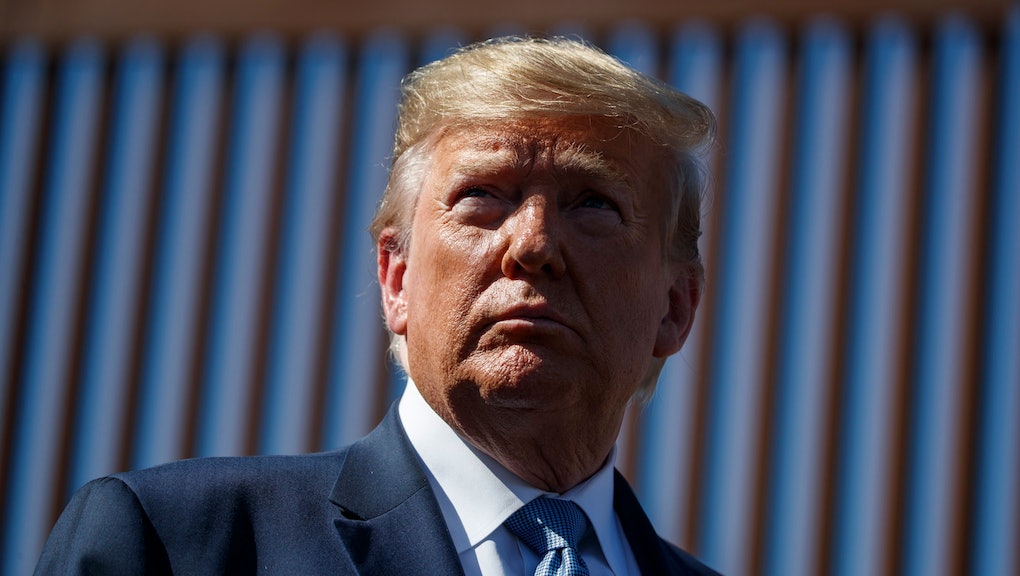 While campaigning in 2016, President Trump made continued promises that Mexico would pay for a wall along the southern border. That never happened. Instead, Trump struggled to find a way to pay for the project. In the latest blow, it now seems that Trump's border wall is being crowdfunded as the president scrambles to gain funding.

Despite all of Trump's talk about building a 2,000-mile wall, the administration only received funding to build about 200 miles of the border wall. Of those miles, The Washington Post reported that the administration has only built about 110 so far, and much of that is in areas where the construction is replacing "dilapidated designs" rather than erecting a brand new barrier.

A private group stepped in with intentions of building a portion of the wall for Trump. Known as We Build the Wall Inc., CNN reported that the group has been communicating with the Department of Homeland Security and U.S. Customs and Border Protection since at least October.

Last summer, the group gained a lot of publicity after it raised millions in a GoFundMe campaign for wall construction. According to the group's fundraiser description, it completed its "first major wall section" in New Mexico in June, along with construction in the El Paso sector.

What's different now is that while those sections were completed on private land, this time around, Brian Kolfage, the group's founder, says that the wall project will be completed on federal land and then given to the government. Although the group seems confident in the move, their latest endeavor opens up a lot of questions — namely, whether it's legal.

"[DHS] told us it was going to take a while because the government moves slow. Right off the bat they gave us a checklist," Kolfage told CNN. "They said they were going to help us get it done because there was a need to get it done."

As Kolfage's group tries to get its newest project off the ground, Trump is once again seeking money from Congress. This year, Trump plans to ask for $2 billion in funding for the border wall, which is way less than what was requested last year. And while it's unlikely that Trump will get all of the money he asks for, the president is more than willing to take funding from other areas.

After Trump's refusal to sign a spending bill resulted in the country's longest government shutdown early last year, he declared a state of emergency at the southern border, which freed him to move around government money in order to fund the wall. Then, in September 2019, the Pentagon diverted billions from military funding to be used to build the wall instead.

When you think of "military funding," you might think of money that was going towards weapons or other combat-specific resources. But you'd be wrong. Vice reported that about $400 million of that money was intended for projects in Puerto Rico — the majority of which were related to Hurricane Maria recovery.

If Kolfage's group continues to move forward with its plans, DHS and CBP probably won't push back too much. When CNN asked CBP whether it was explicitly assisting with the project, the agency merely said, "In the event that [We Build the Wall] seeks to build private barrier on federal lands, the government would have to provide access to the property for construction."