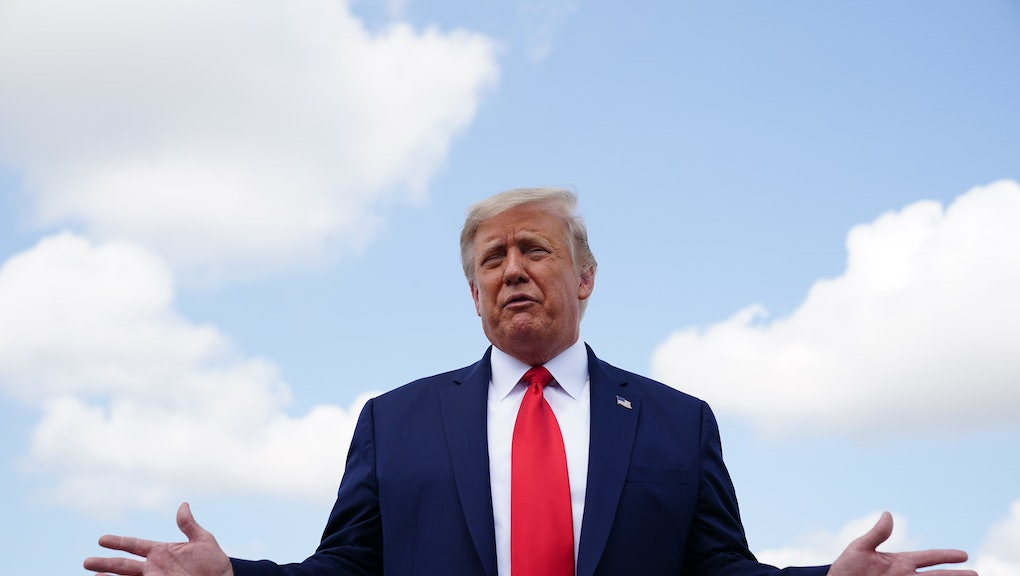 Trump's brilliant debate plan is to just wing it

Now that both the Democratic and Republican National Conventions are (mercifully) in our rearview mirrors, the next stop on our deeply cursed slog toward Nov. 3 is the much-anticipated triad of upcoming presidential debates between Donald Trump and Joe Biden.

The first debate, scheduled for Sept. 29, marks the beginning of the end of the 2020 election. Accordingly, expectations are high for what will be Trump and Biden's premier opportunity to say mean things about one another, to one another, rather than on Twitter or Zoom.

For Biden, the one-on-one with Trump marks the most significant, highest-profile debate of his long career in politics. For Trump, however, his first chance to call Joe "sleepy" in person is less a platform for meticulous political messaging so much as it's yet another opportunity to just let it rip and hope for the best.

According to a new report from NBC News on Wednesday, Trump is eschewing normal debate prep in favor of ... shall we say ... more "informal" practices. No practice rounds, or dedicated study sessions, or, in some cases, even prepared answers at all. Instead, Trump is relying on what NBC News deemed "informal discussions," plus his presidential briefings, to get him up to speed.

"It’s not the traditional, ‘We need Chris Christie to fill in and play Hillary Clinton,’ like we did four years ago," one Trump ally told NBC News, while the Trump campaign's communications director posited that "if you ask the president, he would say that he is preparing for debates by running the country, as president."

Biden, meanwhile, has suggested that the president's habitual falsehoods — a proclivity that seems to be particularly relevant given Trump's plan to just wing it on the debate stage — could potentially be "instantly fact-checked by an agreed-to group of people" using a "crawler" across viewers' screens.

Biden also seemed aware — even before NBC News's report of the president's non-plan plan — that any of Trump's expected onstage obfuscations would need to be countered first and foremost by him, in realtime. "As long as the commission continues down the straight and narrow, as they have, I’m gonna debate him," Biden told MSNBC in August. "I’m gonna be a fact-checker on the floor while I’m debating him."

Indeed, while Trump certainly is more comfortable rambling on without any sort of plan or purpose, the free-wheeling "leave it all on the table" approach that thrills supporters at rallies might not translate well when he's pressed in person by Biden — who, it should be noted, has spent the past year re-sharpening his rhetorical skills over nearly a dozen Democratic primary debates.

According to sources within the president's camp who spoke with NBC News, Trump is allegedly counting on Biden to flub a line or make some sort of notable gaff during their first debate. That is to say: Rather than prepare for his own success, he's expecting someone else to do all the work for him.

If nothing else, that seems pretty solidly in line with Trump's overall political philosophy in a nutshell.

More like this
Nancy Pelosi took a stand on the Jan. 6 committee, and it left Republicans whiny as hell
By Rafi Schwartz
As Biden nears an elusive infrastructure deal, Trump is saltier than ever
By Rafi Schwartz
Biden's idea of filibuster reform is to bring back painfully long and boring floor speeches
By Vanessa Taylor
Stay up to date