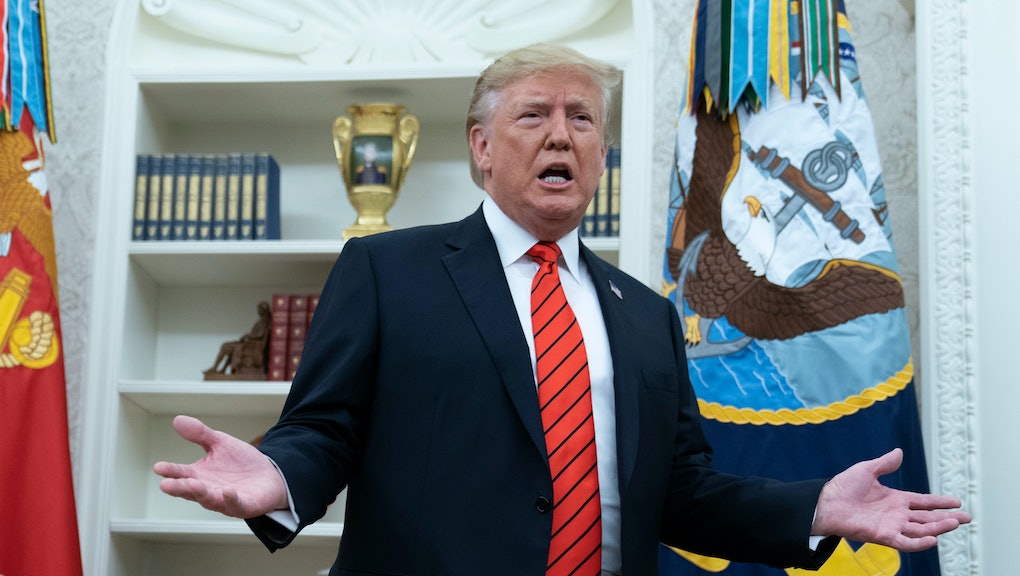 It isn't uncommon for a presidential administration to focus exclusively on data and science that backs up their existing views. It's a little less common to completely ignore every expert and scientist on staff, silencing them and de-funding the agencies and committees that they are a part of while obscuring the facts and data that they produce from the public. According to a new report from New York University's Brennan Center for Justice, the Trump administration's approach to science, including Trump's own climate change denial, has veered toward the latter and the result is that we have now reached a "crisis point" where the federal government is actively undermining objective facts for political gain.

The report — written by a bipartisan group that was led by former United States attorney Preet Bharara and Christine Todd Whitman, who served as head of the Environmental Protection Agency for George W. Bush — found that while every administration has in some way threatened our reliance on science, the Trump administration has accelerated the process. There are now weekly violations occurring that erode the independence of scientists and devalue their work, according to the researchers.

It's not hard to find examples to back up this claim because the Trump administration has made a habit out of completely ignoring and suppressing science. It may seem like it happened years ago now (because everything is terrible and new, unimaginable violations of norms happen every single day) but just one month ago, the Trump administration declared an all-out war on meteorologists because the president falsely claimed Hurricane Dorian was going to hit Alabama. It didn't — and never really was projected to — but because Trump said it, his administration went into overdrive to rebuke any person who suggested he was wrong. That included the administration's own National Weather Service, which dared to correctly state that Alabama was not at risk of being affected by the hurricane.

For as absurd as that situation was, at least it played out in public, where the effort to suppress science is transparent and easy to see. Some of the worst violations happen behind closed doors and attempt to reshape fact to fit the president's agenda. Perhaps the worst violations committed by the current administration relate to climate change, which President Trump, as he has said repeatedly, doesn't believe is real. In order to reflect that, massive amounts of information on the topic was removed from the Environmental Protection Agency's website. More than 200 government web pages that were set up to help spread information about our climate and the environment were altered to remove references to climate change, according to the Environmental Data and Governance Initiative. Earlier this year, the White House attempted to stop a senior intelligence analyst at the State Department from talking about climate science during a congressional hearing. That's a move that has been fairly common for this administration, which also instructed the EPA to block its own scientists from presenting climate research. According to the Columbia Law School, there are more than 379 documented incidents of the Trump administration actively attempting to silence scientists by preventing their research from being made public, restricting the types of research that can be done and choosing not to publish findings.

Of course, one way to make sure that scientists don't have much to talk about is making sure they don't have the money to continue their research in the first place. In 2018, President Trump proposed a budget that would cut funding for the National Oceanic and Atmospheric Administration (NOAA), U.S. Geological Survey and EPA by nearly 20 percent. Those cuts only got deeper this year, when the administration proposed its budget for 2020. The EPA, already hampered by a shrinking budget, would have its funding cut by another 31 percent. The National Science Foundation is set to see a nearly 10 percent cut, as well. Earlier this year, as part of an administration-wide effort to cut back on the number of committees across agencies, Trump decided to end funding for two important environmental boards. These committees are staffed by experts in specific areas, armed with the knowledge and research to help provide insight and understanding to government agencies. They fill in the gaps of knowledge when agencies are looking into new policies. But in the Trump administration, expertise is not needed. Facts are not defined by research, but rather by what the president says.

Trump is not the first president to seek out information that fits his agenda. As the report from New York University pointed out, the George W. Bush administration was also guilty of doing things like suppressing information and trying to undermine its own scientists. An Inspector General's report found the administration intentionally added uncertainty to scientific findings, changed report titles, removed controversial terms like "global warming" and in some cases even altered quotes from scientists and experts. Even the Obama administration was guilty of this at times, using misleading phrases in public draft reports to downplay the impact fracking could have on surrounding areas. But no administration has taken it to the extremes that Trump and his cohort have. The current administration doesn't just seek out facts that fit its narrative, they have taken to actively silencing experts, undermining scientific consensus, and taking away funding from any agency and organization that may produce data that it doesn't like. There is picking and choosing facts, and there is making up new ones entirely. This administration has opted for the latter.