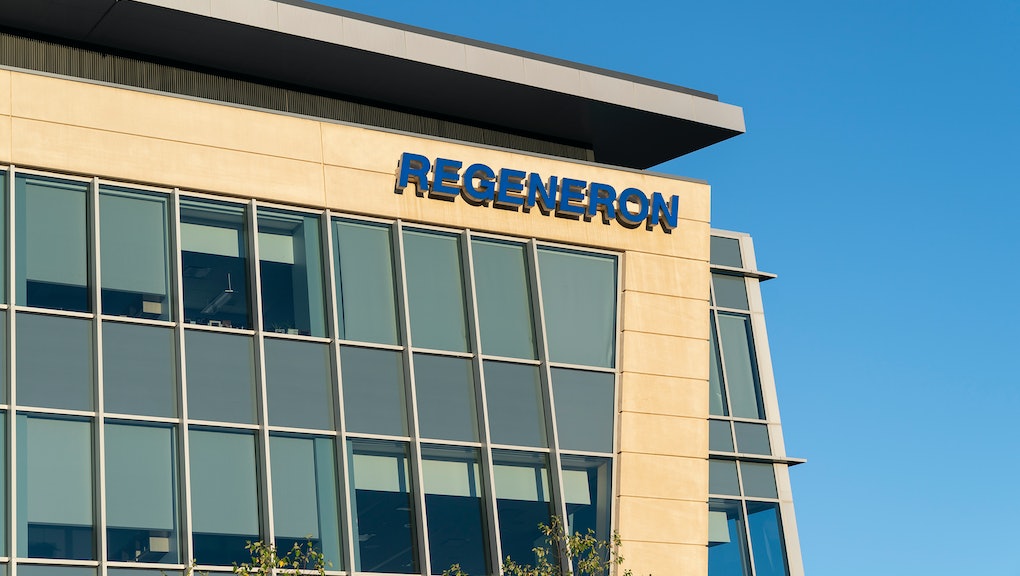 President Trump received an experimental treatment under development by Regeneron Pharmaceuticals after testing positive for coronavirus, his physician, Sean P. Conley, wrote in a letter the White House released Friday, The New York Times reports. Here’s what you need to know about Regeneron’s experimental antibody treatment.

The Regeneron drug is a cocktail of two monoclonal antibodies, synthetic versions of the antibodies that help defend our bodies against infection, developed using mice genetically engineered to have immune systems similar to ours, STAT explains. In laboratory studies, the antibodies latched onto the spike protein the novel coronavirus relies on to infect our cells.

In a study of 275 coronavirus patients — none of whom were hospitalized, unlike Trump — novel coronavirus levels appeared to decline faster in nasal swabs from those who received the Regeneron antibody treatment than in nasal swabs from those who received a placebo, according to STAT. The reduction was most striking in patients who didn’t churn out enough of their own antibodies. On average, symptoms lasted around a week in the antibody treatment group, and about two weeks in the placebo group, per the Times.

Physicians gave Trump the higher of two doses of the antibody treatment the company is currently studying in COVID-19 outpatients, per the Times. Conley noted that Trump has also taken vitamin D, zinc, famotidine (the generic name for Pepcid), melatonin, and daily aspirin. Some of these drugs have been assessed as COVID-19 treatments, but none have proven to be effective.

Monoclonal antibodies appear promising for viral infections, but producing them is costly and challenging, raising questions about scalability, the Times reports, although the federal government has granted Regeneron over $500 million to produce its drug ahead of the completion of clinical trials. The company also recently unveiled a collaboration with Roche to expand its global supply.

The Food and Drug Administration hasn’t granted the Regeneron treatment emergency use authorization, according to the Times. Trump received the treatment under a so-called single patient investigational new drug application, which is for patients “with certain established criteria and a review committee,” according to a statement from the company, STAT reports.

“When it’s the president of the United States, of course, that gets — obviously — gets our attention,” Leonard S. Schleifer, Regeneron’s CEO, told the Times. It’s worth noting that Schleifer and Trump are chummy: Schleifer has been a member of Trump’s Westchester County golf club for years.

Trump’s access to the Regeneron drug could complicate the clinical trial process needed to confirm that it really does work. Before news broke that Trump had received the Regeneron antibody treatment, Daniel Skovronsky, chief scientific officer at Eli Lilly, said patients could only access his company’s antibody treatment — which also seems especially encouraging — by enrolling in a clinical trial, in which researchers might also randomly assign them a placebo, according to the Times. This way, they can definitively trace any difference between the treatment and placebo groups to the treatment.

Skovronsky worries that if Eli Lilly were to hand out the drug to too many patients, they wouldn’t want to enroll in these clinical trials, per the Times. We saw this happen after the FDA granted emergency use authorization to convalescent plasma in what some criticize as a response to bullying from the Trump administration. Regeneron maintains that its priority is to have enough of its antibody drug for clinical trials, company spokesperson Hala Mirza told the Times.

Trump receiving the Regeneron antibody treatment might also affect the limited supply available for compassionate use requests, which grants access to experimental treatments outside of clinical trials only under extraordinary circumstances on a case-by-case basis, the Times noted. George Yancopoulos, president and chief scientific officer of Regeneron, said the company anticipates a flood of requests for its antibody treatment.

Experimental drugs warrant skepticism as a general rule, but that’s especially the case given Trump’s track record of prematurely trumpeting coronavirus treatments. Although we all hope for a cure, only rigorous, placebo-controlled clinical trials will truly establish whether Regeneron’s antibody cocktail works against the disease.