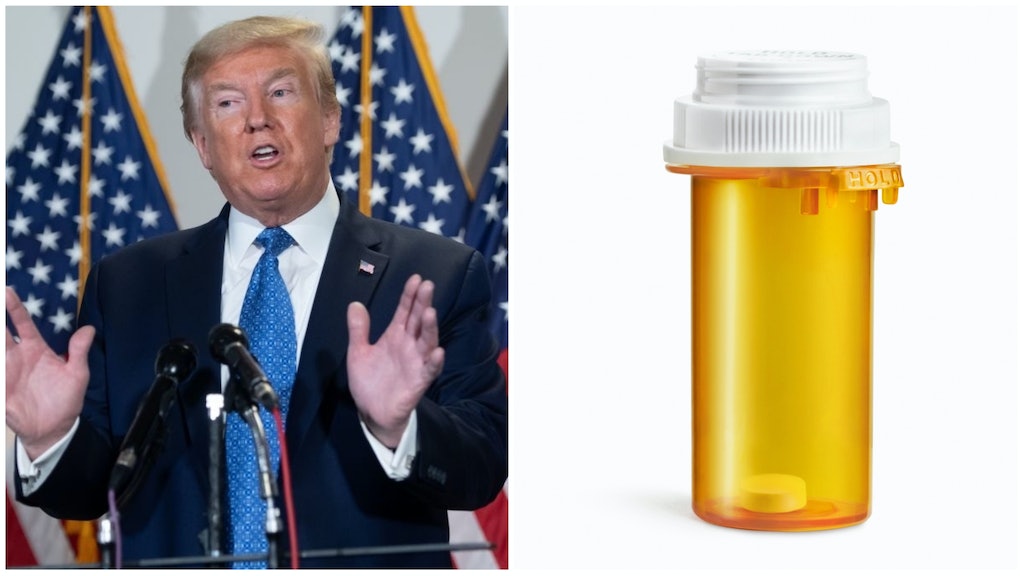 Trump's hydroxychloroquine obsession is slowing the search for a coronavirus treatment

On Monday, President Trump said he’d begun taking hydroxychloroquine to stave off the novel coronavirus disease, bolstering his already robust support for the drug. Experts agree that only rigorous, placebo-controlled clinical trials will determine whether it can truly prevent infection with the virus or treat early stages of the disease it causes, COVID-19. Yet Trump’s zeal may be disrupting such trials, leaving scientists unable to answer these questions, the New York Times reports.

Although Trump has even gone so far as to praise hydroxychloroquine— used for malaria, as well as autoimmune diseases like lupus — as a “miracle,” medical experts paint a murkier picture, per The Times. Recent research has found that it didn’t help people hospitalized for COVID-19 and may elevate the risk of death. The FDA has cautioned it could cause heart problems, and Anthony Fauci, director of the National Institute of Allergy and Infectious Diseases, says whether it can help prevent infection or hospitalization remains to be seen.

At a Tuesday briefing, Trump criticized the studies on hospitalized COVID-19 patients as “a Trump enemy statement,” according to the Times.

The drama is dissuading people from enrolling in the clinical trials that would actually help provide definitive data on what hydroxychloroquine can and can’t do when it comes to COVID-19.

The worst-case scenario, according to William O’Neill, an interventional cardiologist at Henry Ford Hospital in Detroit, who is studying hydroxychloroquine as a preventative measure in healthcare workers: “At the end of this epidemic, in late September, we don’t have a cure or a preventive because we let politics interfere with the scientific process."

Researchers told the newspaper the drama was dissuading people from enrolling in the clinical trials that would actually help provide definitive data on what hydroxychloroquine can and can’t do when it comes to COVID-19. “People who had already enrolled would say, ‘Now I’m afraid, I want to disenroll,’” said Deneen Vojta, executive vice president for research and development at UnitedHealth Group per the Times. The insurer is carrying out a smaller study of the drug.

Meanwhile, Adrian Hernandez, director of the Clinical Research Institute at Duke University School of Medicine, has been working on enrolling participants in a clinical trial of hydroxychloroquine as a means of preventing COVID-19 in healthcare workers, the Times reports. Initially, two-thirds of more than 12,000 healthcare workers in a COVID-19 registry had wanted to enroll, but now only half want to do so. Because debates about the drug are unfolding in the media, people will rely on what they hear most from the media to guide them, he notes.

On the other side of the country, Christine Johnson, an associate professor of medicine at the University of Washington, told the Times that her clinical trial of hydroxychloroquine in people recently infected with the novel coronavirus has also suffered from dwindling enrollment. She’s trying to enroll 630 participants in her trial.

Since Trump began touting hydroxychloroquine, reports have surfaced of increased demands and shortages, as well as people taking it, and products with the same active ingredients, with zero medical supervision. The complication of research that would allow us to finally get concrete answers about its potential seems to be only the latest of many ripple effects of his misstatements about the drug.

More like this
MDMA-assisted therapy will be here soon, according to a new study
By Melissa Pandika
To legalize weed successfully, we need to draw inspiration from Canada
By Michael J. Armstrong and Paul Seaborn
The push to legalize psychedelics has ignored Indigenous communities
By Suzannah Weiss
Stay up to date