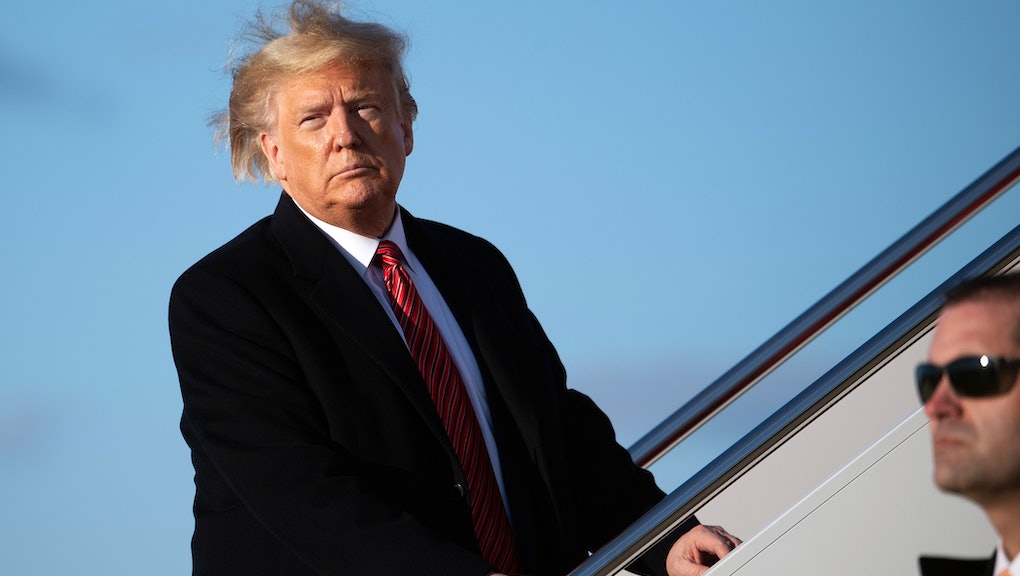 He's bragged it's his "Winter White House," used it as an impromptu base of operations during a nascent international crisis, and listed it as part of his bungled attempt to cast a ballot in Florida, but when Donald Trump is ignominiously booted from Washington, D.C., in January, he may not be able to call Mar-a-Lago home.

In a letter delivered to the government in Palm Beach, Florida, neighbors of the president's storied members-only club demanded the city notify Trump that any plans to turn Mar-a-Lago into his permanent residence would be in violation of an contract he signed nearly 30 years ago.

The warning, obtained by The Washington Post, encourages the city to remind Trump of the 1993 agreement, which put limits on the length of time Mar-a-Lago club members could stay on the property. At the time, Trump's attorney vowed his client would not use the club as his home — a promise that, if broken, could create "an embarrassing situation" the letter stated, suggesting the president might be forced to leave the property after declaring it his residence.

This is not, in fact, the first time Trump has attempted to have Mar-a-Lago's "most beautiful piece of chocolate cake" and eat it too. Earlier this year the president quietly withdrew a request with the city filed two years earlier to build a dock on the property, shortly after the Post obtained copies of the 1993 agreement between Trump and Palm Beach.

"It’s one or the other — it’s a club or it’s your home,” Reginald Stambaugh, an attorney representing one of Trump's Mar-a-Lago neighbors at the time, told the Post earlier this year. “You can’t have it both ways.

A Trump organization representative, speaking anonymously to the Post, pushed back on the neighbor's assertion that the president is not allowed to live on the premises. "There is no document or agreement in place that prohibits President Trump from using Mar-a-Lago as his residence," the spokesperson said.

The president has plenty of other properties from which he could choose to live — most of which do not represent threats to national security, as Mar-a-Lago seems to. Although Trump has officially abandoned his New York City residency, first lady Melania Trump has reportedly been pushing for a return to Manhattan, where she also spent the first several months of her husband's presidency. The city, meanwhile, doesn't seem all that thrilled at the prospect of return of the Trumps — any of them, really.

Given Trump's reported aversion to sleeping anywhere that doesn't already have his name on it, his options for a post-presidency place to call home are still pretty expansive. If Mar-a-Lago does indeed end up being a bust, there's plenty of other gold-plated monuments to his massive ego he can always fall back on.