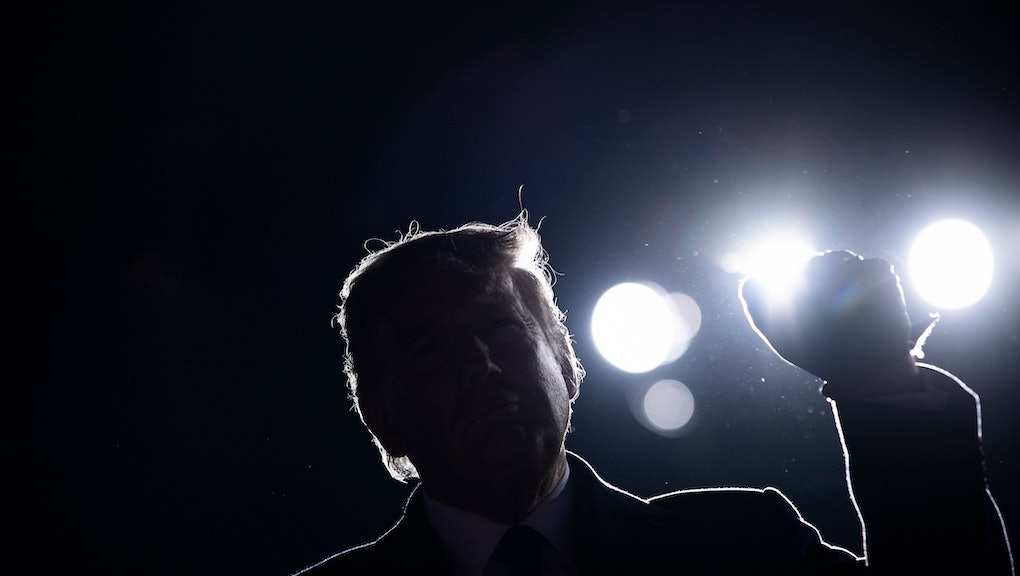 President Trump frequently ends his MAGA rallies by blasting the Rolling Stones' iconic song "You Can't Always Get What You Want" over the PA system, leaving attendees to shuffle around awkwardly while Mick Jagger drones on and on about not always getting what you want, but sometimes getting what you need. On Tuesday night at the president's rally in Omaha, Nebraska, that (highly debatable) truism was put to the test, when hundreds of attendees did not get what they wanted (promised post-speech campaign buses to take people back to their vehicles parked miles away), but were instead given what they needed (emergency medical care after standing in near-freezing temperatures for hours while waiting for the expected shuttles, long after the president had left on Air Force One), proving once and for all that the Trump campaign is nothing if not a massive exercise in bludgeoning people over the head with the dumbest, most obvious metaphors imaginable.

At least 30 people — among them both elderly and underage attendees of the president's speech — reportedly required medical attention while stranded at Eppley Airfield, after the Trump campaign effectively stranded hundreds of rally-goers outside in frigid cold weather for hours. The campaign blamed higher-than-expected attendance for the lack of buses necessary to bring people the two-and-a-half miles from the rally site back to their cars. Omaha police, meanwhile, cited foot traffic clogging the route between the rally site and the parking lot as one reason for the delays.

"Is there any place you would rather be than a Trump rally on about a 10-degree evening?" the president joked earlier during his speech. "It's cold out here but that's okay."

But when the president finished talking at around 9 p.m., hundreds of the estimated 25,000-plus attendees were left to figure out how best to get out of the crowded rally site and back to the warmth of their homes, with some attendees telling local news outlets they weren't able to get back to their cars until after midnight.

"We were all parked over at Eppley," Kris Beckenbach told the Omaha World Herald. "We were three-and-a-half miles through darkness to get there. There was no direction given. I expected at the end of the rally somebody will say, 'Go this way and there will be buses waiting.'"

According to Beckenbach, there had been a gap of around an hour and a half between when one round of buses departed and when they returned. One reporter on the scene said police estimated they needed at least "30 more" buses to service the stranded rally-goers. Eppley Airfield operations manager Tim Schmitt later confirmed that multiple attendees were hospitalized after the rally, but did not offer a specific number.

"I've got an elderly male that's down 10 blocks ... having a hard time breathing right now," one police dispatcher said in audio obtained by NBC News. Another dispatcher announced that their "subject says he's about to pass out."

Omaha police told Teen Vogue that there were about 40 buses used during the rally, that they were prioritized for people with disabilities who were in attendance, and that additional buses were requisitioned over the course of the evening.

While the image of the president jetting out of town aboard a state-of-the-art aircraft while his most fervent supporters literally freeze is perhaps a little too on the nose, metaphor-wise — particularly given the fact that the thousands of attendees had already risked their health by cramming together in the midst of a viral pandemic — it should not be lost in the "is this irony, or inevitability?" debate that Trump's very appearance in Nebraska is a sign of just how worried he is about the upcoming presidential election. In 2016, Trump took the traditionally red state by double digits over Hillary Clinton, but this year Joe Biden is poised to win at least one of the state's electoral points, which are split between statewide and district winners. The fact that a Republican candidate is campaigning there at all reveals a cold, hard truth.

More like this
Oops, the Arizona recount the MAGA crew demanded actually took votes away from Trump
By Rafi Schwartz
This poll shows just how strong Trump's hold on Republican voters is
By AJ Dellinger
Trump's brilliant 2022 strategy is for Republicans to get into a messy intra-party fight
By Rafi Schwartz
Stay up to date