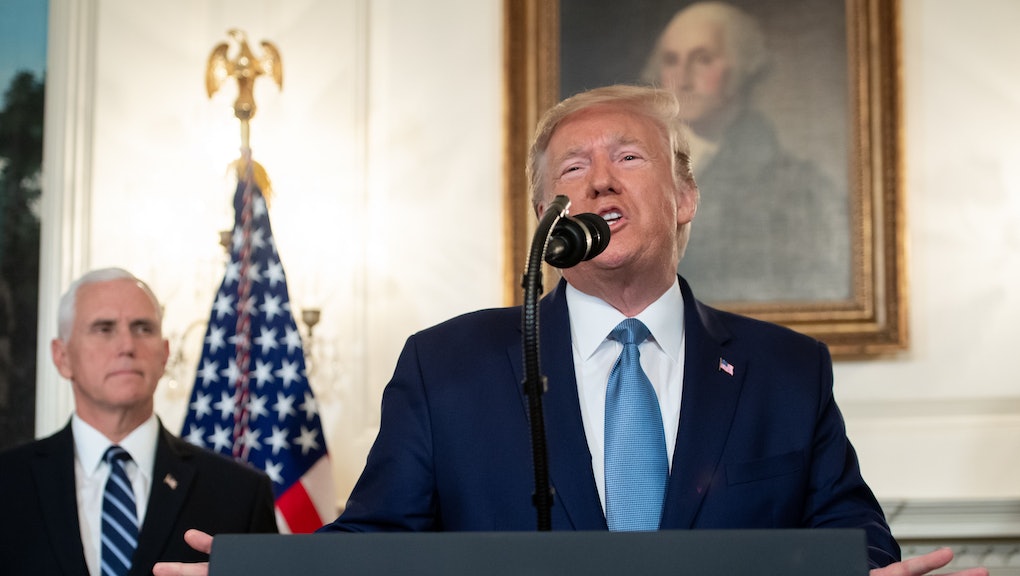 The Trump administration released a new draft of immigration regulations that outline who will be considered for asylum claims and what procedures they must follow to successfully gain legal entry to the U.S. The 161-page document is a combination of restrictions previously implemented by the administration and later struck down by the courts, as well as new rules and regulations that make it near-impossible to claim asylum.

The Trump administration's new asylum regulations are in keeping with his record of being a generally anti-immigrant president. According to the draft, the rules are "an expression of a nation’s foreign policy" and "an assertion of a government’s right and duty to protect its own resources and citizens, while aiding those in true need of protection from harm."

But what "true need" means remains to be seen, and under the proposed regulations agents of the Department of Homeland Security and immigration court judges would have greater ability to deny someone's asylum claim based on stricter definitions of already subjective language regarding one's "reasonable possibility" of persecution and "credible fear" of violence if they were forced to return to their home country. (Mic reached out to DHS and the Justice Department for comment and did not receive an immediate response.)

The proposed regulations demand that someone seeking asylum must prove that there's a "reasonable possibility" of persecution or torture — that they would "suffer severe pain or suffering, whether physical or mental, in the country of removal and a reasonable possibility that the feared harm would fall within the definition of torture." While the language might seem like it outlines the standard rules of claiming asylum, if enacted, the new rules would force a person to demonstrate what would likely happen, rather than what they fear would happen, if they were not granted asylum. That is to say: Asylum seekers will need to bring evidence, rather than rely on emotion-based testimony.

Under the proposed regulations, the administration will also hold to a higher standard or reject asylum claims by those who "failed" to apply for asylum in a previous country through which an applicant may have traveled. For instance, if a person traveled through Mexico but did not apply for asylum in Mexico, it would be more difficult for them to claim refugee status in the U.S. The draft states that the administration believes not applying for asylum in another country reflects an "increased likelihood that the [applicant] is misusing the asylum system as a mechanism to enter and remain in the United States rather than legitimately seeking urgent protection."

The document also outlines new "procedural requirements" a person needs to fulfill to claim persecution based on belonging to a "particular group." Not only does the document outline what a "group" is and is not (basically, a person is a member of a "group" if they have an immutable characteristic that could bring them harm), but it also demands that an asylum applicant "define the proposed particular social group as part of the asylum application or otherwise in the record." If they don't, they wave any claim to that "group" and thus, their claim to asylum for belonging to it.

Again, this is tricky. It may be difficult to prove that someone is subject to violence because of their sexuality specifically, for instance, as opposed to any other characteristic, even if the applicant understands that that was the case. And with so much discretion left to the judge and so much vagueness in the law, it may be easier to reject asylum claims.

The Trump administration believes that these regulations will help reduce what it sees as a number of "frivolous" or "non-meritorious" asylum claims. (In reality, there's little evidence of false asylum claims.) If someone's claim is determined to be "frivolous," they won't be able to claim asylum in the future. Meanwhile, these rules and regulations that raise the burden of proof for asylum seekers may endanger them more: Previous anti-immigration rules, like the Migrant Protection Protocols (also known as the "Remain in Mexico" policy), have endangered immigrants by forcing them to wait in Mexico while their immigration claim is adjudicated, where even a government lawyer has admitted they are vulnerable to rape, kidnapping, and human trafficking.

The new rules are alarming for some hidden reasons, including the fact that adding complexity to the law means that there are more ways someone can accidentally or inadvertently apply for asylum incorrectly. Moreover, there is no one that walks an individual through the process of claiming asylum or lets them know the specific legal phrases they need to say, which makes the likelihood that an applicant will fulfill the specific new requirements all the lower. For instance, if someone belongs to a protected group, but does not know that they need to state the definitions of that group "on the record" as outlined in the draft, their claim is subject to denial. Someone who's claiming asylum additionally may not speak English or may speak a dialect that an agent or judge doesn't understand.

A number of civil rights and immigrant advocacy organizations will likely challenge the new regulations in the coming months. But unless they are blocked by a judge, these regulations will go into effect.