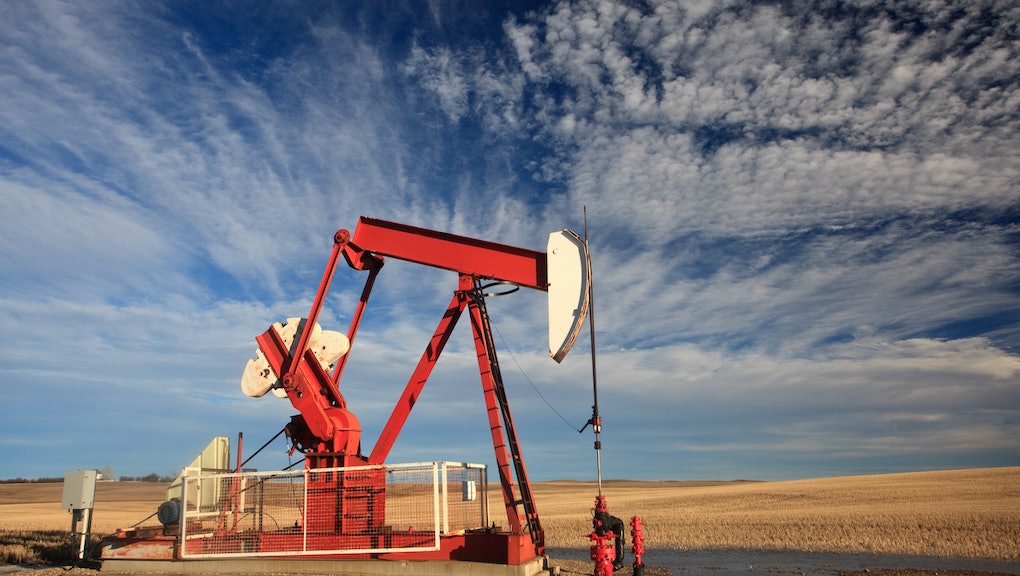 Since he took office, Donald Trump has made it clear that his interests lie not with the environment or the planet that we inhabit but with the oil and gas industry that backed and funded his campaign. To that end, he has spent much of his term repealing rules that protected lands from the disruptive and polluting practice of oil and gas drilling — auctioning off huge swaths of land to the highest bidder. The result, beyond improved profits for the industry interests who benefit from it, has been a significant amount of new greenhouse gas emissions pumped into the atmosphere. According to a new study published by the Wilderness Society, Trump's oil expansion has resulted in a new flood of emissions equivalent to what the entire country of China produces in half a year.

According to the analysis, the Trump administration has made more than 461 million acres of American public lands and waters available for development between the period of time that Trump took office in January 2017 and the latest information made available in January 2020. While that land is spread out across the country, both on land and in offshore areas, combined it would be larger than the state of Alaska. So far, energy companies have leased about 9.9 million acres of that available land and used it for new drilling projects.

While the Trump administration has decided not to keep track of emissions associated with energy projects on public lands, the Wilderness Society took it upon itself to determine just how much pollution these projects are producing. Using modeling tools, the Wilderness Society found that emissions resulting from these auctioned off pieces of land could produce 5.95 billion metric tons of carbon dioxide equivalent. That is more than half of the annual emissions produced by China, the worst emitter of greenhouse gases in the world.

For those concerned about the well being of the planet and the ever-encroaching threat of climate change, drilling taking place on public lands is a worthwhile area to pay attention to. A prior Wilderness Society study found that the life cycle emissions from fossil fuels dug up from public lands through the federal leasing program are responsible for over 20 percent of the United States' total greenhouse gas emissions. These are areas where the federal government and environmental agencies should be able to exert control to protect the land and minimize emissions and pollution, enforcing protections in exchange for allowing these practices to take place on land that it controls.

That has unfortunately not been the Trump administration's approach to the situation. Instead of simply protecting the lands, as the Obama administration largely did before it, Trump has opted to open up parts of the country previously never made available for drilling — and undo many of the government's options for controlling how this land is used. Since first revealing his so-called America First Energy Plan, Trump has made clear that allowing drilling for previously untapped oil and natural gas would be a priority. Trump claimed that "America has been held back by burdensome regulations on [its] energy industry," with an upwards of $50 trillion worth of fuel that can be monetized sitting beneath the earth's surface. To get to it, the Trump administration has taken action to push borders of previously protected areas inward. The administration has made efforts to shrink areas surrounding national monuments that were previously designated to be left alone. Additional protections meant to keep energy companies out of federal and Native American lands have also been lifted. Similar efforts have been made off the shores of the country, with the goal of increasing the amount of off-shore drilling. Rules that were designed to preserve coastal areas near oceans and the Great Lakes have been completely ditched.

In the mind of Trump and his cohorts, this approach has largely been successful. After all, the United States has become largest oil producer in the world under Trump's watch (though it already had the largest oil reserve in the world, with more barrels available than economies that rely on the resource, like Russia and Saudi Arabia). But to accomplish that task, the administration has sacrificed just about every protection designed to ensure that fossil fuel companies don't do more damage than needed. Trump decided to toss out offshore drilling safety regulations originally put in place to prevent another oil spill like the 2010 disaster in the Gulf Coast — which poured more than 4.9 million barrels of oil into the Gulf of Mexico. On land, Trump has given tacit permission to oil and natural gas extractors to pollute with abandon. The administration no longer requires these companies to report methane emissions that result from drilling projects. To pile on to that, it has also partially lifted a rule that was meant to limit the amount of methane emissions allowed on public lands — granting companies more freedom to behave recklessly, given that they don't have to report their behaviors and the government is largely hands off in monitoring these drilling efforts. Even when these projects have run their course, Trump has granted companies free reign to operate. His administration has made it so companies no longer need to prove they can pay for the cost of removing an oil rig after drilling. Essentially, Trump has turned public lands into an unregulated, unprotected drilling paradise — and as the Wilderness Society found, energy companies have been more than happy to take advantage.

The way that the Trump administration has approached oil and gas drilling on federal lands has been the complete opposite approach of how the Obama administration before it tackled the issue. That administration — which acknowledged the reality of human-caused climate change, rather than denying it and trying to erase it at every turn — banned the use of leased federal land for the purposes of coal mining. That policy recognized the federal government's ability to exert control over large swaths of land and to limit the types of behaviors that lead to large amounts of emissions being pumped into the atmosphere. While the Trump administration views these types of policies as taking away opportunities from fossil fuel extractors, it's the opposite: that land is protected to start with, and the government is making the decision to open it up through these leasing programs.

Basically no other potential administration would approach things this way. Every Democratic candidate running for president in 2020 has explicitly stated that they will end leasing on federal lands for fossil fuel extraction. That includes once again restricting coal mining as well as adding new rules that would effectively ban oil and gas drilling. The government does not have to open its lands up to be drilled and destroyed by fossil fuel companies. That is a choice that the Trump administration has made, in large part because many of his biggest donors come from this industry. Protecting that land is part of the government's role in protecting the environment, and should be treated as such.