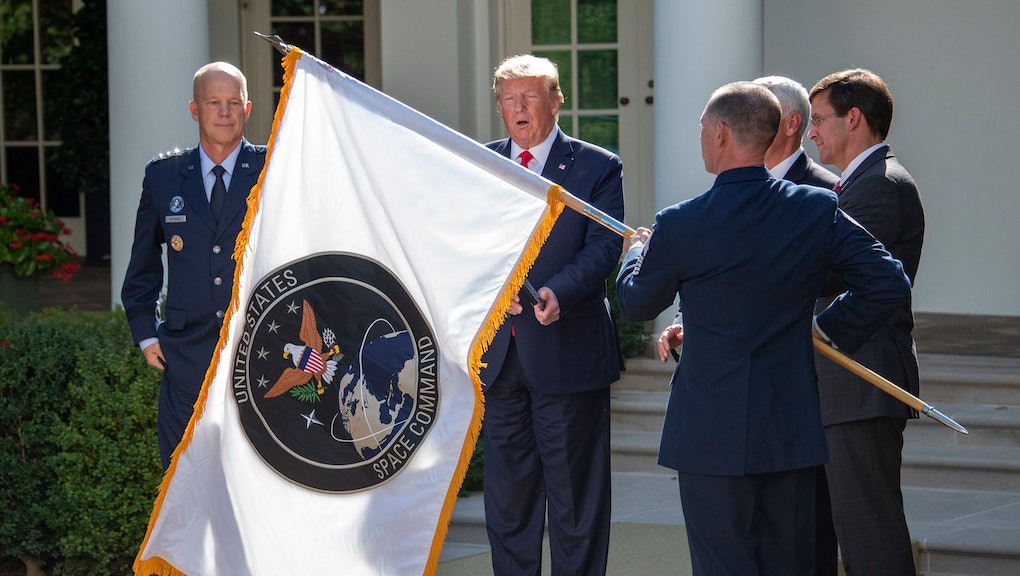 When the 2020 National Defense Authorization Act (NDAA) passes through Congress as it is expected to, it will make President Trump's sought-after Space Force a reality. The so-called sixth branch of the United States military was imagined by the administration to handle space warfare, but we're still a long way from participating in our own version of Star Wars. Here's what exactly Trump has in mind for his space-based military program — and just how far the latest funding will get him toward that goal.

Where did Space Force come from?

President Trump has been touting the idea of Space Force since March 2018. He first raised the idea of the military expansion while giving a speech in front of a group of Marines at the Miramar Marine Corps Air Station in San Diego, California. "“Space is a war-fighting domain just like the land, air, and sea,” he told the audience before putting a name to the theoretical fighting force, albeit through a couple of jumbled sentences: “We may even have a space force —develop another one—space force. We have the Air Force, we’ll have the space force."

The idea at first was not particularly well received, even by the President, who had the idea in the first place. After explaining that the idea came to him while thinking about space, Trump admitted that "I was not really serious" when he first came up with it. But then he quickly changed his tune, calling his own idea "a great idea" because it would be a "big, breaking story." But while Trump claims to have come up with the idea on his own, the first iteration of Space Force was raised before the idea ever popped into the President's head. In 2017, the House of Representatives proposed a piece of legislation that would direct the Department of Defense to create a "space corps" that would operate under the guidance of the Air Force. Heather Wilson, the Air Force secretary and a Trump appointee, publicly opposed the idea. She said that "The Pentagon is complicated enough," and the creation of a space initiative would "make it more complex, add more boxes to the organization chart and cost more money." Then-Defense Secretary Jim Mattis also shot down the proposal, saying that it was unnecessary to focus on an entirely new domain "at a time when we are focused on reducing overhead and integrating joint warfighting functions.”

Yet a year later, Trump pushed away the objections of his own appointees and not only proposed creating a so-called "space corps" but expanding it into its own entire branch of the military called Space Force.

What would Trump's Space Force be?

The closest thing we have to an image of what Space Force would be, other than Trump's occasional rambling statements about it, comes from a five-year plan submitted by the Pentagon to Congress earlier this year. The document requested $2 billion over a five year period to establish the military branch. It would staff up to 15,000 personnel in total in that time. A 2018 report submitted by the Department of Defense to Congress called for new offensive systems in space that could "degrade, deny, disrupt, destroy, and manipulate adversary capabilities”. It's safe to say that the expectation is Space Force would be tasked with building and operating those systems, as well as running space training missions with U.S. allies. While there are some existing guidelines for placing weapons of war in space, they remain incredibly vague and likely don't restrict anything other than weapons of mass destruction and nuclear weapons from being placed in orbit. Given that, establishing an offensive fighting force that can operate beyond the United States' terrestrial domain appears to be the primary purpose of Space Force. Of course, actual warfare taking place in outer space seems a long way off, so for day-to-day operations, it has been suggested that Space Force could take over the Air Force's duty of tracking satellite activity.

This Pentagon proposal doesn't fully capture what Trump likely wants Space Force to be, but that is in large part because actually building up a sixth branch of the military with all of the same operations as its peers would be next to impossible to gain support for. An Air Force report from 2018 suggested that setting up Space Force would cost as much as $13 billion. The $2 billion proposal is an incredibly streamlined version, leaning heavily on existing space-related operations from other branches of the military and using existing recruitment services to staff up rather than create a Space Force version of ROTC. The Pentagon's proposal basically just shifts a bunch of resources around to create something that would appease President Trump.

What Space Force will likely be in reality

Odds are, Trump's Space Force won't come to fruition like he has imagined it. The 2020 NDAA set aside $72.4 million for stand-up costs — essentially the amount that has been set aside to get the whole operation started. Even with that money set aside for jumpstarting the operation, Space Force will not operate as its own branch of the military. It will fall under the Department of the Air Force, as was originally planned for the "space corps" concept that was proposed back in 2017. According to a report from Military.com, because the operation will take place under the Air Force's umbrella, it will likely require that military branch to shift some of its personnel over to the new operation. That personnel will likely come from the Air Force's existing Space Command, which has been in operation since 1982. What, if anything, will be different about their objectives while working under the Space Force banner rather than Space Command, is yet to be determined.

The relatively small budget set aside for Space Force will go toward establishing a headquarters for the operation and laying out plans for the branch's future. It will be guided by the directive to "protect the interests of the United States in space; deter aggression in, from, and to space; and conduct space operations," as established by the NDAA. President Trump will get to appoint a general to the role of "Chief of Space Operations," which will report directly to the secretary of the Air Force — though the position might simply go to General John "Jay" Raymond, who currently serves as the Space Command commander — a position he was appointed to by President Trump. Whoever gets the role will have to report to lawmakers once every 60 days until March 31, 2023 to update them on the status of the operation. A new, Senate-confirmed position will also be created that will oversee the purchase of all space equipment. That role will be the assistant secretary of the Air Force for Space Acquisition and Integration.

All of that may be a bit presumptuous, though. There's a chance that Space Force never quite makes it off the ground. By all accounts, Democrats in Congress who vote for the NDAA approval — Space Force budget and all — did so with no intention of actually supporting the military operation. The $72.4 million was provided as a bargaining chip by lawmakers to secure parental-leave benefits for the federal workforce. Those benefits could cost as much as $3 billion over a period of five to 10 years (there is some disagreement over the figures) but regardless of the time frame, it's a significantly larger win for Democrats and the federal workers who endured the longest government shut down in history less than one year ago. If Trump loses re-election in 2020, his Space Force dreams may disappear under a new administration's defense strategy. The parental-leave benefits likely won't go anywhere, though. So much for the art of the deal.