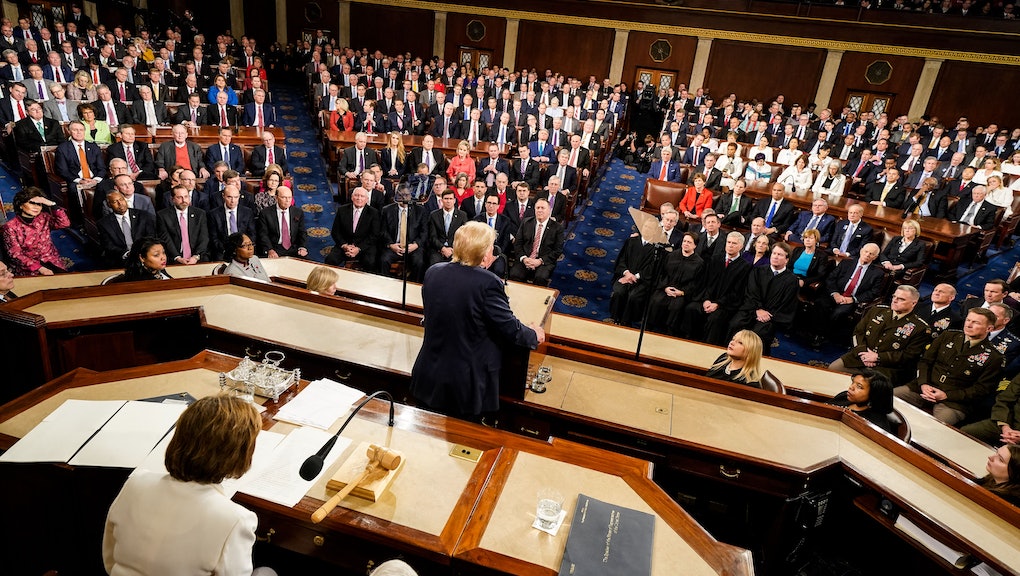 Donald Trump is many things; chastened is not among them. Last night, his State of the Union address showed the president chafing against the yoke of impeachment, totally unbowed as he talked up his achievements and gave a Presidential Medal of Freedom to radio host Rush Limbaugh, a man who has a prominent history of saying racist things. “In just three short years, we have shattered the mentality of American Decline and we have rejected the downsizing of America’s destiny,” he said during his 78-minute speech. “We have totally rejected the downsizing. We are moving forward at a pace that was unimaginable just a short time ago, and we are never, ever going back!”

“The state of our union,” he added, “is stronger than ever before.”

If any of the president’s critics within and without his party thought that the impeachment process would lead to an ounce of self-reflection or shame, then they were either foolhardy or lying for appearances. You can probably throw Maine Sen. Susan Collins (R) into the second camp; after announcing on the Senate floor Tuesday afternoon that she would vote to acquit Trump, Collins explained the decision to CBS News, saying that she thinks Trump “has learned from this case” and “will be much more cautious in the future.”

No, Trump seemed to be saying with his stunt-filled State of the Union performance, I will not. Though he didn’t mention impeachment at all, his speech was essentially a non-stop parade of swaggering bombast with nary a hint that the impeachment circus might have tamed his approach. “To those watching at home tonight, I want you to know: We will never let socialism destroy American health care!” Trump said.

The night had the distinct tone of reality TV, marked by a series of gestures whose tone seemed ripped from rose ceremonies and ritualistic on-air firings. The award of the Presidential Medal of Freedom to Limbaugh, who recently announced an advanced cancer diagnosis, was one such moment. Trump thanked Limbaugh for “decades of tireless devotion to our country,” which feels like a strange thing to say about a man who is largely known for spouting racism, paranoia, and propaganda in service of a political agenda. Limbaugh’s greatest hits of abysmal behavior is nearly endless, but one exemplary moment is the song he sang about the previous president, titled “Barack The Magic Negro.”

In another TV-ready moment, Trump orchestrated a surprise reunion for the wife of a soldier with her husband, who’d returned from overseas. He also invited on-stage the brother of a man named Rocky Jones, who was killed by an undocumented immigrant in what Trump described as a “gruesome spree of deadly violence.”

“Our hearts weep for your loss,” Trump told the brother, Jody Jones, “and we will not rest until you have justice.” Never mind that there is no connection between the number of undocumented immigrants and the crime rate, as a joint analysis from The New York Times and The Marshall Project showed last year.

At the outset of the whole affair, Trump refused to shake the outstretched hand House Speaker Nancy Pelosi offered him. In response, Pelosi turned to similarly operatic gestures. Immediately after the president concluded his remarks, she ripped up her copy of the speech and threw the pieces into the air, a move nearly as empty as the presidential grandstanding that preceded it. Democrats in the audience got into the circus-like atmosphere as well — when Trump talked about how “people” want to take away healthcare, they responded “You!” They also made a chant out of a drug pricing bill that’s been stymied by Senate Majority Leader Mitch McConnell.

If one thing was markedly clear Tuesday night, it’s this: Everybody has given up the act. Pelosi’s eye-rolling and paper-ripping behind the president’s back is just as meme-able as Republican congressmen breaking out in a chant of “four more years” — which really happened, by the way, near the start of Trump’s speech in a scene resembling a raucous frat party. This is governance now, and it’s been undeniably remade in Trump’s image.