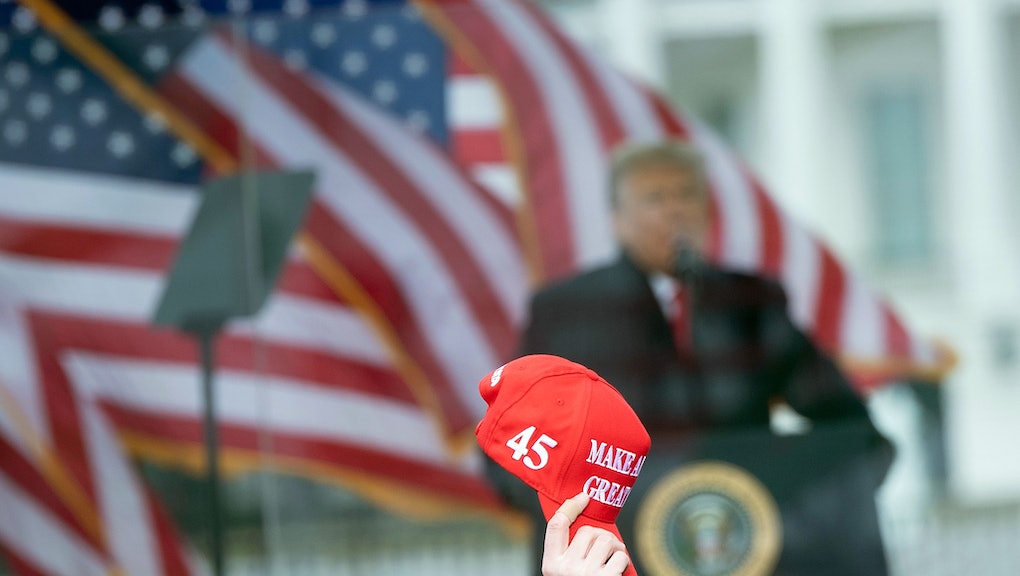 When President Trump took the stage at Wednesday's "Stop the Steal" rally in Washington, D.C., he was 45 minutes late and immediately beset by technical troubles that left the crowd of mask-less racists, conspiracy theorists, and street brawlers straining to hear their dear leader as he bellowed into a bricked microphone.

It went downhill from there.

Over the course of more than an hour, the president rehashed some of the greatest hits of his political career, ranting about the media and Twitter, regurgitating debunked lies about his 2020 electoral loss, and rattling off a growing a list of enemies, some with familiar names (Hillary Clinton, still) and some new ones thrown in for good measure (hello Attorney General Bill Barr). The speech, which oscillated between enthusiastic bombast and deflated pro forma, might well be Trump's last large-scale address as president. As such, it should be remembered not as marking the end of his time in office, but as a preview of the horrors he intends to unleash moving forward.

Time and again during his remarks, Trump made clear that he had no intention of admitting his clear electoral defeat, exclaiming that "We're going to have to fight much harder." Yet he also simultaneously signaled that no matter what happens in the coming days, he plans to maintain — and even tighten — his stranglehold on the GOP, not to mention the country at large.

"We gotta get rid of the weak congresspeople," Trump exclaimed at one point. "The ones that aren't any good." It's a threat the president's firstborn son Donald Trump Jr. echoed earlier in the day, telling the crowd before his father's speech that "if you're gonna be the zero and not the hero, we're coming for you, and we're going to have a good time doing it." Eric Trump, Trump's second son, said something similar Tuesday.

This, more than any other part of the president's terrifying speech — and between his xenophobic warnings about "caravans," lies about election integrity, ominous warnings to Vice President Mike Pence, and general self-aggrandizement, there was plenty to be terrified of — is the real message Trump sought to convey: He's not going anywhere, the GOP's base of support is fully his to command, and he will absolutely use his influence to shape the Republican Party in his own image moving forward. Not only that, but he'll in fact weaponize his rabid followers to punish anyone he feels has wronged him so far, Democrat or Republican.

After promising to lead the crowd to the steps of the Capitol, where as he was speaking, Pence had committed to overseeing the ratification of the electoral college vote without incident, Trump instead returned to the White House, ensconcing himself in the secure trappings of his official authority while he still could. His supporters, meanwhile, began to violently storm various Capitol Hill buildings, energized by the words of a man who'd already broken his promise to them just minutes earlier.

More like this
Nancy Pelosi took a stand on the Jan. 6 committee, and it left Republicans whiny as hell
By Rafi Schwartz
The first insurrection felony sentence is here, and nobody's happy about it
By Rafi Schwartz
Guess how much Trump's companies made during his presidency!
By Rafi Schwartz
Stay up to date