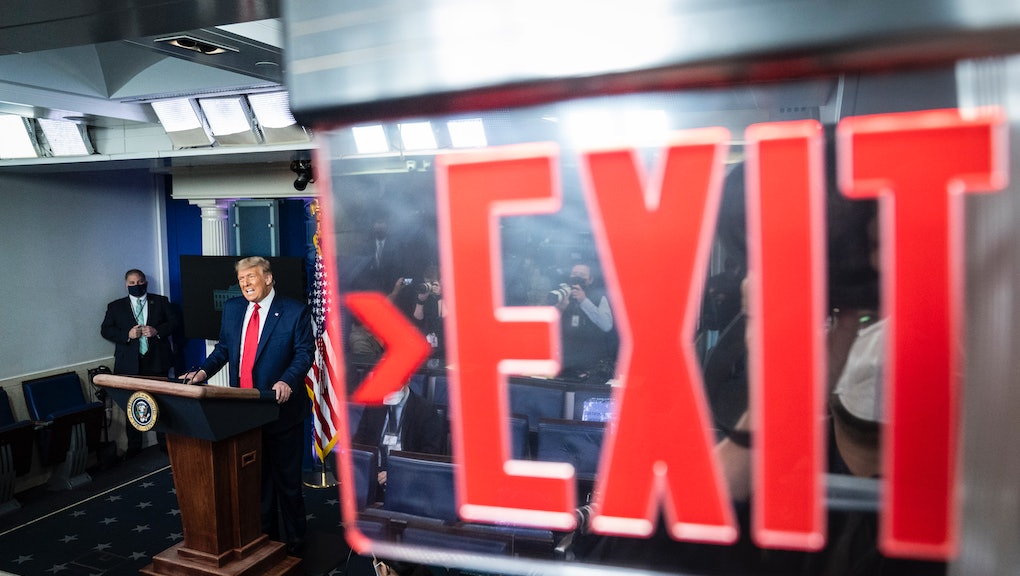 Despite his increasingly deranged protestations to the contrary, President Trump has just weeks to go before he is ignominiously booted from the White House, and is forced — once again — to live life as a commoner (albeit one with immeasurable wealth and privilege). And with that deadline looming, he seems more and more committed to bringing as much of the federal government down around him as possible on his way out the door.

Of late, that self-destructive energy has been focused both at, and on, Twitter, where the president has spent the past few days threatening to veto the pending National Defense Authorization Act — the legislation that sets the budget for the whole of the Defense Department. But just why is Trump threatening to nuke America's entire military? Because this year's NDAA doesn't include a provision retooling the nearly 25-year-old "Section 230" of the Communications Decency Act, a handy piece of legislation that effectively shields social media companies from lawsuits over the content they host.

"But what does that have to do with the Defense Department's budget?" you might ask. Great question! Basically, nothing. While Trump has complained that Section 230 is a matter of both national security and election integrity, it's just as likely the president's newfound interest in internet freedoms stems from his myopic belief that Twitter is real life, and that as president, he should have free reign to dictate that digital reality to his whims. Anything less, per Trump, is literally a federal case.

Which is why, on Friday, the president responded to a rare instance of a Republican lawmaker not kowtowing to his demands with a promise to veto Oklahoma Sen. Jim Inhofe's proposed NDAA legislation — which pointedly does not include anything having to do with whether or not Trump can say dumb things on Twitter. Inhofe is the chairman of the Senate Armed Services Committee.

Of course, being a complex, multifaceted individual with a variety of personal gripes and obvious character flaws, the president's problems with the NDAA extend beyond his personal capacity to do bad tweets; He's also very mad that the budget has section making the U.S. military marginally less racist.

In a statement released earlier this year while the bill was being debated in the House, the administration claimed it "strongly objects to Section 2829 of the bill, which would require renaming of any military installation or defense property named after any person who served in the political or military leadership of any armed rebellion against the United States."

You see, the president is furious over the obviously good proposal to wipe the names of people who rebelled against the United States over their ability to own other human beings as property from the country's military instillations. On Twitter, he lumped the effort into a broader movement for historical accountability, calling it a "desecration" that "is not what our country wants!"

In its statement from this summer, the White House went even further, saying the renaming of bases bearing Confederate honorifics was part of a larger conspiracy to "rewrite history and to displace the enduring legacy of the American Revolution with a new left-wing cultural revolution."

And so, here we are. With just weeks left to go before he turns back into a pumpkin, Donald Trump is publicly threatening to nix a $740 billion dollar measure that's already passed the House with a veto-proof majority, and which includes — among other things — a pay increase for people serving in the military. All so he can yell more on Twitter, and keep the names of racists on various federal buildings for just a little while longer.

Glad to see his remaining presidential priorities are in order.