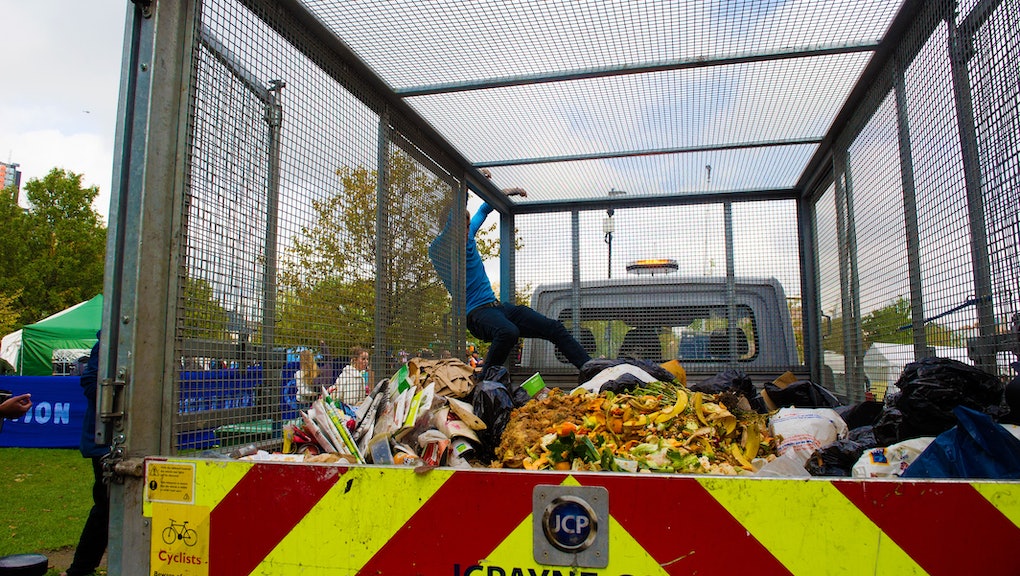 As much as 40 percent of all food produced in the United States goes to waste. That amounts to more than 133 billion pounds of food — an amount that the Department of Agriculture has illustrated by stating it could fill the 110-story tall Willis Tower in Chicago more than 44 times over. Instead of simply allowing that food to erode in a landfill, though, farmers are starting to harness the discards and turning food waste into a source of renewable energy, according to NPR.

According to the report, dairy farmers in Massachusetts have teamed with Whole Foods to take on some of the grocery chain's waste — particularly the byproducts of prepared food that is sold in the stores. All of that waste, along with other food that goes unsold, is tossed into an industrial-strength grinder installed at the Whole Foods facility. It eats up everything thrown at it and spits out a liquefied version of the waste, which can be fed into an anaerobic digester operated by farms across the state. The digester cooks up all of the waste, along with manure from cows, and captures methane gas that releases from the mixture as it is heated to 105 degrees Fahrenheit within the machine. That methane is captured in a giant bubble-like dome, which can then be sucked into an engine that runs off the gas.

This process is a potential game changer for a number of reasons. First and foremost, it provides a useful outlet for our growing food waste problem, which isn't just careless but also harmful to the environment. Typically, food waste builds up in landfills and begins to erode — emitting methane gas in the process. Methane has less staying power than carbon dioxide so it sticks in the environment for a shorter period of time but it is much more potent in the short term because of its ability to absorb heat, making it one of the more dangerous greenhouse gases. According to the United Nations' Intergovernmental Panel on Climate Change (IPCC), food waste accounts for as much as 10 percent of all human-produced greenhouse gas emissions. On top of that, there is the waste of all the effort required to produce the food that then goes unused. There are environmental costs associated with growing, harvesting, packaging, and transporting food, all for a significant chunk of it to end up in a landfill. The World Wildlife Fund estimates that if we eliminated all food waste — a lofty, likely impossible goal, but one to aim for nonetheless — we would eliminate as much as 37 million cars' worth of greenhouse gas emissions.

This process also cuts down on the reliance on traditional fuel sources for farmers. The US Department of Agriculture estimates that farming contributes about 10 percent of the country's greenhouse gas emissions. By turning food waste into a renewable energy source, farms can cut into some of the greenhouse gas production that they contribute to. It also gives those farmers the potential to help make more than just their farm more environmentally friendly. In the case of the farms highlighted by NPR, they turn about 100 tons of food waste per day into one megawatt of electricity — considerably more than the farm could consume on its own. According to the report, the farms use about 10 percent of the energy produced by the food waste mixture and sends the rest to an grid, providing enough electricity to power about 1,500 homes. That gives the farms a new source of potential revenue at a time where they need it most. More than 2,700 dairy farms went out of business in 2018, making it one of the worst years on record for the farms. Not a single state in the country saw an increase in these farms last year, and those that are still in operation are seeking new ways to make money. Providing renewable energy could be a solution to that problem.

There's little reason that this process can't take hold across the U.S. Whole Foods is far from the only grocery store that has waste that it needs to rid itself of — supermarkets are estimated to be responsible for as much as 43 billion pounds of food waste each year, according to a study by the National Resources Defense Fund, and most of them are performing poorly when it comes to utilizing that waste. A study conducted by the Center for Biological Diversity that graded major grocery store chains on how effectively they handle waste found that no company is engaged in ideal practices for handling food waste — including things like donating and composting food that is marked to be disposed of — and most are performing inadequately, receiving a D grade or lower. However, in order to get stores to participate in these types of food waste cycles that convert the discarded goods into energy, it may take a little prodding. In Massachusetts, where NPR focused its report, the adoption of anaerobic digesters was spurred in part by a law that prohibits businesses from simply disposing of organic waste. That law incentivizes programs like the one that Whole Foods is utilizing to turn its waste into energy.

If the U.S. is looking for a model for how it can make use of its food waste, Europe may serve as a worthwhile model. Anaerobic digesters have taken hold across a number of countries within the continent and have been in use for well over a decade in some places. Those programs have largely been successful — the Netherlands expects these digesters to be an important tool to push the country toward its goal of generating 14 percent of its energy from renewable resources and Italy expects to generate more than 300 megawatts of electricity from anaerobic digestion by 2024. Food waste is inevitable, as is the need for agriculture. But with the right tools, those things do not need to be harmful to the environment — instead, they can become a source to help shift us off our reliance on fossil fuels.

More like this
The U.S. is spending millions to develop a nuke-powered spaceship
By AJ Dellinger
Elon Musk's Neuralink made a device that lets a monkey play Pong with his thoughts
By AJ Dellinger
Google Earth's new Timelapse feature is a rude awakening for climate skeptics
By AJ Dellinger
Stay up to date