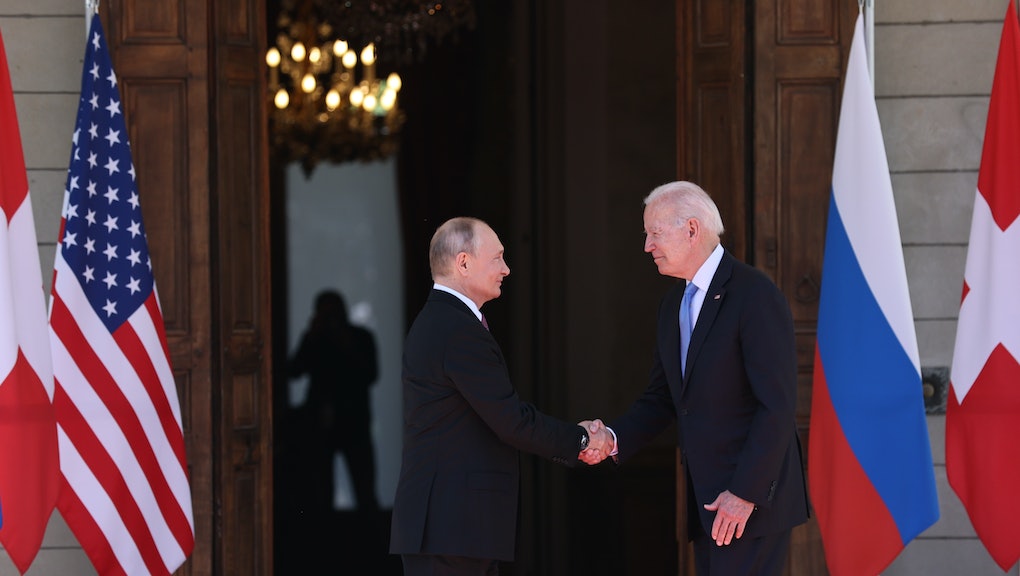 Whenever a United States president meets with the leader of Russia, there's always a lot of extremely stupid pomp and circumstance and hand-wringing and tea leaf-reading involved. These are, after all, two global superpowers whose adversarial jockeying has helped define the past century. A meeting of these two heads of state is not an insignificant event, and yet for some reason, pundits can't help but fixate on the most insignificant aspects of them; conservatives love to cite Ronald Reagan's refusal to wear a coat as the catalyst for ending the Cold War. Donald Trump's 2018 joint press conference with Vladimir Putin in Helsinki was, well, it sure was something.

And so, as President Biden and perpetual Russian leader Putin meet for the first time in Biden's presidency, it's understandable that the professional pundit class of cable news talking heads would be looking for something, anything, with which to fill precious airtime with the sound of their own voices. After all, this all has to mean something, right? Right? RIGHT??

"This," as the network infamously intoned, "is CNN":

"We did see a handshake, a pretty significant handshake from these two leaders," anchor Wolf Blitzer declared.

"Many countries across the world will be looking to see what happens today, whether anything can be taken out of it and turned into something more productive," prognosticated Clarissa Ward, CNN's chief international correspondent.

"You know, these moments are about moments," CNN Chief National Security Correspondent Jim Sciutto stressed. "I'll tell you one moment I noticed there in the Biden-Putin interaction: The handshake. Biden looked Putin in the eye with a smile. Putin looked away. Again, you don't want to read too much or too little, but again, these are about public posturing, it's about how you project strength, and that was a notable moment to me."

Does any of this mean anything? Of course not! Two guys shook hands. Maybe one tried to squeeze a little harder or out macho the other. Does this mean the Russians are gonna move their nuclear missiles into ready position? Has Joe Biden singlehandedly ended the war between Ukraine and Russian-backed separatists? No! It's the same sort of alpha machismo nonsense that happens when two dads try to pick up the check at dinner. This is not news!

A significant handshake? A moment about moments? Please smash me in the head with Wolf Blitzer's Peabody award until I am simply dead.

Look, I get it. Sometimes it's a slow news day, and you've gotta put lipstick on a pig to make it look like you're actually doing work. I'm a blogger, I know this better than just about anyone! But the key to stretching a Story into Content is to be upfront and honest about the fact that this is all just filler. Otherwise you end up saying with a totally straight face that a half-second handshake is "pretty significant" and hope that no one laughs out loud.