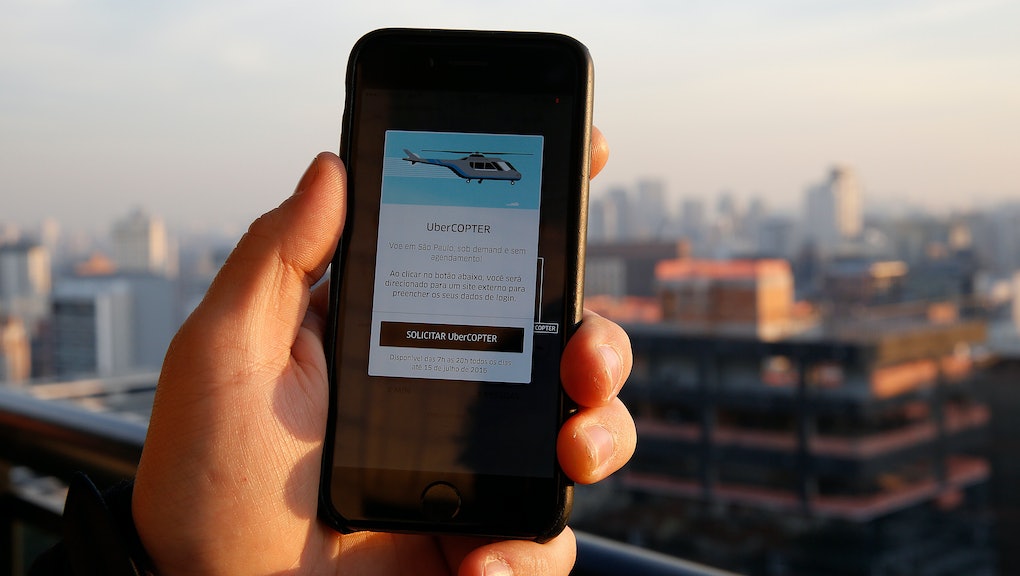 If you're an Uber power-user located in New York City, your ride options have just upgraded in a big way. Beginning July 9, Platinum and Diamond members of Uber's reward program, Uber Rewards, will be able to request Uber's new helicopter service to go from Lower Manhattan to John F. Kennedy International Airport. Called the Uber Copter, this service turns a typically one-hour drive (that can stretch infinitely longer depending on traffic) into an eight-minute flight.

According to the New York Times, after taking preparations and ground transportation into consideration, the Uber Copter should take about 30 minutes to go from Lower Manhattan to JFK. Every helicopter can carry five passengers, and the limited space means passengers are allowed to bring only one personal bag and one carry-on weighing no more than 40 pounds. In true Uber fashion, a helicopter can be booked in advance or right away.

Payment for the Uber Copter is also similar to the way the regular Uber service works. The cost of each ride will be dynamic and dependent on how much demand exists at the time. Estimates for the average cost of an Uber Copter flight range from $200 to $225, noted an Uber representative to the New York Times. This high price makes the Uber Copter a service more tailored towards business executives and frequent travelers (which presumably make up many of the Platinum and Diamond members) looking to avoid rush hour traffic.

On Wednesday, the New York Times caught up with Steve Wooster, the managing director for services and air operations for Virtuoso, for a comment on the cost. He considered the Uber Copter considerably affordable for the amount of time it saves.

"In rush hour, an Uber Black car could cost up to $200 to J.F.K.," he pointed out, "so these helicopters are competitively priced."

TechCrunch used an Uber fare estimator to find the average cost for the same distance landing somewhere between $70 to $90 or more depending on demand. For people who travel that distance often while facing unpredictably long times stuck in traffic by car, the higher price could be worth the cost.

"This is a trip that so many travelers make a day, and we see an opportunity to save them a huge amount of time on it," said Eric Allison, the head of Uber Elevate, to the New York Times.

Critics on Twitter have chastised the service as another means for the wealthy to freely spend their money on something the average person won't be able to access. Other users — either riders who have tried Uber Copter at other special events or riders who frequently travel to and from JFK — have praised the helicopter's consistently short travel times and low pressure service.

In a statement to Engadget, Allison implied the Uber Copter is only the beginning, calling it a way for the company to gain "insight and real-world experience as we continue to lay the foundation for Uber Air."

Uber has previously used its flight services mainly during special events in other locations, such as the Cannes Film Festival, but has not offered a regular service like this in the U.S. until now. After Uber Copter's July launch in New York City, the company appears to be planning to explore more flight services to other traffic-congested cities.