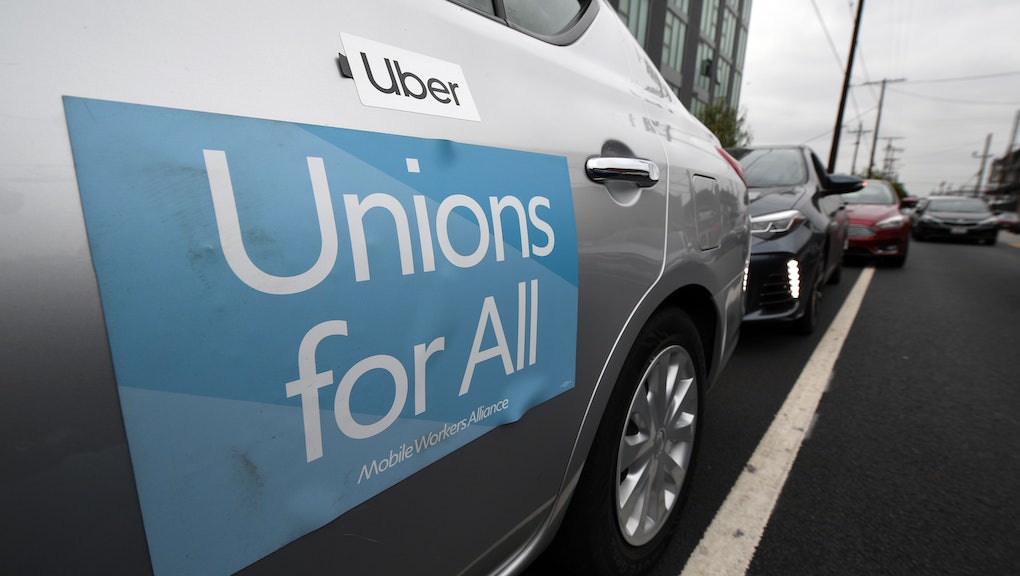 Uber suggests drivers should have insurance or vacation, but not both

Uber has for years pushed back against the idea that its drivers are employees of the company, touting the promise of "flexibility" and "control" over providing protections and benefits. Now company CEO Dara Khosrowshahi believes that gig economy workers deserve "the best of both worlds," as long as the government helps provide the benefits. In a New York Times op-ed published Monday, Khosrowshahi called upon legislators to establish new laws that would require companies like Uber to contribute to "benefits funds" that would pay out to workers so they would have the ability to take paid time off or cover the cost of a health insurance plan.

Uber flanked its CEO's call to "do better" by its workers with an accompanying blog post and a 17-page proposal that laid out the company's vision for what it called a "new model for independent platform work." Under the proposal, Uber and state governments would set aside money in funds that drivers could draw from to cover paid time off and insurance plans, or serve as contributions to health savings accounts or retirement accounts. Under Uber's proposal, drivers would earn the ability to draw from these funds after completing 100 trips, or earning $500 on the platform.

Uber is asking for states to require it and companies like it to establish these benefits funds, and claims that it would have contributed more than $655 million to the funds in 2019 had the law required it. Why the company couldn't just provide these types of benefit pools on its own is unclear. Uber did not respond to Mic’s request for comment.

In the proposal, Uber provided an example of how this might play out. According to the company, a driver in Colorado averaging more than 35 hours per week completing trips for the company could have accrued approximately $1,350 in benefits funds. By Uber's math, that would be enough to provide two weeks of paid time off (80 hours at about $16 per hour) or to cover the cost of a subsidized healthcare plan premium. Notably, it does not provide enough of a payout to provide both insurance coverage and paid time off, despite the fact that the driver in Uber's own example is working full-time hours for the company.

There is a law that would require Uber to provide complete benefits and protections to its employees rather than simply setting aside cash for drivers. California's Assembly Bill 5 (AB5), passed last year, requires gig economy companies to treat workers as employees instead of contractors, extending to them fundamental labor rights including a minimum wage and benefits like paid time off and health insurance. Uber has tried to avoid this law, first by spending millions of dollars to lobby against it and then by claiming that drivers are not a core part of its business so the law doesn't apply to its operations. The company has refused to comply with the law, done everything in its power to skirt enforcement, and is backing a ballot initiative that would allow voters to overturn it this November.

According to Harry Campbell, founder of The Rideshare Guy, complying with AB5 would cost Uber an extra 30 percent of its current expenses to extend legal requirements like minimum wage, workers compensation, health insurance, and collective bargaining. "This proposal is way shy of the benefits afforded to employees," Campbell tells Mic, noting that the benefit fund would, by contrast, "only amount to around 5 percent of a driver's yearly earnings." He says that there is likely room for negotiation and ultimately a compromise between California's law and Uber's plan, but "this proposal seems one-sided very much in Uber's favor still." Campell says he would like to see the fund provide closer to 10 percent of a driver's yearly earnings, along with assurances that the company won't simply lower rates and pay less to offset the additional cost of the benefits fund.

Uber's proposal for these benefit pools comes in the middle of the global coronavirus pandemic, and Khosrowshahi evoked that crisis as one of the reasons that Uber is pursuing this expanded safety net for its workers. But this is not the first time that Uber has pushed for the concept of "worker-determined benefits." The company, along with Lyft, proposed something similar last year as an alternative to California's AB5.

Marshall Steinbaum, Assistant Professor of Economics at the University of Utah, tells Mic that what Uber is seeking to do with its latest public lobbying attempt is to get legal protection for the way that the company currently operates, which occupies a gray area between traditional employee status and independent contractor. "There used to be a sharp boundary between employment and independent contractor. Now there's this big hazy area, which is exactly the thing that the CEO of Uber would like to have enshrined and protect them from the law through this proposal," he says.

Steinbaum notes that Uber and its fellow gig economy companies have never paid premiums for workers so that they can receive unemployment insurance should they lose their jobs. The government effectively gave these companies a free pass on that with the introduction of the CARES Act, which created the Pandemic Unemployment Assistance (PUA) program that allows contractors and gig workers to receive unemployment insurance despite the fact that the companies never paid into those systems. "That already was a gigantic bailout of the gig economy," Steinbaum says. Now that the government's protections for those workers have expired, Uber is seeking what Steinbaum calls a "less generous version of PUA." Instead of the government solely making the contributions, Uber will join in, but drivers will get considerably less out.

"It's not nearly as good of a deal for drivers as traditional social insurance is," Steinbaum says. "That's the bottom line. This is basically Uber's attempt to buy their way out of following the law, particularly AB5 in California where they are at their most great risk of being forced into employment classification for drivers and for their workers." It seems Uber is still invested in spending money fighting laws in the interest of its workers rather than simply providing to its workers what those laws require.Uber wants to create 'benefit funds' for drivers instead of just giving them benefits