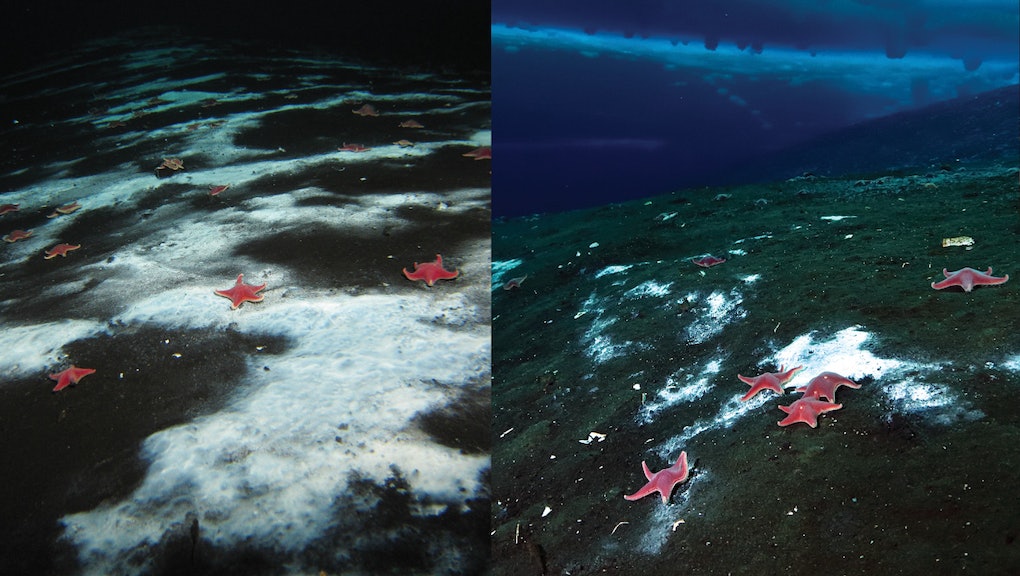 Andrew Thurber et al./Proceedings of the Royal Society B

Researchers have discovered an active methane leak on the Antarctic sea floor for the first time, a disturbing finding that could mean atmosphere-damaging gasses are being released into the sky. The discovery was published on July 22 in the Proceedings of the Royal Society B and stands to broaden scientists' understanding of Antarctica's methane cycle, which we know very little about.

Scientists believe there's a lot of methane gas trapped beneath the Antarctic sea floor and inside areas with permafrost. They've been afraid that global warming could cause these places to melt, which would release an astounding amount of gas into the air. If this happened, it would be what experts call a 'tipping point' for Earth, meaning global warming would basically be unstoppable.

But that doesn't appear to be what's happening here.

"[The] ultimate source of this methane remains unknown," wrote the authors of the study. It doesn't appear to be a consequence of climate change, given that the area it was found, near the Ross Sea, has kept a relatively steady temperature.

"That is a mystery that we still do not have an answer to," team lead Andrew Thurber told The Guardian. "It is on the side of an active volcano but it doesn’t seem like it came from that."

The research team hypothesized that the methane comes from decaying ice algae that produced enough gas to create this leak. But it's hard to tell, exactly, because it's difficult to study the Antarctic sea floor; the report also noted that dangerous ice conditions made it unsafe to make observations, "so the full extent of [the leak] remains unknown."

Usually, that would call for more trips during different times to study the area when conditions are less hazardous. But the pandemic has, once again, thrown a wrench in the research team's plans.

While the team doesn't know where the leak is coming from or why it suddenly decided to form, they've already learned a little more about a different part of the methane cycle that’s often overlooked — microbes.

Microbes are supposed to swoop in and consume the methane gas before it can rise into the atmosphere. But the researchers only found a small number of microbes of an unexpected strain that can't eat up the methane fast enough to keep it from escaping the ocean.

"We're probably in a successional stage, where it may be five to 10 years before a community [of microbes] becomes fully adapted and starts consuming methane," said Thurber to The Guardian. But, in the meantime, that could mean the gas will move into the skies, where it can contribute to the acceleration of climate change.

"The methane cycle is absolutely something that we as a society need to be concerned about," added Thurber. "I find it incredibly concerning."