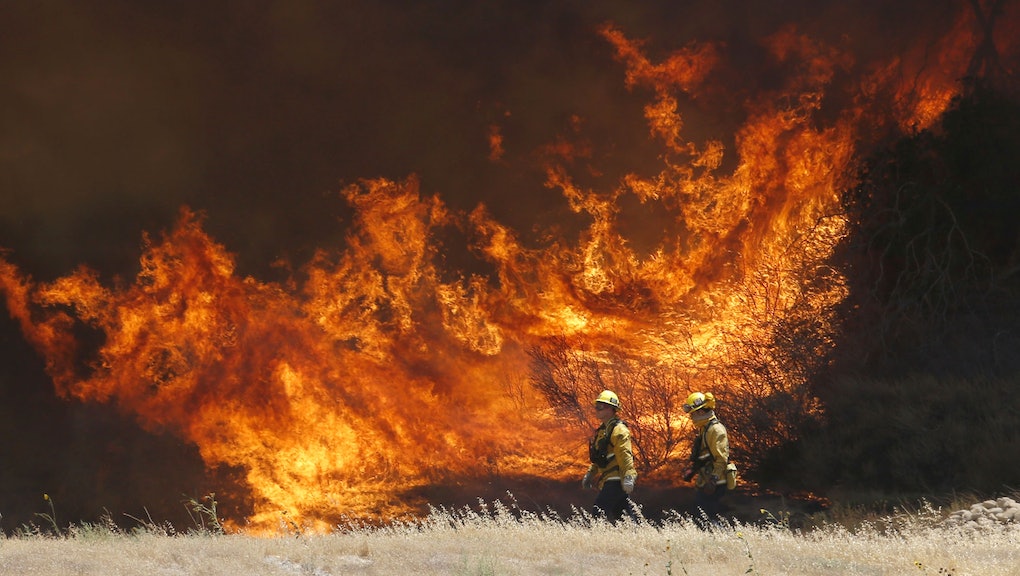 Within as little as 20 years, regions in the United States could be looking at a life-altering increase of days with extreme heat due to human-accelerated climate change. By the 'point of no return,' which researchers have previously considered to be the year 2050, places like New York could see up to 51 more dangerously hot days per year. In southern areas, such as Houston, that number increases to 158. Detailed in a report written by the Union of Concerned Scientists (UCS) — as well as an accompanying peer-reviewed study published in Environmental Research Communications — the findings are a first of their kind to take a closer look at how temperatures will rise in all 3,109 counties within the U.S. The authors estimate that over 250 cities in the U.S. will end up dealing with about a month or more, per year, of days going over 100 degrees Fahrenheit.

And that's not even a worst-case scenario. The actual amount of extremely hot days could be greater than initially assumed. Kristina Dahl, senior climate scientist and co-author of the report, pointed out to National Geographic that the numbers were a "conservative estimate for cities because heat added by urban heat island effects isn’t represented in the report."

Dahl is talking about how large cities can feel even hotter due to the greater number of places covered in concrete, pavement, and asphalt. According to the National Oceanic and Atmospheric Association (NOAA), these materials tend to absorb and radiate heat, creating 'heat islands' that can increase temperatures by 10 to 20 degrees more than the average temperature.

This means that, for states like New York or Texas, the higher temperatures from climate change could result in urban residents facing down even hotter days in addition to a greater number of days.

The higher temperatures mean more than just getting sweaty from the heat. In a UCS press release, senior climate scientist and co-author of the report, Rachel Licker, warned that it could change everyday lives nationwide and possibly drive human migration.

"By late century, [residents] may have to significantly alter ways of life to deal with the equivalent of up to five months a year with a heat index above — often way above — 105 degrees," Licker said. "We don’t know what people would be able and willing to endure, but such heat could certainly drive large-scale relocation of residents toward cooler regions."

Those cooler regions may be difficult to find, according to the UCS's interactive mapping tool. The map shows nearly every region increasing in temperature by 2050. Even northeastern states won't be spared by the changes. The UCS report forecasted a number of climate change effects on New York, in particular, predicting that:

Southern states that frequently see hot temperatures, such as Arizona, will only get hotter. The authors' analysis predicted that Arizona might experience multiple days of 'off-the-charts' temperatures — over 127 degrees Fahrenheit — that go far beyond what the human body can handle. By the end of the century, Arizona could be dealing with 119 days of temperatures over 90 degrees.

Climate change and the increase in temperature spells trouble for the everyday citizen. Not only are people already seeing consequences in the form of extreme storms and 500 percent larger wildfires, but workers could find themselves hard-pressed to find safe working days.

“By the end of the century, on most days between April and October, construction workers in parts of Florida won’t be able to safely work outside during the day because the heat index would exceed 100 degrees,” explained Dahl. “Likewise, agricultural centers ... could struggle to keep farm workers safe, with the heat index exceeding 90 degrees and 100 degrees ... for the equivalent of about three months a year. If farm workers are unable to work as a result of extreme heat, this could affect the productivity of farming enterprises.”

Juan Declet-Barreto, UCS climate scientist and report co-author, also cautioned about the impact on "[l]ow-income communities, communities of color and other vulnerable populations." Social and financial inequalities could prevent these residents from accessing cooling centers, healthcare, and air conditioning that could keep them safe from the extreme heat.

The report urges citizens and government agencies to act immediately to stem the effects of climate change. The authors explain that, if "the goal of the Paris Agreement is met and future global average warming is limited to 2 degrees Celsius," the U.S. could cut down the number of hot days by half.

Governors and state legislators can continue to encourage clean energy and enact climate policies — "including renewable energy standards, climate resilient infrastructure and innovation incentives" — that could prevent the rapid rate of global heating.

"Economists have also advised putting a price on carbon emissions," recommended the report, "to properly account for damages from the fossil-fuel-based economy and signal intentions to protect the environment."

The report suggested that cities and local governments should also be prepared to:

Climate change and rising temperatures isn't an event that will only affect kids worried about the environment, and it isn't something that will happen long into the future. Further research has found that it's happening now. It's affecting people — adults, children, elderly, and even the family dog — right now.

"We have no time to waste to prevent an unrecognizably hot future from becoming reality," insisted the UCS. "We must act now to address the climate crisis."

More like this
What cities will be most affected by climate change?
By Vanessa Taylor
The ocean is about to swallow a climate research facility, which feels fitting
By AJ Dellinger
"Brood X," a plague-level cicada infestation, is coming for us this spring
By Rafi Schwartz
Stay up to date