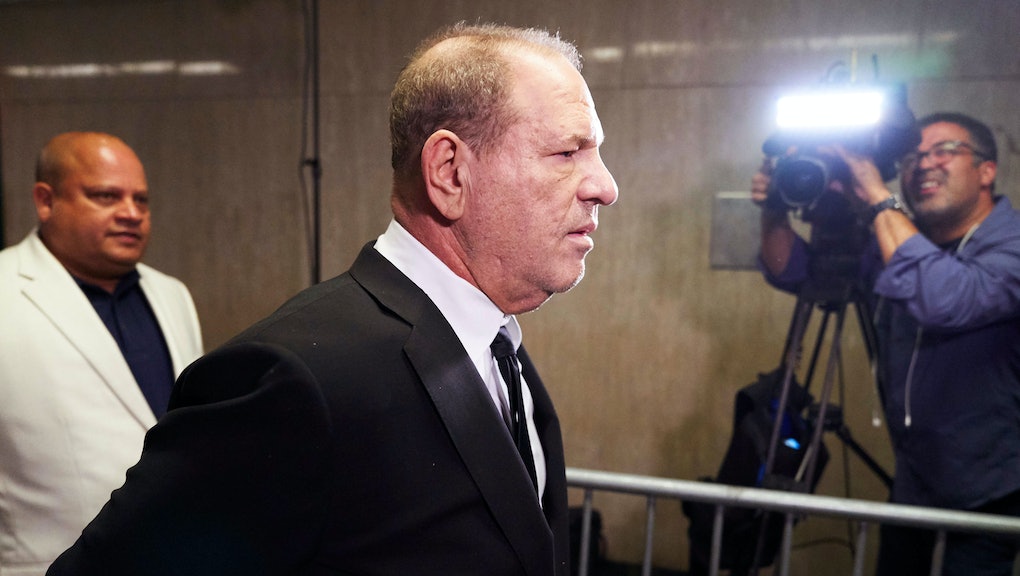 'Untouchable': Harvey Weinstein documentary shows how he avoided accountability for so long

It’s hard to keep your eyes glued to the screen for all 100 minutes of Untouchable, the Hulu documentary about the fall of Harvey Weinstein that premiered Monday. Director Ursula Macfarlane lets the camera linger on the faces of the movie mogul’s victims — women who could be your kindly aunt from upstate, or your bright-eyed cousin from Canada, or an actress from your favorite primetime TV crime drama.

They’re practical in their accounts of the times Weinstein raped or sexually assaulted them. A few women repeat each other verbatim as they recount the bargains they made in their heads as he forced them into submission. “I don’t know how to explain it. I just thought, if I shut up, it’ll be over in a few minutes,” Hope D’Amore, one of Weinstein’s earliest known rape victims says towards the end of a single, agonizing three-minute close-up.

As difficult as Untouchable is to watch, it’s required viewing for anyone who’s paid attention to the Weinstein case, the rise of #TimesUp, and the heightened exposure of #MeToo. When the news broke and dozens of women came forward with allegations of serial sexual predation against Weinstein in October 2017, the public read the exposés by Ronan Farrow in the New Yorker and Jodi Kantor and Megan Twohey in the New York Times in rapt horror. With Weinstein’s case delayed until January — he had faced a September 9 trial date — Untouchable offers visibility into both the formative years of a very bad man and the faces of the victims he tried to silence.

After the stories were published, a lot of people blamed the assistants who’d allegedly set up clandestine meetings for Weinstein with women he coerced into massages and sex. Perhaps there were evil enablers waiting in the wings at Miramax and The Weinstein Company, but we don’t see them in Untouchable. Most of the former employees who go on camera to recount the boss’ crimes quit after finding out about the sexual assault accusations against him.

Yet as the Jeffrey Epstein case exemplifies, there’s seemingly no shortage of people willing to facilitate a powerful man’s desires. Or who, at the very least, were willing to overlook bad behavior for personal advancement. But a few former Weinstein employees, who knew about his transgressions and stuck around anyway, express a lot of shame and remorse for it in the film.

The point of Untouchable, of course, is to document how difficult it was to pin Weinstein down, despite accusations of rape dating back to his college days. On camera, New Yorker staff writer Ken Auletta describes trailing the movie mogul for a 2002 profile, learning about the allegations that Weinstein had assaulted an assistant, and being unable to include them in the story — because no sources would go on-the-record against the most powerful man in Hollywood. In 2017, Farrow consulted with Auletta as he built the story exposing Weinstein’s abuses. He had assault victims willing to speak out, but he was also being tailed by elite private intelligence officers, who were spying on the journalist and his sources.

Zelda Perkins, a former Weinstein assistant who appears in the documentary, says her boss would frequently parade around naked and make unwanted sexual advances towards her. It was a constant struggle to rebuff him, but she was always successful. When a colleague wasn’t so lucky, Perkins was horrified and promptly quit. But when it seemed apparent she and the victim could wield a powerful case against Weinstein, the businessman’s legal team did everything in their power to silence them. The women signed a terrifyingly restrictive NDA in exchange for a monetary settlement. “At this point, I was trying to work out how to make this okay,” Perkins says. When Auletta approached her, years later, to go on-the-record for his Weinstein profile, she regretfully refused. “We had guns pointed us at every direction,” she says.

In 2001, when Rebecca Traister was a cultural reporter at the New York Observer, she went to a party looking to ask Weinstein about a controversial recent film, an update on Othello. He wound up calling her a “fucking cunt” in front of a room full of industry people and journalists, then putting another reporter, Traister’s then-boyfriend Andrew Goldman, in a headlock on a Manhattan sidewalk. It’s the sort of incident that should’ve gone viral had Twitter been a thing.

Traister says in Untouchable that she was shocked it didn’t make front-page tabloid news. But the whole volcanic outburst was confoundingly shushed-up by the Weinstein machine.

As Jia Tolentino writes in her essay “The I in Internet,” “In the turbulence that followed the Harvey Weinstein revelations, women’s speech swayed public opinion and led directly to change. People with power were forced to reckon with their ethics; harassers and abusers were pushed out of their jobs.”

It’s true, the digital era has ushered in a wave of transparency. The voices amplified by the internet have succeeded in scraping away a crust of monstrous offenders. But, as Tolentino and Untouchable each point out, a lot more work is needed to enact meaningful change. Modern society is set up to enable power-hungry people like Weinstein, who feel entitled to their every desire. It’ll take IRL action to really root out the rot at the core of our institutions.

“People wrote about women ‘speaking out’ with prayerful reverence, as if speech itself could bring women freedom,” Tolentino writes. “As if better policies and economic redistribution and true investment from men weren’t necessary, too.”