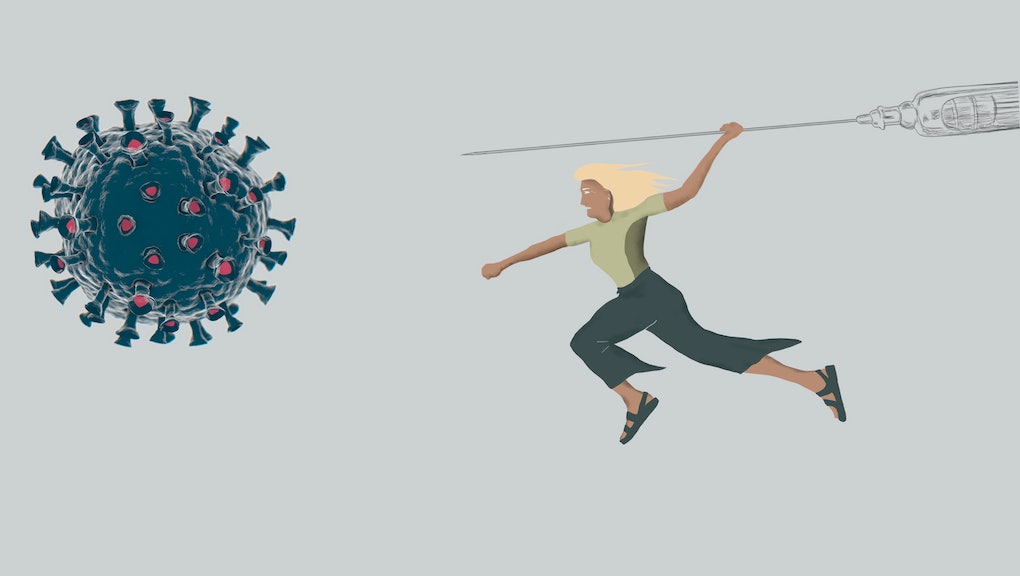 Vaccinated COVID-19 survivors may be immune for life, according to new research

Amid warnings about new, concerning coronavirus variants, two studies offer a glimmer of hope for a change. They suggest that immunity to COVID-19 lasts at least a year in survivors and even their whole lives if they also get vaccinated, the New York Times reported — which, in turn, would mean that they may not need booster shots. The newspaper also noted that people who’ve been jabbed but never caught COVID-19, along with the few previously infected people who didn’t mount a strong enough immune response, will probably still need boosters.

In both studies, researchers examined people who had contracted COVID-19 roughly a year prior, according to the Times. The first study, published in Nature on Monday, found that B cells that “remember” the virus hang out in the bone marrow, potentially releasing antibodies as necessary. The second, which is being reviewed for publication in the same journal, concluded that these memory B cells mature and enhance their response for at least a year after infection.

In the first study, researchers looked at blood from 77 COVID-19 survivors — most of whom had mild symptoms — every three months, the Times explained, beginning roughly a month post-infection. While their antibody levels fell, their memory B cells laid dormant in the bone marrow, prepared to mount an attack in the event of exposure to the virus.

Per the Times, researchers detected memory B cells in bone marrow samples from 15 out of 19 participants around seven months post-infection. The fact that they didn’t observe these cells in four of the participants implies that “even if you got infected, it doesn’t mean that you have a super immune response,” Ali Ellebedy of Washington University in St. Louis, who led the study, told the newspaper. Put another way: Even if you survived COVID-19, you still need the vaccine for backup.

Among the five participants who donated bone marrow samples, Ellebedy and colleagues found that memory B cell levels remained steady 12 months after infection, the Times said, suggesting that these cells can persist in the bone marrow for a while.

In the second study, researchers looked at blood samples from 63 people who’d recovered from COVID-19 around a year beforehand, most of whom also had mild symptoms, the newspaper explained. Twenty-six had gotten at least one dose of Pfizer or Moderna. As their memory B cells matured, the antibodies they pumped out “learned” to neutralize a wider swath of SARS-CoV-2 variants.

In unvaccinated participants, this neutralizing activity — essential in preventing infection — had waned against all viral variants, especially the one initially detected in South Africa, the Times noted, countering Senator Rand Paul's rationale for not getting vaccinated. (The newspaper reported that he'd tested positive for COVID last March, which led him to believe he was fully immune.) But the jab enhanced this neutralizing ability roughly 50-fold in vaccinated participants, pointing to the possibility that vaxxed COVID-19 survivors are well-protected against even emerging variants.

For people fortunate enough to never have gotten sick with COVID-19, it’s probably a different story, the Times explained, since they’re responding to a single viral protein as opposed to a full, live virus. Plus, the immune response of those who recovered from COVID-19 had already matured before the vaccine re-exposed it to the viral protein, rendering it even more robust.

The take-home message: Get vaccinated if you haven’t already. A vaccine will still protect you even if you haven’t already gotten COVID-19, but you may need a booster. And if you have recovered from the disease, vaccination may give your natural immunity an added boost. Last but not least, as the Times pointed out, you can’t count on your natural immunity from getting sick with coronavirus to protect you indefinitely. (That includes you, Rand Paul.)

More like this
This anti-vaxx doctor is seriously telling lawmakers vaccinated people are "magnetized"
By Tracey Anne Duncan
These adorable COVID-sniffing dogs are pandemic heroes — but there’s a catch
By Tracey Anne Duncan
Why the origin of coronavirus is still a mystery
By Marilyn J. Roossinck
Stay up to date