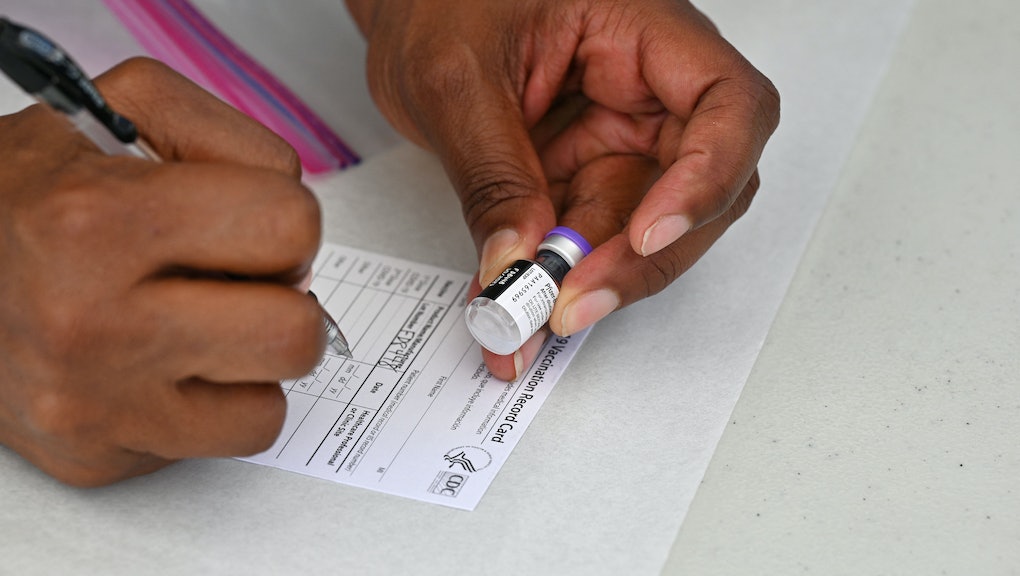 Vaccination rates are up — but will it even make a difference now?

If any good news has come from the Delta variant rearing its ugly head, it’s that it might’ve been just the wake-up call some people needed to get the shot. Since last month, the average rate of first COVID-19 vaccine doses given in the U.S. has nearly doubled, CBS News reported. The outlet attributed the jump to the current swell in cases, which occurs as kids across the country prepare to head back to school. But while it might seem like the glimmer of hope all of us could use right now, will it really make a difference — or is it too little, too late?

First, a quick rundown of the numbers and what could be driving them: Citing CDC data, CBS News explained that the U.S. was administering an average of 441,198 first doses a day as of August 5, compared to an average of just 226,209 on July 5, a 95% boost.

States with low vaccination rates, where COVID is responsible for a torrent of hospitalizations and deaths, have seen some of the biggest gains, according to the network. The average rate of new vaccinations in Alabama – which has one of the lowest vax rates in the country — has gone up more than 100%, based on July 22 CDC data. Louisiana had the second-highest increase, CBS News said, followed by Nebraska and Minnesota.

Over the last two weeks, 25- to 39-year-olds accounted for most of the first doses, the outlet reported, adding that a broadening move toward requiring employees to get vaccinated might be playing a role. But CBS News said that the steepest rise has been among kids. As of August 11, 43% of 12- to 15-year-olds have received at least one dose, per the CDC. Children under 12 are still ineligible for the vaccine.

Even if kids don’t typically come down with severe COVID, CBS News explained, Delta might’ve changed the equation: A record number of them are showing up at hospitals with COVID. In a press briefing on Tuesday, President Biden said that unvaccinated adults bore responsibility for spreading COVID to kids. “The reason children are becoming infected is because, in most cases, they live in low-vaccination-rate states and communities, and they're getting it from unvaccinated adults,” he said.

Experts say the trend is worth celebrating, but more shots in and of themselves won’t be enough to turn the tide.

Clearly, our nation’s once-sluggish vaccination rates are picking back up. But does that mean we still have time to turn things around — and maybe even brace ourselves for a Hot Vax Autumn to make up for our Lukewarm Summer? Experts say the trend is worth celebrating, but more shots in and of themselves won’t be enough to turn the tide.

Dan Shirley, an infectious disease physician at UW Health in Madison, Wisconsin, sees the uptick as “encouraging” and vaccinations as “the best tool that we have to change the direction of the current rise in cases and move towards ending the pandemic.” At the same time, “it is also crucial to remember that we have other tools to help prevent transmission while more people become fully vaccinated.” That includes masking when indoors or in groups, social distancing when possible, and staying home and getting tested if you’ve been exposed to someone with COVID or begin showing symptoms, Shirley says.

It’s also worth defining what “turning things around” would look like. “At this point, we may not completely eliminate SARS-CoV-2 from the world,” says Pablo Penaloza-MacMaster, an assistant professor of microbiology-immunology at Northwestern University, “but if more people continue to get vaccinated, this virus could become just like a common cold virus." He explains that it'd give people the sniffles, for example, without killing them or making them seriously ill.

On the other hand, Penaloza-MacMaster is “optimistic” that we can turn around the rate of severe disease and death if more people continue to get the shot, which he says is the most effective way to stop the virus from spreading and mutating. Every time the virus infects an unvaccinated person, it has a chance to mutate and evolve into potentially worrisome variants, he points out.

In a similar vein, Stanley Weiss, a professor of medicine and epidemiology at Rutgers New Jersey Medical School, sees the rise in vaccinations having limited benefit in what he describes as “a fertile breeding environment for new variants of this virus to emerge that have selective advantages.” At this point, he believes they’ll “slow, but not stop the spread” and “significantly diminish, but [not] eliminate” the risk of severe illness and death.

Weiss calls for fully vaccinating more people throughout the country and giving those with less robust immune responses to the shot an additional booster. (The good news is that the FDA is expected to authorize a third shot of the Pfizer and Moderna vaccines for immunocompromised people.) "He also advocates universal masking in order to curb the virus’s spread, as well as an evaluation and revision of HVAC systems in buildings. Indeed, the type of HVAC system can influence airborne spread of the virus, according to the EPA.

Don’t get me wrong — we need to find hope wherever we can, especially now. But equally important is seeing vaccination as only one of many tools that we need to change the trajectory of this pandemic.

More like this
How to save your skin from climate change
By Melissa Pandika
Could fresh air be the key to ending the pandemic?
By Melissa Pandika
Studies suggest that Pfizer is no longer the cooler vaccine
By Ian Kumamoto
Stay up to date