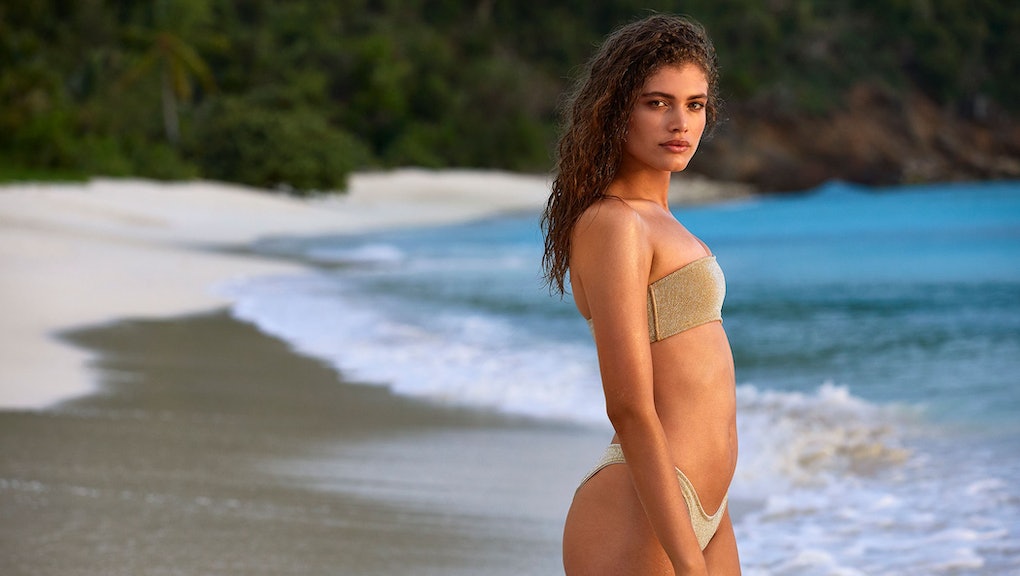 Trailblazing beauty Valentina Sampaio made history this week, becoming the first transgender model to appear in Sports Illustrated’s venerable swimsuit edition. The special issue of the magazine has catapulted the careers of supermodels like Heidi Klum, Tyra Banks, Ashley Graham, and Kate Upton in the 56 years since its inception. The 23-year-old, Brazillian-born Sampaio was announced on Friday as SI’s 2020 Rookie of the Year, accompanied by photos of her posing in a gold bandeau bikini and an asymmetrical one-piece on an idyllic-looking beach.

Sampaio penned an essay for Sports Illustrated, thanking the publication “for seeing and respecting me as I truly am. For understanding that more than anything, I am human.” She was born in a remote fishing village in northern Brazil. “Brazil is a beautiful country, but it also hosts the highest number of violent crimes and murders against the trans community in the world—three times that of the US,” Sampaio wrote.

“Being trans usually means facing closed doors to peoples’ hearts and minds. We face snickers, insults, fearful reactions and physical violations just for existing,” the model added. “I recognize that I am one of the fortunate ones, and my intention is to honor that as best I can.”

Sampaio has been a pioneering presence in the modeling world the last several years. In 2016, she was named a brand ambassador for L'Oréal. The following year, she was showered with international media attention when she appeared on the cover of Vogue Paris, becoming the first transgender cover star in the publication’s history, and later fronted Vogue Germany and Vogue Brasil, too. In August 2019, Sampaio became the first openly trans model to be hired by Victoria’s Secret.

Sports Illustrated’s longtime editor-in-chief, MJ Day, is the driving force behind the publication’s inclusive casting efforts. In 2016, she included Graham in the swimsuit edition as its first-ever plus-size model. Last year’s Rookie, Halima Aden, was the first model to wear a hijab and burkini in SI’s normally skimpy special feature. Also in 2019, Day hired Banks to return to the swimsuit edition to dazzle as its 46-year-old cover star.

Sampaio’s activism within the LGBTQ+ community initially put her on Day’s radar. “We are deeply moved that Valentina was willing to put her trust in us,” SI’s editor-in-chief said. “We didn’t think twice about wanting to amplify her voice and message and give her a platform to advocate on behalf of her personal aspirations and the trans community.”

Day added she selects models for their character more than their bodies. “Our goal in selecting who we feature is centered around identifying some of the most inspiring, interesting, and multidimensional women that we can find,” she added.