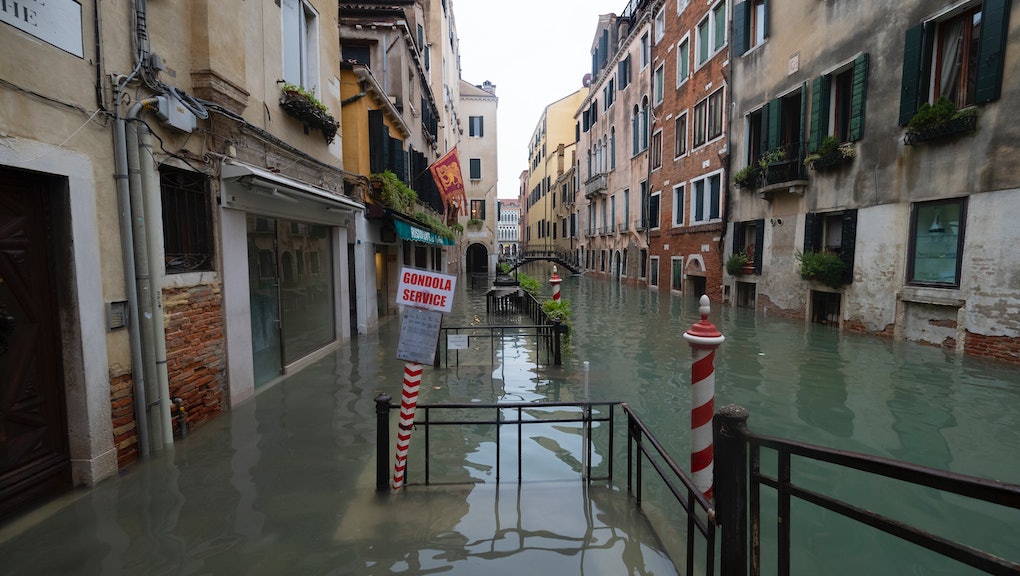 Venice, Italy floods at historic levels plunge the city into state of emergency

Schools and local businesses have shuttered during what has become the second worst flooding in Venice history. The exceptionally high tides, known as acqua alta in Italian, have flooded more than 85 percent of the lagoon city, taken an elderly man's life, and threatens delicate works of art located in historic areas. The mayor of Venice, Luigi Brugnaro, has declared a state of emergency. It's the "worst flooding in Venice in over 50 years," according to the Associated Press (AP).

"Venice is on its knees," wrote Mayor Brugnaro on Twitter. He implored the public to continue posting images of the damage caused by the tides. Each photo or video will be used as evidence to ask for assistance from the Italian government. "The situation is dramatic. We ask the government to help us," he stated in a translation provided by the BBC.

Images uploaded online showed shopkeepers moving their goods to prevent water damage, boats stranded in various areas, tourists wading through water as they walked, and cafés with floating chairs and tables. The water level peaked at around six feet by late Tuesday.

The flooding has also caused electrical and fire hazards due to short circuiting. The unnamed man who passed away was electrocuted while trying to start a pump in his home.

The AP reported that the crypt beneath St. Mark's Basilica, a famous cathedral built during the 11th century, was flooded for the second time in its history. The damage done could be worth "about millions of euros," said the lead curator of the church, Carlo Alberto Tesserin. "We said last year that the Basilica had aged 20 years in a high tide. It risks having aged much more than that in this one."

Tesserin continues to worry about the protection of the historic church. "The damage we see now is nothing compared to that within the walls. The salt enters the marble, the bricks, everywhere," he said to Agence France-Presse, an international news agency. Last year, warnings about the potential damage from high tides had been ignored.

"The experts gave us ample warning," he lamented. "They weren't listened to."

In light of the flooding, the UNESCO World Heritage Centre stated it will keep a close eye on the damage done to Venice and will speak with the authorities about any assistance the organization can provide. The city, and its lagoon, was added to the World Heritage List in 1987.

The area has always been prone to flooding, but the frequency of these events have notably increased within the past two decades. The combination of overtourism — primarily in the form of heavy cruise ship traffic — and climate change have worn away at the banks surrounding the city. According to The Guardian, this has eroded the underwater supports of buildings and polluted the local waters. Venice's location also makes it exceptionally vulnerable to rising sea levels that continue to increase as climate change makes its mark on water-reliant communities. To make matters worse, the famed city has been slowly sinking due to groundwater pumping and centuries of building and development on the land.

"While we should try to avoid attributing a single event to climate change, the increased frequency of these exceptional tides is obviously a big concern," wrote BBC meteorologist Nikki Berry. "In our changing climate, sea levels are rising and a city such as Venice, which is also sinking, is particularly susceptible to such changes."

The city of Venice has struggled to protect itself from the waters for years. Elevated boardwalks were installed for residents to traverse as the frequency of high tides increased, but intense storms have destroyed nearly a third of them, noted NPR. A project that promised to erect floodgates to protect the city, called 'MOSE,' has been roadblocked due to scandals and political corruption and still has no end date in sight.

And the citizens have become fed up. Accusations of political corruption and the uncontrolled, rampant tourism have been blamed for causing the local population of the city to drop over the past 50 years, stated CNN. Now, Venetians aren't certain if floodgates would even work anymore.

The mayor describes the flooding as a "dramatic situation" that will require a lot of time to repair. The curator of the Basilica has implored the government to act quickly to protect the city. But, as tourists continued their day plans in the city, wearing protection to keep their shoes from getting wet, the citizens could only assess the damage to their belongings and brace themselves for more high tides — reported to come in the next few days.