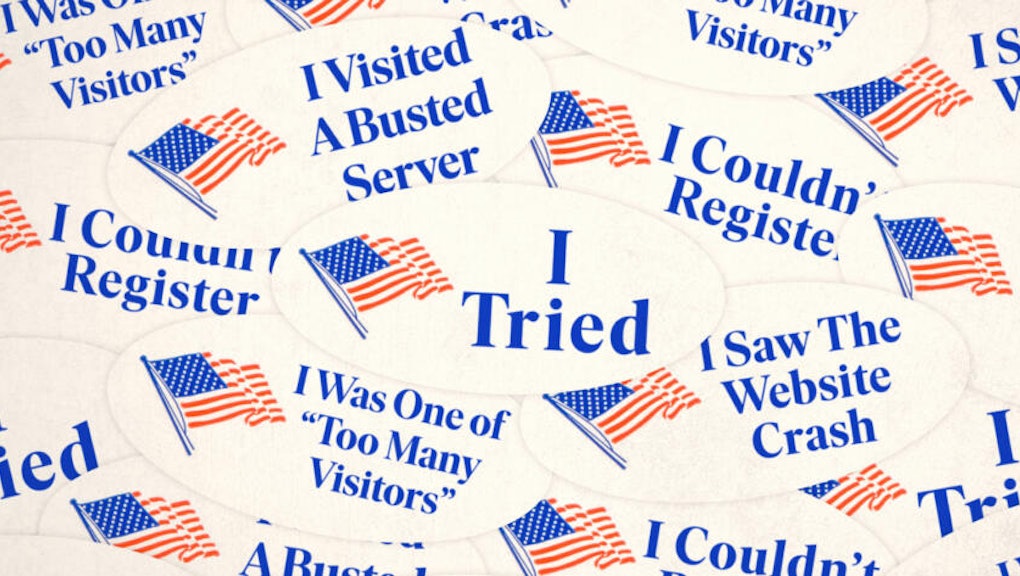 Earlier this month, the calls, many from swing states, started coming in to the Election Protection hotline, a service administered by the Voting Rights Project of the Lawyers’ Committee for Civil Rights Under Law, a nonprofit in Washington, D.C.

From Florida, callers said the voter registration website had collapsed, locking them out just as the deadline for registering to vote approached.

A week later, more reports of stymied voters came in, this time from Virginia. On the last day of registration there, the registration site went totally down.

Ryan Snow, a legal fellow at the Voting Rights Project, said this is not the first year voting rights advocates have seen some combination of bad luck and bad infrastructure derail voters trying to register around the country.

There aren’t national statistics on failures, but voters in states around the country have pointed to problems like inaccurately labeled online forms, burdensome sign-up requirements, or, in some states, no way to register online at all. Other states have dealt with crashes too: In early October, voters in Pennsylvania also faced issues with the state’s registration system.

Crashes often generate local headlines — Florida and Virginia have poor track records, but there have been similar incidents in Georgia and New York — and experts recognize the outages as part of a long-running pattern, with potentially serious consequences. Tens of thousands of voters may try and fail to sign up on the last day of registration, enough to potentially swing the results of a hotly contested race.

Matt Bernhard, a research engineer at the nonprofit voting technology company VotingWorks, told The Markup that the cause is often simple: A website sees increased traffic, the system buckles under the load, and voters are locked out.

In Pennsylvania, this year’s crash was caused by a data center outage. Florida’s problems were blamed on heavy traffic and misconfigured servers. In Virginia, where there was also an outage in 2016, it transpired that an accidentally cut fiber-optic cable was responsible for the outage.

States often rely on fragile systems for public services generally, whether they build them in-house or rely on contractors. The Markup reported earlier this year that several states’ unemployment websites were overwhelmed and crashed when the pandemic struck, leaving millions of people out of work.

“It turns out, if you’re a small government entity and then all of a sudden tens of thousands or hundreds of thousands of people are trying to access your website and you weren’t provisioned for it, it’s going to go down,” Bernhard said.

Still, additional factors are making 2020 particularly strenuous for registration systems. Voters are turning to online registration as the pandemic keeps them home, and, Snow said, in-person registration programs, which can register thousands of voters, have been canceled for safety reasons.

Rules around programs like absentee and mail-in voting have also changed substantially this year in response to the pandemic, Bernhard said, and making the registration system responsive to those new rules may also be contributing to the problem this year.

States have responded in different ways to this year’s crashes and complaints of potential voters being shut out of registering.

Virginia officials said publicly that they couldn’t unilaterally extend registration under the law but said they’d support an order from a court to keep registration open. Snow’s group obliged and filed a lawsuit against the state of Virginia to allow registration to continue for another two days past the deadline. Judge John A. Gibney of the U.S. District Court for the Eastern District of Virginia granted the group’s request.

In Florida, the state government issued an extension of less than a day, despite civil rights groups filing suit to extend it for two. Judge Mark E. Walker of the U.S. District Court for the Northern District of Florida said the state had “failed its citizens” and predicted “mayhem” come election day but rejected the legal challenge as likely to create further chaos.

Mark Ard, a spokesperson for the Florida Department of State, said in an emailed statement that “an unprecedented 1.1 million requests per hour” had taxed the registration site but that officials haven’t tied the traffic “to any one factor or source.” (There was speculation that an encouraging get-out-the-vote tweet from Ariana Grande may have contributed to the traffic spike, but officials said misconfigured servers made the system especially prone to failure.)

Daniel Egan, a spokesperson for the Pennsylvania Office of Administration, said in a statement to The Markup that, following the outage on a Saturday evening, all services were restored by early Monday morning. “There is no evidence of loss of data or malicious activity associated with the outage,” he said in the statement. “Voter registration forms were available for download throughout the situation.”

The window to register wasn’t extended and closed two weeks after the incident.

As the states were quick to point out, there’s no evidence that this year’s outages were caused intentionally, but the incidents point to serious vulnerabilities.

“If our own voters can tip over our voting systems, could you imagine what a coordinated [distributed denial-of-service] attack or something like that could do?” Bernhard asks.

Calls for Improving the System

To remedy the issue, states will have to make long-term investments in their registration systems. Some cash is already going to those projects. The National Conference of State Legislatures notes that some states have tapped into money dispersed from the 2002 Help America Vote Act, while others have leaned on their own budgets. Some states have appropriated hundreds of thousands of dollars, or even millions, to build systems.

But when crashes do happen, organizations like Snow’s act retroactively, filing emergency lawsuits after a shutdown and hoping that a judge agrees to extend the deadline. Even when deadlines are extended, though, a number of people are likely locked out of participation.

If you’re not maintaining critical infrastructure and it results in people not being able to vote, that’s voter suppression by inaction. - Ryan Snow, legal fellow, Lawyer’s Committee for Civil Rights under Law

Florida, for example, approved an amendment that would allow people with a felony record to vote in this election, Snow said, but confusion around mandatory fines and fees left many of those voters struggling to register until the end of the deadline. That may have been one speed bump too many for some.

Other voters who tried and failed to register may not even hear about an extension when it happens. States, he said, need to take responsibility for the known weaknesses in their registration systems.

“If you’re not maintaining critical infrastructure and it results in people not being able to vote,” Snow said, “that’s voter suppression by inaction.”

More like this
Why is Facebook this confused over letting Donald Trump back?
By Rafi Schwartz
Instagram now lets you add pronouns to your profile. Here's how to do it
By AJ Dellinger
The ethics of solar power are more complicated than you think
By Vanessa Taylor
Stay up to date