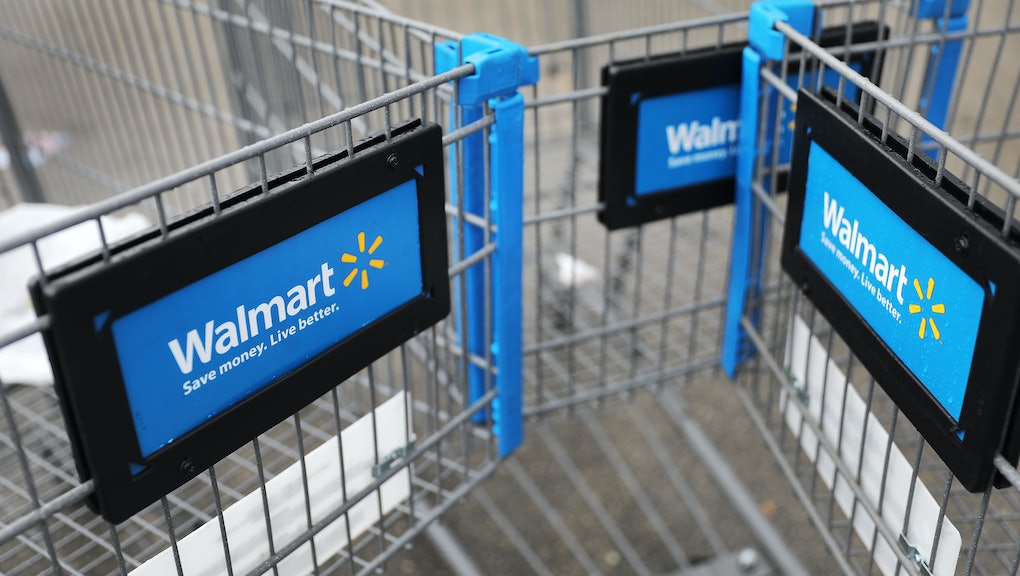 Believe it or not, you used to be able to buy a pair of “Blue Lives Matter” booty shorts on the Walmart website. They even sold matching T-shirts and neckties, for the uber-narcs. Alongside all the “thin blue line” crap, there were “Irish Lives Matter” and “All Lives Matter” tees for sale, too.

After Walmart employees and the public complained about the controversial merchandise, however, the retail giant pulled the offending items from its website on Monday. A company rep explained that Walmart only recently learned that the phrase “All Lives Matter” is primarily wielded by racists, whose aim is to detract from the message of the Black Lives Matter movement.

"We fundamentally believe all lives do matter and every individual deserves respect,'' Walmart said in a statement. "However, as we listened, we came to understand that the way some, but not all, people are using the phrase 'All Lives Matter' in the current environment intentionally minimized the focus on the painful reality of racial inequity."

The offending items were being sold through Walmart’s extensive third-party marketplace, where vendors can sell their own merchandise under the Walmart umbrella, similar to Amazon’s model. And this is hardly the first time the retailer has come under fire for allowing questionable commodities to be sold on its platform.

In 2016, Walmart came under fire for selling a coffee mug inscribed with, “Got retard?” That same year, the big box store removed a number of offensive shirts from its website, including one that read, “I’d rather be snorting cocaine off a hooker’s ass.”

Also in 2016, Walmart took flack for selling a hoodie that read, “Bulletproof: Black Lives Matter.” But that merch removal was prompted by a complaint from the national president of the Fraternal Order of Police, who wrote a public letter to Walmart denouncing its promotion of the Black Lives Matter movement.

Walmart’s website is an equal opportunity offender, evidently. Over the years, the retailer has drawn ire from people on all points of the political spectrum. In 2017, Walmart removed a t-shirt from its marketplace that encouraged lynching journalists. It read, “Rope. Tree. Journalist. SOME ASSEMBLY REQUIRED.”

In 2018, the company got in trouble with conservatives for selling a t-shirt and a baby onesie emblazoned with “Impeach 45,” a call to remove Donald Trump from office. Just last December, Walmart got caught selling a holiday sweater featuring a snowman doing lines of cocaine atop the phrase, “Let it snow.”

The home of “rollback pricing” recently took another stand for racial justice in America: Earlier this month, it said it’d stop displaying the Mississippi state flag, the last in the nation to feature the Confederate battle emblem. On Sunday, the Mississippi state legislature passed a bill to replace its flag, and voters will decide on a new design in the November election.

More like this
The S Factor studio is facing allegations of exploitation and racial insensitivity
By Tracey Anne Duncan
A Hot Vax Summer is impossible when my family in India is still struggling
By Angel Kumari
Homophobes tried to sabotage a bakery for selling Pride cookies. They failed miserably
By Tracey Anne Duncan
Stay up to date