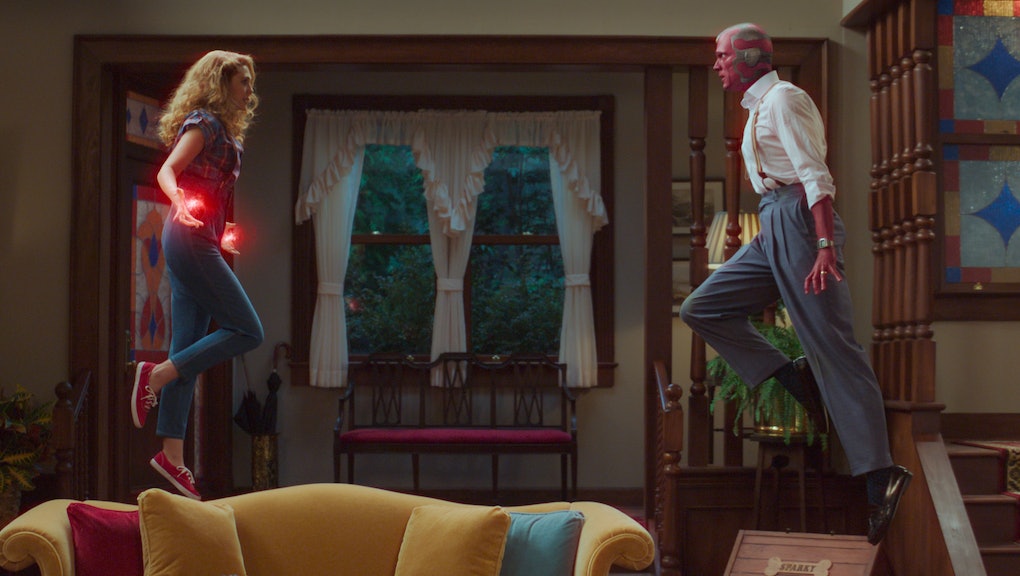 Elizabeth Olsen is Wanda Maximoff and Paul Bettany is Vision in Marvel Studios' "WandaVision" on Disney+.

Explaining the premise of WandaVision to the uninitiated is rather tricky. The show emulates classic sitcoms, like Bewitched and The Brady Bunch, but its protagonists are superheroes. Specifically, Wanda Maximoff (Elizabeth Olsen) has magical powers and her husband, Vision (Paul Bettany), is an android. Oh, and they’re both members of the Avengers. Detailing the reasoning behind this genre mashup would spoil the larger premise of the show, but rest assured: WandaVision eventually delivers the high-octane action scenes audiences expect from the Marvel Cinematic Universe (MCU).

I’ve been encouraging friends to just dive in without fully understanding what WandaVision is about. Go along with it, you’ll be entertained. Tons of people agree, because over the course of nine weekly installments, the show became a massive hit for Disney+, cementing the streamer as an original content powerhouse. Meanwhile, parallel intrigue unspooled on TikTok, where fans gathered to swap theories and memes after each episode dropped. Disney executives were likely thrilled with the organic advertising.

WandaVision’s popularity is not entirely shocking, considering how strongly MCU films perform at the box office (in pre-pandemic times, at least). What’s interesting is that it’s by far the most creative entry in the MCU. And yet it’s also consciously part of the corporate machine: narrative threads teased in the series finale set up at least three possible spin-off projects. I’m amazed at how masterfully WandaVision straddles the line between so many things — not just sitcoms and superheroes but also prestige television and franchise blockbusters.

How has it thread such a fine needle? Well, an uncommon attention to aesthetics is one way. From its uncanny production design to its meticulous screen aspect ratios, WandaVision painstakingly embodies TV tropes through the decades. Every episode has even its own historically accurate, earworm of a theme song. (The tune, sung by star Kathryn Hahn, recently topped the iTunes charts.) Speaking of which, WandaVision has reminded everyone that Hahn is an incredible actress, inspiring something of a “Hahnaissance” and earning her an army of “stahns.” Finally, the series centered its story on grief and the profound pain of loss — a topic extra resonant after a year of disease and death on a massive scale. Wanda’s journey from denial and fabrication to acceptance and healing is both cathartic and heartbreaking.

Still, at its core, WandaVision is more pop than art. As I mentioned, after several episodes of the time-traveling sitcom schtick, it clicks into the larger MCU. The show does a pretty good job of explaining the backstory of Wanda and Vision’s relationship, but it certainly helps to have some external knowledge about the franchise. You could glean that from watching all 23 films in the MCU (to date), paying special attention to Avengers: Age of Ultron, Captain America: Civil War, and Avengers: Infinity War. Or you could fall down a few fandom Wiki rabbit holes and be just fine, too. As with most superhero stories, WandaVision leans into outlandish fantasy, mashing up magic and extraterrestrials alongside secret agents and sentient A.I. For all the many, many millions Disney+ spent making its first Marvel original series (both on big, flashy fight scenes and on CGI to edit out Bettany’s ears, no joke), the streamer has a hit on its hands that’ll undoubtedly pay dividends.

Even though it traffics in some heavy subject matter, WandaVision is a viewing delight. The one thing I actively disliked about the show was its gratuitously long credits — especially when there was no “bonus scene” tacked on for suspense. Seriously, the final 10 minutes of several already-brief episodes were devoted to them. It drove me nuts.

But that's nitpicking. Because even though I recognized WandaVision’s inherent fluffiness while getting absolutely hooked on it, I'm mesmerized by how deftly the show refused to be pigeonholed as any one thing. It was refreshing to watch the MCU dip its toes into higher-concept storytelling. May WandaVision’s runaway success be a harbinger of more ambitious, genre-bending entertainment in the future.

More like this
Issa Rae, Lil Nas X, and J-Lo just gave us a masterclass in social media
By Keith Nelson Jr.
A crisis PR firm dragged the Golden Globes for its discrimination. Will it listen?
By Brandon Yu
More assholes on airplanes should be duct taped to their seats
By Brandon Yu
Stay up to date