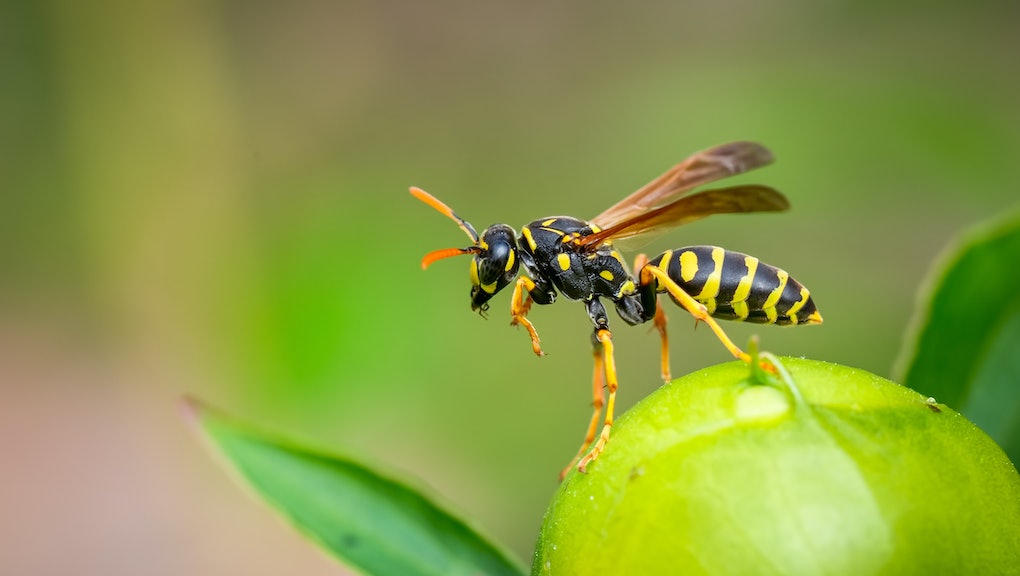 Wasps are smarter than you realize, according to terrifying new study

Think wasps are all stings and no intellect? Not quite. A new study from the University of Michigan revealed that there's evidence that paper wasps are actually quite smart, behaving in shockingly developed ways like making logical inferences and then decisions based on those inferences. The report, which is based on evolutionary biologist Elizabeth Tibbetts's findings, marks a highlight in invertebrate (creatures without backbones) studies. It confirms that the paper wasp is the first invertebrate to exhibit this behavior — at least in front of researchers.

In the past, it's been proven that humans, monkeys, birds, and fish can make logical inferences, but never invertebrates; when researchers attempted to perform logical inference tests on honeybees in 2003, the result was just a lot of confused bees. Yet while paper wasps and honeybees have similarly sized brains, about the size of a rice grain, wasps have more advanced social skills that suits their complex hierarchy.

"Honeybees have one queen and equally-ranked female workers," explained Vice in an article on the wasp study. In comparison, paper wasp society is more complex and competitive, with "hierarchical ranks of female 'foundresses' that must compete for food, reproductive opportunities, and status." In tests conducted over the past 20 years, Tibbetts and her team have confirmed wasps' advanced behavior, revealing that they also have the ability to remember social interactions with other wasps, recognize familiar and unfamiliar wasp faces, and possess long-lasting memories.

With the logic experiment, Tibbetts decided to find out for certain if wasps' social skills would make up for their small brain size — could they succeed where honeybees failed? To test the animals' abilities, she paired certain colors together — one that came with a gentle but unpleasant electric shock, and the other that was totally safe. She used the letters A, B, C, D, E to represent each color, with A being least dangerous (no electric shock) and E being the most dangerous (always an electric shock). The groups of wasps soon learned which colors were most likely to get them electrocuted, and once Tibbetts was certain the wasps had mastered that element, her team switched up the combinations to see what else the creatures would do.

Shockingly, the majority of wasps managed to deduce that the colors closer to A were less likely to be electrified, even in instances where the pairs were in unfamiliar combinations. "I thought wasps might get confused, just like bees," Tibbetts said in the report. "But they had no trouble figuring out that a particular color was safe in some situations and not safe in other situations."

It's an astounding find, and the study notes that the experiment adds to "a growing body of evidence that the miniature nervous systems of insects do not limit sophisticated behaviors." Yet as the report doesn't directly pinpoint a cause for the wasps' logical behavior, it begs the question: why would wasps actually need to be able to do this?

According to Tibbetts, it's possibly so they can strategize fighting tactics. "Wasps could figure out whether or not they are likely to beat a rival without actually fighting with the rival,” she told Vice. “For example, if a wasp saw Jane win a fight with Lisa and that wasp had previously won a fight with Jane, the wasp could infer that she could probably beat Lisa.”

Tibbetts' fascinating study should serve as a caution for all of us — don't underestimate that bug, because it just might remember you later.

More like this
Biden's pledges aren't enough to avoid the worst effects of climate change, new study says
By AJ Dellinger
Brood X is here, but I'm okay with it actually
By Rafi Schwartz
Worm composting: A beginner's guide
By AJ Dellinger
Stay up to date