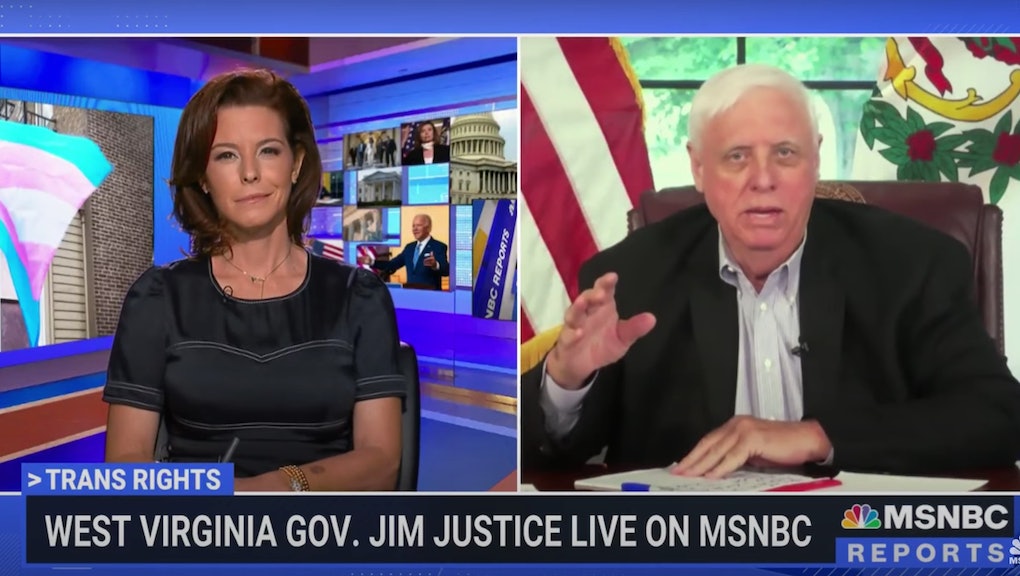 Admittedly, I couldn't tell you what the chief executive of a major industrial state does every second of every day. But I have to assume that West Virginia's Republican Gov. Jim Justice should have a pretty busy schedule of, y'know, being the governor of West Virginia. I say "should" because, as Justice demonstrated this week, he evidently has a ton of free time on his hands — specifically, free time to make life miserable for his transgender constituents.

In an interview with MSNBC's Stephanie Ruhle on Friday, Justice absolutely flubbed a series of very basic questions about his decision to sign a deeply hateful bill that bars transgender athletes from competing in women's sports at the middle school, high school, and college levels.

"Can you give me one example of a transgender child trying to get an unfair advantage — just one — in your state?" Ruhle asked Justice. This seems like a perfectly reasonable — and, if you're in the business of giving nationally televised interviews, incredibly predictable — question.

Justice, however, seemingly had no idea he was going to have to justify why he'd "proudly" signed a bill that discriminated against hundreds, if not thousands, of his own constituents. Instead, he admitted that not only could he not think of a single specific example. Worse yet, he admitted his sole entry point on the issue was the fact that he — a governor! — also had the time to coach a basketball team.

"I coach a girl's basketball team and I can tell you — we all know what an absolute advantage boys would have playing against girls," Justice stammered. "We don't need that."

"West Virginia ranks 45th in education, 47th in health care, 48th on the economy, and 50th on infrastructure," a visibly irritated Ruhle informed Justice. "I just named four things that would seem to me to be a much bigger priority."

"I didn't make it a priority," Justice weakly responded. "It wasn't my bill."

Here's a piece of advice: If you're the governor of a state being asked to justify your decision to make a bill a law, saying "it wasn't my decision" is not exactly what most people would call strong and decisive leadership — especially after you've already proclaimed that you're going to sign that bill "and sign it proudly because I really believe that's the right thing to do."

Incredibly, some in the West Virginia legislature pushed the passage of the transphobic bill by claiming it could actually attract people to a state that's been steadily losing residents for the past decade.

"This isn't going to bring people to West Virginia," Democratic state Rep. Cody Thompson countered, during debate over the bill. “This just sends a message across the country that we're closed-minded and we don't accept you for who you are."

Presumably Gov. Justice, with all that time on his hands, has carefully considered all this, and come to the conclusion that, actually, he's fine with that.

More like this
Title IX will once again protect against gender identity discrimination
By Rafi Schwartz
The EACH Act would overturn a "blatantly racist" abortion rule. Will it pass?
By Clare Busch
'Dobbs v. Jackson Women's Health' is SCOTUS's first chance to overturn 'Roe'
By Rafi Schwartz
Stay up to date