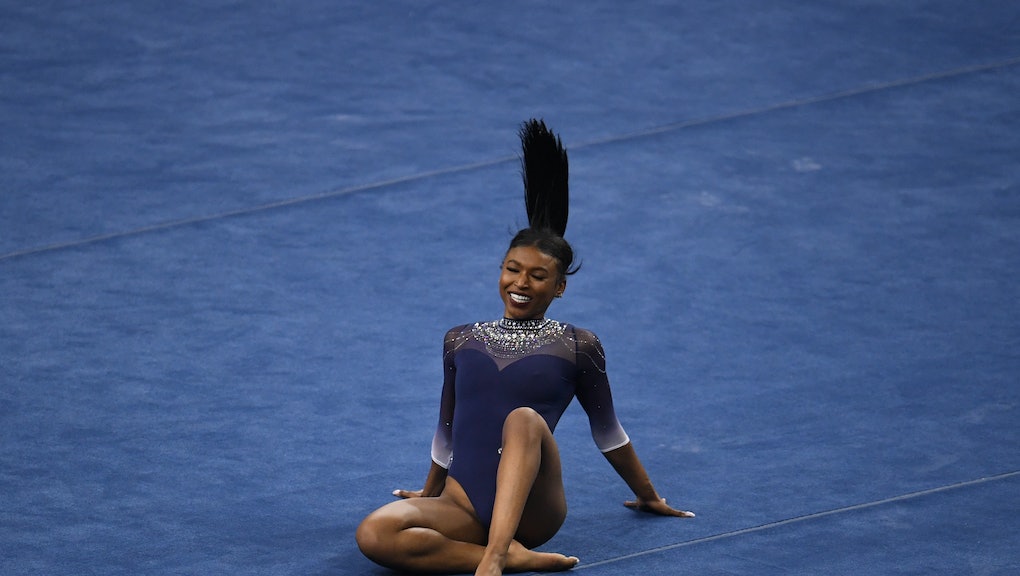 Vaulting herself high off the mat to a medley of tunes by artists like Kendrick Lamar, Missy Elliott, and Tupac Shakur, gymnast Nia Dennis makes handsprings, aerial splits, and all sorts of other complicated feats of athleticism look downright easy. Video of the UCLA senior performing a joyful floor routine saluting Black culture drew millions of views on social media over the weekend. Stars like Simone Biles (currently considered the world's greatest gymnast) sang Dennis's praises on Twitter. And it seems like she impressed the judges, too. Dennis scored 9.95, clinching a victory for her team over Arizona State University.

This isn’t the 21-year-old gymnast's first brush with viral fame. Last winter, her floor routine to a medley of Beyoncé songs racked up over 2 million views on YouTube in under 24 hours, earning her fans like Alicia Keys and Gabrielle Union. (It also earned her a 9.975 score from judges.) Ellen DeGeneres invited Dennis to perform a condensed version of the routine on her talk show last March, while her mother, father, and 10-year-old sister cheered from the front row.

Dennis tapped into her personal history while conceptualizing this year's routine. She paid homage to her dad, who was part of a fraternity, by incorporating stepping and saluted her home state by doing the C-walk to Tupac's "California Love."

In the video of her performance, you can see Dennis's teammates doing every move along with her. UCLA works with volunteer assistant coach B. J. Das on their floor routines; Das is a former college gymnast and current professional dancer and choreographer who's performed with Beyonce´, Pink, and other major pop acts. Looks like she might have some more job offers coming her way.

More like this
Lil Nas X’s ‘Montero’ is a vulnerable guidebook on self-acceptance
By Brandon Yu
Lil Nas X's 'baby registry' proves trolling can be done with heart
By Brandon Yu
Malika Andrews isn’t just a Band-Aid for ESPN. She’s brilliant in her own right
By Keith Nelson Jr.
Stay up to date