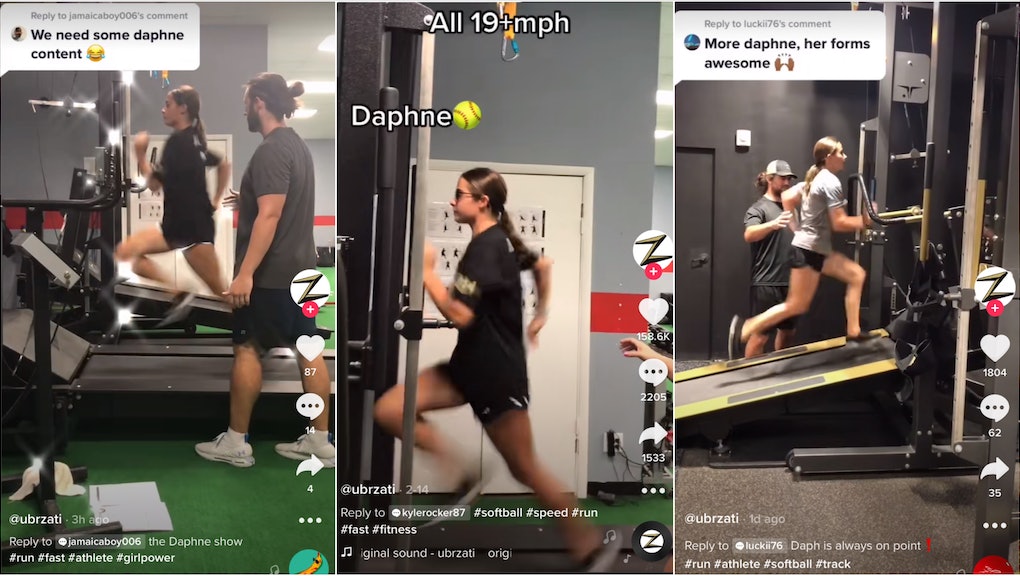 We asked Daphne, the viral TikTok runner, how she got so damn fast

The world’s fastest human, Usain Bolt, hit a top speed of about 27½ mph just past the midpoint of his world record-breaking 100-meter dash in 2009. That’s really, really fast. To put it in perspective, elite marathoners who maintain a five-minute-mile pace are moving about 12 mph. We schlubs who average in the eight-to-ten-minute-mile range are running between six and seven mph.

That’s why TikToks of teenagers running stupid fast have the internet dumbfounded. One video in particular, of four high school softball players all running more than 19 mph, is particularly mesmerizing. Shany, “X,” and Haley are clearly pushing themselves, but the fourth runner, Daphne, seems to just float. Expressionless, not even bothering to take off her glasses, she barely seems to exert herself. She makes running at a superhuman pace look breezy. Of course, people on the internet are obsessed with her.

So what’s the secret to running really, really fast like the viral softball girls? Well, to start you'd need to put in an ungodly number of hours at a speed training gym. Daphne goes to UbrZati, the Florida gym that uploaded the now-famous video. To get a little science-y, our muscles are composed of three types of fibers: slow-twitch, or type I, have low power but high endurance capabilities; fast-twitch (which come in type IIa and IIb) tire out quickly but exert more explosive force. If you want to get really fast, you have to develop those fast-twitch muscle fibers, which is the sort of conditioning UbrZati specializes in.

Daphne Aravena, 15, has been training with UbrZati for nearly two years to increase her speed and agility as an athlete. She not only plays softball but also runs track and dives. Her UbrZati coach, Mike DeVinney, said Aravena is “an absolute sponge, soaking up all the tips and information she can to become the best version of herself.” Her gait while nearly keeping pace with an actual Roadrunner (the bird moves about 20 mph) looks effortless, DeVinney tells Mic, “because her great running technique allows her body to work fluidly and not waste energy with useless movements.”

Aravena tells Mic it took “lots of time and hard work” to get so darn fast. “It looks effortless, because I’m so used to running at high speeds,” she messaged on Instagram. “It looks like there’s no challenge at all, because of all the training. But for me it did feel effortless 😂,” Aravena confessed, appending the “crying laughing” emoji.

DeVinney noted that distance training is great for someone looking to generally get healthier. But speed training is massively beneficial for athletes aiming to perform better in their specific sport. Aravena said she “can’t even explain” how much she’s improved on the field: “It makes me have quick reactions for softball, and I am able to run the bases faster and other stuff,” she tells Mic. The teen credited her coaches at UbrZati for making “all of this possible” and said her sudden TikTok fame has been “surprising but fun!”

As the viral video of the softball speedsters spread across social media, Aravena became its breakout star, with commenters demanding “more Daphne content.” UbrZati has begun delivering, posting Aravena-centric compilations on TikTok. “We love the fact that we have so many followers asking to see more of our fast female athletes,” DeVinney said. “There are so many younger women out there looking for motivation and role models to set goals in what they want to achieve.” He added that showing female athletes outpacing the dudes levels the field, in a way, which contributes to “a better environment in athletics overall.”

More like this
March Madness might be over, but the fight for gender justice continues
By Lindsey Darvin, Anita M. Moorman and Ann Pegoraro
Miss Papua New Guinea's TikTok twerks aren't the problem — misogyny is
By Kara Weisenstein
You can feel for Khloé Kardashian and also recognize she's part of the problem
By Kara Weisenstein
Stay up to date