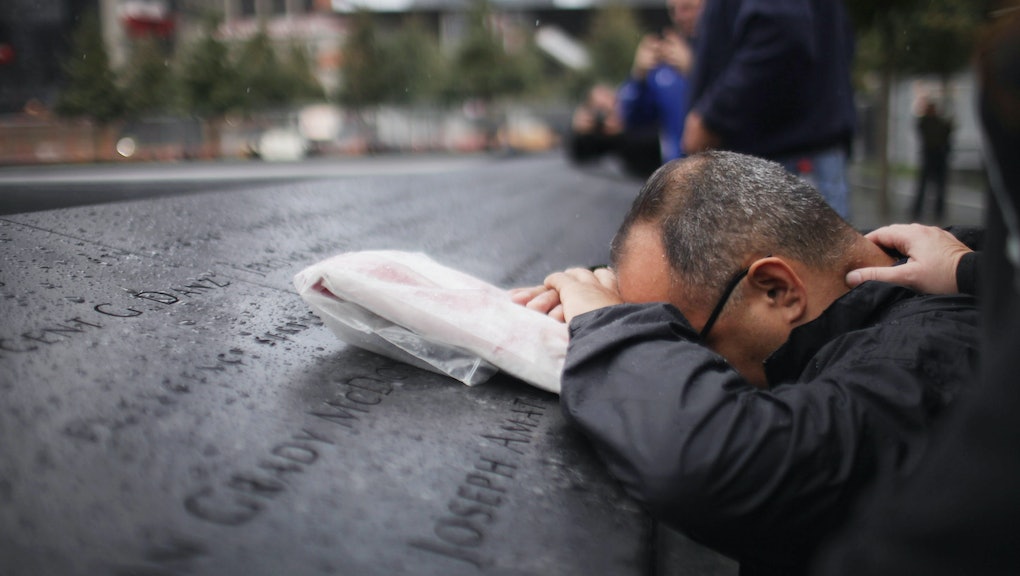 We learned collective grief from 9/11. We could really use those coping skills right now

Tuesday, September 11, 2001 began like any other school day for Latagia Copeland-Tyronce, who was 15 and lived in Washington, D.C. at the time — until someone called to notify her teacher that the Twin Towers had fallen. Her teacher turned on the TV to a news report of the attack and left class for the day. Meanwhile, Copeland-Tyronce noticed smoke from her classroom window, which she later learned had drifted from a flight that had crashed into the Pentagon. Her school shut down for a few days, but her mom didn’t let her return until the following week.

In the wake of the chaos and confusion of that day, Copeland–Tyronce recalls feeling “a lot of sadness, a lot of anxiety, because it seemed like we just weren’t safe anymore ... We felt like anything could happen.” The D.C. area sniper attacks the following year created an added layer of fear for her and her family. But 9/11, the first large-scale tragedy she’d experienced, helped her deal with another, 20 years later: the pandemic.

“I had been through so many tragic things, including 9/11 and this sniper situation, that I feel like I can handle a lot,” says Copeland-Tyronce, now a child welfare advocate, activist, writer, and blogger in Detroit. She draws on the same coping strategies she used to navigate the uncertainty of 9/11, including meditation, prayer, and resilience. Now, as back then, “people didn’t deserve what they got, but you kind have to just keep moving on and continuing to live for those who aren’t with us anymore.”

Many mental health experts agree that 9/11, like the pandemic, was a collective trauma that left us peering into the unknown, feeling scared and powerless. Both changed our lives, in some ways irrevocably. While that might sound grim, these parallels also mean we can apply the skills Copeland-Tyronce and others learned back then to help us cope now.

Both 9/11 and the pandemic jolted us from a relative sense of safety. Before 9/11, “I think there was a resting state of security that we had within our nation that was always a given,” says Akua Boateng, a psychotherapist in Philadelphia. “Yet that changed in an instant.” The resulting feelings of helplessness in New York City, the epicenter of the tragedy, rippled across the rest of the country. We shared in our loss and grief.

While our sense of national safety remained diminished after 9/11, slowly but surely, we unclenched. For nearly two decades, we didn't experience anything that rocked the country nearly as much as 9/11 did — which only intensified our sense of powerlessness once the pandemic hit in 2020, Boateng says.

Like 9/11, the pandemic created “a widespread feeling of being on edge,” explains Petros Levounis, a professor and chair of the Department of Psychiatry at Rutgers New Jersey Medical School. He adds that in both cases, the tragedies themselves more profoundly shaped the mental health of people in the eye of the storm — like first-responders during 9/11 and frontline health workers during the pandemic — whereas pre-existing psychological issues had more of an influence on the mental health of those further removed.

At the same time, it’s critical to acknowledge the differences between 9/11 and the pandemic that make a direct comparison difficult. For starters, the pandemic dealt a far bigger blow to our daily routines and social lives, Levounis says. Unlike now, we could come together to heal from 9/11 through gatherings like memorials and even sporting events.

What’s more, while both tragedies gave birth to a “new normal,” the post-pandemic “new normal” has been harder to accept, largely because we have yet to reach it. “We haven’t stabilized yet, and we’re not even sure if we’ll ever stabilize,” especially as new variants of the virus emerge, Levounis points out. “There’s no sense of an endpoint.” Boateng agrees. In any type of healing process, “there is injury, but there is recovery,” she says. “We haven’t gotten to the recovery stage because we’re still in the injury.” The focus is more on how to live with the pandemic than how to move past it, she explains.

Nonetheless, there are still plenty of mental health lessons we can glean from 9/11. As with any trauma, creating a new norm for ourselves can foster healing, according to Boateng. 9/11 instilled fears of flying and public spaces, and the pandemic, fear of human contact (including those that can occur on planes and in public).

To cope with them, Boateng says we need to implement workarounds that make us feel safe, but without isolating ourselves or denying ourselves of what allows us to thrive. In the aftermath of 9/11, that might’ve looked like traveling by car instead of by plane. Nowadays, that could mean taking an online spin class instead of hitting the gym. Since the pandemic utterly upended our routines, Levounis says, establishing new ones is especially crucial. Incorporate exercise, rest, nutrition, and other things you can control into them, Boateng says.

In any type of healing process, there is injury — but there is recovery.

Just as it did post-9/11, special attention to diet, exercise, sex, and sleep, which all have consequences for mental health, can also help us stay afloat during the pandemic, Levounis points out. Studies show that those who sought medical care and got treated for PTSD and depression post-9/11 fared better than those who didn’t, so don’t hesitate to reach out for help if you're experiencing significant symptoms, like weight loss, an inability to sleep, or numbing, and have the means to do so. “This is not the time to white-knuckle it,” he says. “You may very well need to take some medication and get some counseling for the effects of the pandemic.”

Research has shown that seeking support from others also benefited people’s mental health post-9/11, Levounis says, and Boateng points out that a number of support groups, community circles, and other safe spaces where people could share their pain cropped up after the attacks. So while it might be harder to connect in-person now, it’s worth doing what you can to build community, even virtually. Indeed, when we compare individual PTSD stemming from a personal trauma versus collective PTSD due to an event like 9/11, people tend to cope with the latter better, Levounis says.

“The worst thing you can do when you’re going through trauma is to not talk about it, is to try to push past it and not to process all the ways that it’s impacting your body and brain,” Boateng says.

And while tragedies like 9/11 and the pandemic are senseless by definition, creating our own meaning from them can also help us move forward. In one study, adults in the U.S. who found meaning in the 9/11 attacks tended to have lower post-traumatic stress symptoms. While Levounis is skeptical about whether this effect lasts all that long, Boateng believes that in general, “meaning-making is a powerful aspect of growth and healing. It helps us cultivate rationale for moving forward, which can help us deal with trauma.” This process can happen in the groups people turn to for support, she adds.

Indeed, in the time leading up to 9/11 and later, the pandemic, “Americans, we all felt like we were invincible,” Copeland-Tyronce says. But when both tragedies hit, they reminded her that “life is really precious and really short… and to do the best we can with what we have, and treat people with kindness and care, because you just never know what might happen.” Likewise, many of us have a deepened appreciation for the graduations, travel, and other experiences we took for granted that have since dissolved.

Clinging to moments of humanity has also helped Boateng cope with the pandemic, not unlike it did post-9/11. While working with a relief organization near Ground Zero at the time, she saw strangers helping people find family members and hugging others who had broken down in tears. “Human empathy and emotion was so palpable,” she says. “It’s just the natural order of who we are.”

Now, moments like neighbors dropping off food or flowers can help us find a way to move through the pandemic, which, Boateng says further underscores the importance of a support network. Science tells us that engaging in these acts of kindness is healing, too, “[helping] you to see the possibility within your own pain,” she adds. Especially in this time of rage and polarization, the practice of reminding ourselves of our shared humanity can be a beacon.

That said, being a member of a scapegoated group — like Muslims and Sikhs post-9/11 and East Asians and Southeast Asians during the pandemic — can complicate efforts to deal with collective trauma, Boateng tells Mic. Not only do we need to navigate the threats posed by the event itself, but the scapegoating, as well. Turning inward to our own communities can help remove that additional source of fear, “and that is ok,” Boateng says. “Whatever you need to do to be safe, you do that."

Shah Hasan, Virginia-based therapist, recalls that his parents’ car windows were shattered and their home egged a week after the 9/11 attacks. A teenager at the time, he worried about his family, especially his sister, who wore a hijab. Based on his experience, he offers advice to Asian Americans who are grappling with both the pandemic and xenophoba.

“For any instances of xenophobia, I think it's important to be able to talk about it with other people,” he says. “It becomes too easy to hold back from sharing due to a fear of seeming weak or vulnerable.” Talking about them with others not only helps us process them, he explains, but shows us that we do, in fact, have a support system.

Finally, we can apply what we learned post-9/11 to move toward accepting that things won’t be normal, even if the contours of the post-pandemic new normal remain hazy.

“I think one of the larger things that we had to navigate during that time and then this time is that for some time, things will not be normal, and that’s ok,” Boateng says. “There is nothing wrong with you if you are having a really hard time moving forward right now. It’s actually very appropriate for you to need time to get your bearings.” Having an awareness that tragedies like the pandemic can throw off your mood, productivity, and even your capacity to plan for the future can help you normalize that recalibrating takes time, and “you’re doing the very best you can, and that’s enough.”

In the same vein, Copeland-Tyronce found the acceptance and self-compassion she leaned on post-9/11 to be helpful in weathering the pandemic. “Just like with 9/11, you can’t go back to where things were, no matter what,” she says. All you can do is accept it, try to move forward, “and be as content with that as you can…. You just have to do the best you can with what you have and accept that things are never going to be the same.”

But like those of us who still remember 9/11 have learned, that doesn’t mean you’ll never experience joy again. “Life can still be beautiful in the future, even if it’s super rocky and messy,” Boateng says.

More like this
Could fresh air be the key to ending the pandemic?
By Melissa Pandika
'Nine Perfect Strangers' is a deranged portrait of psychedelic wellness retreats
By Erin Qualey
How to save your skin from climate change
By Melissa Pandika
Stay up to date