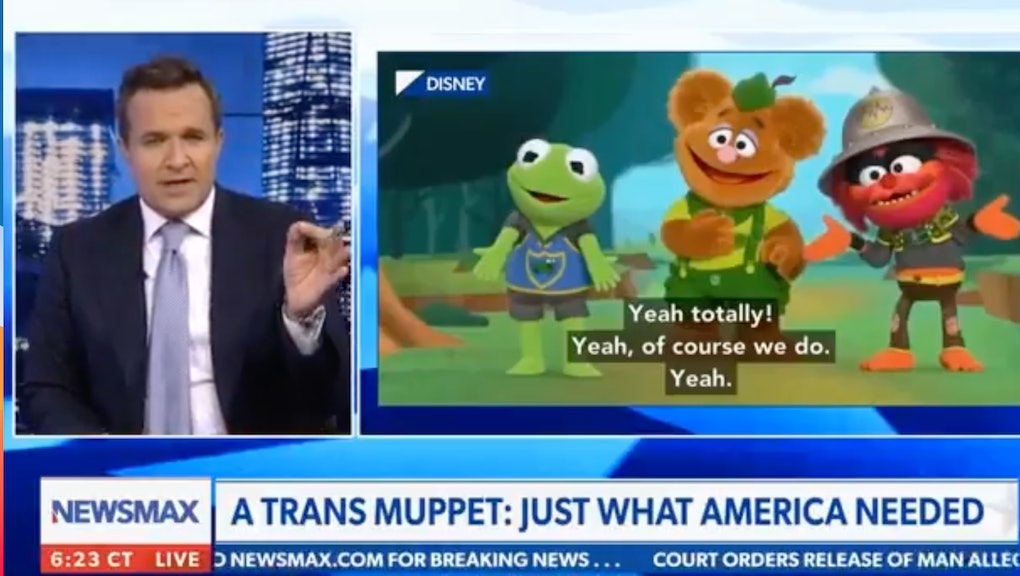 Conservative media, and the big-brained pundits therein, thrive on conflict. There is no strawman too flimsy, or minutiae too microscopic that even the most middling of the right-wing's pack of talking heads can't hype up into a Serious Crisis affecting the Heart and Soul of This Great Nation.

And lately, the name of that very real, very important crisis is: Gonzo.

Yes, Gonzo the Great — the piece of felt given form and waaaaaaaacky function by Muppet creator Jim Henson more than 50 years ago. Gonzo, a character whose sine qua non for decades has been his unapologetic embrace of who he is, regardless of public perception. Gonzo, a canonical alien from outer space who is regularly shot out of a canon and whose best friends oscillate between a chicken and a potato. Gonzo, who as the past few weeks of right-wing media would have you believe, is now at the cutting edge of a "trans agenda" of "predatory cartoons meant to usher children into gender dysphoria."

The issue, such as it is, centers on a recent episode of the CGI reboot of the Muppet Babies series, in which a toddler Gonzo wears (gasp!) a dress (oh my!) to an imaginary royal ball (quelle horreur!). Like just about everything put out by the now-Disney owned Muppet franchise these days, this is about as harmless and fluff-iffied as it gets:

Let's be clear about something: Gonzo? He's not real. Rizzo the rat? Also not real. Even in the context of the show, none of this is real — it's all an imaginary flight of fancy originating with baby versions of an entire franchise of not real characters.

But just try telling that to low-rent Fox News competitor Newsmax, which for the past week has been yammering about how Gonzo-rella is the harbinger of doom and gloom, along with all sorts of other transphobic fear-mongering.

I'd like you to try and imagine the sort of hornet nest brain it takes to say the words "if Gonzo is transgender, that is a disorder" live on national television without crumbling under your desk in shame.

Newsmax hasn't been alone in its transphobic Muppet-bashing, either. Last week, Fox News also tackled this crucial and pressing issue online and on air, lambasting Gonzo-rella by claiming: "We've allowed places like this to say, okay, yeah let's throw a little bit of this in there, a little bit more gender-fluid, maybe we'll throw some cross-dressing in there, and expect culturally for us not to change, and we have."

"It is amazing the amount of subtle and not-so-subtle left-wing messaging that you get," Fox & Friends host Peter Hegseth whined during the same segment.

And here's professional discontent Candace Owens, demanding we "bring back manly Muppets" because of Gonzo's "sick and PERVERTED" decision to, again, simply imagine himself wearing a dress.

Look. I'm not saying the Muppets are beyond reproach. Miss Piggy is a violent, abusive girlfriend. Kermit the Frog drank Vincent Price's blood. Rowlf the dog straight up killed someone. But to devote column inches and minutes of precious airtime to speculate on the gender identity of a CGI piece of felt simply for wanting to look nice at a fancy party? C'mon.