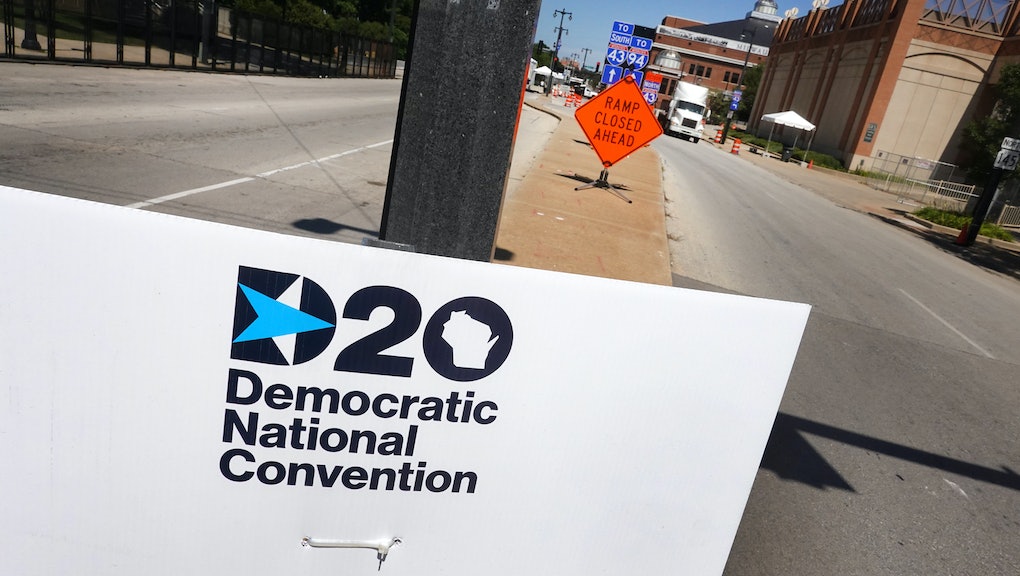 "We're out here": Formerly incarcerated activists are bringing their voices to the DNC

On Monday evening, as Americans tune in to watch the first night of the Democratic National Convention, about 2 million people likely won't be able to watch at all, because they're incarcerated. And in addition to lacking the ability to see the hopeful leaders of the country speak their intentions, many incarcerated folks won't be able to vote either. But this year, in a historic first, formerly incarcerated people will have their voices heard at the Democrats' quadrennial summer bash, as members of JustLeadershipUSA, an organization committed to cutting in half the number of incarcerated people in the U.S., will speak as part of the DNC's unofficial affiliate programming.

JustLeadershipUSA works to empower formerly incarcerated people with skills to help shape policy. People with personal experience navigating the criminal-legal system will address viewers during the DNC's unofficial programing Monday and Tuesday in an effort to influence the party delegates and other Democratic bigwigs who will vote on the official 2020 platform.

As evidenced by their unofficial speaking slot during the week's programming, the biggest issue facing people harmed by the country's history of mass incarceration is that they're largely not given a seat at the table. DeAnna Hoskins, the president and CEO of JustLeadershipUSA, tells Mic that historically, people without personal experience navigating the criminal-legal system have instituted systems that disproportionally criminalize Black and brown people, and additionally offer "solutions" that in reality aren't grounded in community needs.

Instead, Hoskins says, what's required is a strategic re-investment in Black and brown communities, and that re-investment should be led by people who live in those communities. Hoskins tells Mic that the Biden-Sanders Unity Task Force is a prime example of the failure to center the expertise of people who have been incarcerated. "While we applaud their recommendations around criminal justice [and] we applaud their acknowledgment of the harm of the '94 crime bill, what we immediately noticed is the same mistake you all made in '94 you are setting up to make again: not having us included when you are discussing those recommendations." The task force, created by the presumptive nominee and progressive Sen. Bernie Sanders, was an effort to unite the two wings of the Democratic Party.

In the 1990s, lawmakers saw increasing crime rates and generally figured there was one way to solve it: by locking up the people committing crimes. The result was the criminalization of poor, Black, and brown communities, driven by the unforgiving approach of "tough-on-crime" policies such as the three-strikes law and mandatory minimum sentences. Policy-makers changed the definitions of criminal activity and created harsher penalties for those crimes.

Twenty years later, instead of bringing people to the table who were incarcerated because of these racist and punitive legal standards, the Biden-Sanders task force ignored them, Hoskins says. "You are telling us what you are gonna do for us, but we know you know the power of people with lived experience because the immigration table had individuals from that community, the veterans table had people from that community," she tells Mic, drawing distinctions between the ways other issue were treated and the way criminal justice has been treated

Biden selected California Sen. Kamala Harris as his vice presidential nominee last week, a pick that has some criminal justice activists skeptical given Harris's own past involvement in law enforcement. As it stands now, the Biden-Harris platform calls for the creation of a competitive grant program for states that incentivizes abolishing mandatory minimums and increasing education funding for historically underfunded communities. These ideas stand in direct opposition to those offered in the 1994 crime bill, which was championed at the time by Biden in the Senate and even referred to by him as the "Biden Crime Bill" during his 2008 campaign for president.

For Hernán Carvente-Martinez, the national youth partnership strategist for the Youth First Initiative at No Kids In Prison, what the Democratic Party needs to do — in addition to bringing formerly incarcerated people to the table — is to talk directly with the communities that were harmed by past policies. That's how lawmakers can "find actual tangible solutions that are rooted in community," he says. Beyond that, Carvente-Martinez says he'd like to see party leaders like Biden "honoring the fact that [they] have caused harm" and holding themselves accountable for ameliorating, addressing, or remedying that harm.

And Biden has caused a lot of harm. While serving in Congress, Biden sponsored legislation that perpetuated racist standards in drug convictions and militarized local police departments. As Jamelle Bouie wrote for Slate in 2015, "Joe Biden, in other words, is the Democratic face of the drug war."

Now, he's also the face of the Democratic Party. Carvente-Martinez tells Mic that the solutions, which Black and brown communities have been demanding for decades, need to be trauma-informed. "Our communities right now need to heal," he says. "Mass incarceration has perpetuated violence on our communities" that, he says, can't be undone in a single election cycle or presidential administration. Addressing the state violence of mass incarceration will require looking the root causes of discrimination and inequality, and at the ways the American legal system perpetuates racism.

"You can do just about anything and still hold the highest office in this country, and that for us is outrageous because you can make the smallest mistake as a Black or brown kid and you can end up in prison for the rest of your life," Carvente-Martinez says. The stats bear that out: Black youth are more likely to be sentenced to jail instead of given probation, and Black youth are more likely to be arrested on drug charges than white youth, despite similar rates of drug use. According to the Sentencing Project, almost half of the "206,000 people serving life and 'virtual life' prison sentences are African American and another 15% are Latino."

The disproportionate harm done to non-white communities by incarceration and the coronavirus pandemic are emblematic of the ways that access to resources and political power determines quality of life. James Hough, an artist and activist in the Philadelphia region who was incarcerated for 23 years, hopes that "these crises combined will motivate those in power to listen and act." Hough has seen the impact of coronavirus on incarcerated people firsthand: His friend, Rudolph Sutton, was incarcerated in Pennsylvania. After serving 30 years, Sutton passed away after contracting coronavirus.

Hough tells Mic that Sutton was just days away from being released. "To see him lose his life based upon a criminal justice system that doesn't function properly — that's tragic," Hough says.

For formerly incarcerated people, it wasn't a surprise that the pandemic would hit people in prisons and jails the hardest. After all, they've experienced first-hand the often abysmal public health conditions of incarceration. "I could only imagine being behind the wall when [coronavirus] first hit and all you heard was that everybody was dying ... We know simple a common cold will spread throughout a facility," Hoskins says. Coronavirus infection rates are 5.5 times higher for those who are incarcerated versus the general population, per one analysis, and according to The Marshall Project, there have been at least 847 people behind bars who have passed away due to coronavirus.

"To actually be in a prison during that time — I can only imagine the feeling of being in a burning building without a way out," Hoskins says, "and nobody's coming to help."

Though the DNC's main attraction is the formal nomination of Biden for president and Harris for vice president, the week's policy discussions are an opportunity to set goals and objectives for state-level changes as well. Jimmie Gardener, an activist and motivational speaker who was wrongfully convicted and incarcerated for 27 years, hopes that the party platform will address the lack of employment, housing, and educational opportunities for those who've survived incarceration. Gardener wasn't supposed to be incarcerated to begin with — a criminal serologist falsified his DNA evidence — but after three decades behind bars, he's faced the hurdles of navigating life after incarceration.

One example: Formerly incarcerated people face challenges securing photo identification, which makes securing housing and employment more difficult — not to mention voting. And even with the proper documentation, options for work are severely limited due to policies that allow employers to deny opportunities to those with criminal records. It's rules like these that Gardener and others who've been incarcerated say must be eliminated, in addition to lessening punitive responses to crime. "I want to see at the convention, individuals be able to have a bigger heart," he says, in addition to substantive legislative change.

More than that, formerly incarcerated speakers are urging viewers recognize that while these kinds of restorative solutions may be new to the Democratic Party, the affected communities have been doing the work to make these policy ideas a reality. As Hoskins tells Mic: "We're out here, we're advocating ... we're fighting for our communities and we're putting all the puzzle pieces together. We're actually making sure that the people behind that wall don't think nobody out here is hearing their cry."

More like this
Biden's idea of filibuster reform is to bring back painfully long and boring floor speeches
By Vanessa Taylor
Trump kept a Gitmo prisoner detained for 5 extra years. Biden has finally freed him
By Rafi Schwartz
As Biden nears an elusive infrastructure deal, Trump is saltier than ever
By Rafi Schwartz
Stay up to date