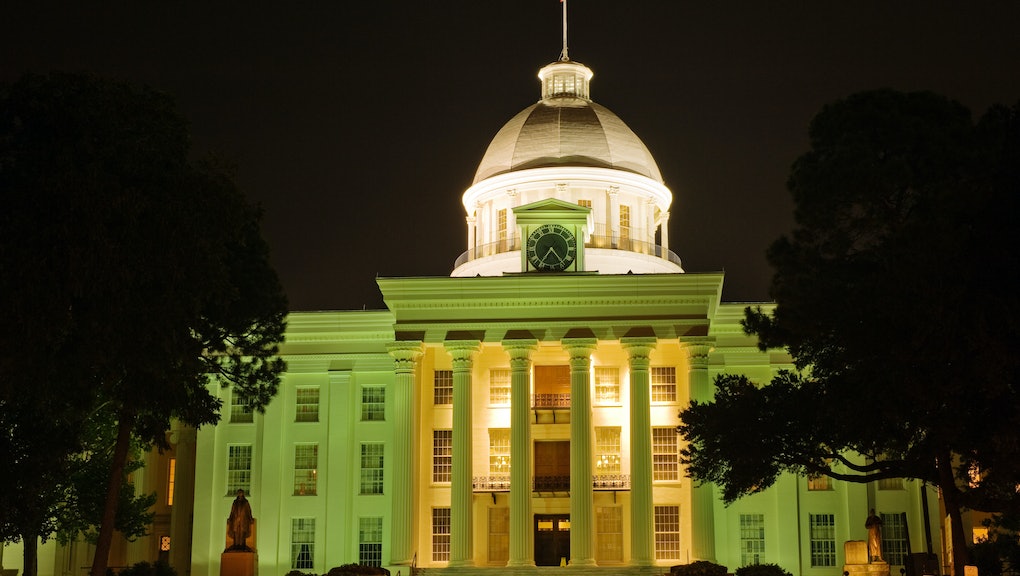 On the evening of Tuesday, May 14, the Alabama State Senate — 25 white, male Republican lawmakers — voted to approve the nation's strictest anti-abortion legislation since the passing of Roe vs. Wade in 1973. Although it still has to be signed into law by the governor, what Alabama's abortion ban does is outlaw nearly all abortion care, including in cases of rape or incest, no matter the woman's age; the only exception exists for situations in which the mother's life is in danger, as the New York Times reports.

Here's a full breakdown of everything you should know about the troubling legislation.

The bill does not technically criminalize women for abortion care, but rather, their medical care providers. Doctors who perform abortions in Alabama will now face felony charges and up to 99 years in jail, unless the procedure is performed to save the mother's life, according to the Times.

Alabama's bill is only the latest attempt by a U.S. state to almost entirely prohibit abortion; as noted in the Times article, Georgia, Kentucky, Mississippi and Ohio all have fetal heartbeat bills, which outlaw abortions six weeks after conception — before many women even know they're pregnant.

The goals of these bills, and the anti-abortion movement overall, are to do as much as possible to ban or limit the procedure, despite Roe vs. Wade having legalized abortion nationwide over 45 years ago. Abortion care in Alabama is already hard to find; only three clinics statewide perform abortions, with Alabama's only two Planned Parenthood health clinics unable to offer the procedure. This bill makes things far more difficult, particularly for women of color (who disproportionally make up the poorest people in Alabama), according to the Times, as wealthy women would likely be able to travel out of state to get abortions.

“Until now, there was no prospect of reversing Roe,” Eric Johnston, who founder and president of the Alabama Pro-Life Coalition told the New York Times. He's spent over 30 years working to ban abortion, and is responsible for drafting this bill.

Yet the nation's growing anti-abortion movement, and the makeup of the Alabama Senate, has made that terrifying prospect more of a reality. In the state's Senate, there are 35 legislators, 27 of whom are Republicans and eight of whom are Democrats. Only two of the Democrats, Linda Coleman-Madison and Priscilla Dunn (both representing Jefferson country) are women. With those kinds of statistics, it's male lawmakers who will decide the future of women's health in Alabama, as they're already doing with this bill. "This bill isn't about pro-life, or the right to life. This bill is about control," Coleman-Madison told Buzzfeed News.

Republican governor Kay Ivey still has to sign the bill into law, an act she'll only do after seeing its final version, i.e. the one that passed in the Senate on Tuesday night. If or when Ivey approves the bill, it will be enforced six months later. An approval by Ivey is likely to face lawsuits by pro-choice and women's healthcare advocates, which can trickle up to the United States Supreme Court — but that isn't comforting, considering that President Trump has appointed two right-leaning justices in his term.

That doesn't mean people won't fight back, though. For most Alabama voters, this new legislation does not represent their interests. According to the progressive think tank Data for Progress, no state in the entire nation has more than 25% of the voting population endorsing making abortion care illegal, and in Alabama specifically, data from the 2016 Cooperative Congressional Studies Survey showed only 21.4% of voters supporting an abortion ban.

Already, pro-choice activists nationwide are working to ensure the bill does not become law. "We are laser-focused on urging Gov. Kay Ivey to veto this dangerous bill. If she chooses not to, then we will take this to court and ensure that abortion remains safe and legal and accessible in the state of Alabama,” Staci Fox, president and CEO of Planned Parenthood Southeast, told the Associated Press.

For the nearly 25% of women and girls who, statistically, will need access to abortion care at some point in their lives, overturning Roe vs. Wade's crucial precedent cannot become a reality. Even when abortion is illegal (as it was previously), the procedure is still performed, often in riskier environments and at great cost to women's health. Abortions will occur, whether they are legal or not; if they're outlawed in Alabama, countless women will unnecessarily suffer.

If you want to help women in Alabama, organizations like The Yellowhammer Fund, which works to expand access to abortion care in the state, are fundraising via social media. Donate if you can, and if not, spread the word — women's lives are at stake.

More like this
FEMA said it would reimburse cities for housing homeless people. Most cities ignored the offer
By AJ Dellinger
Title IX will once again protect against gender identity discrimination
By Rafi Schwartz
West Virginia is bribing young people to get vaccinated with cold hard cash
By Vanessa Taylor
Stay up to date