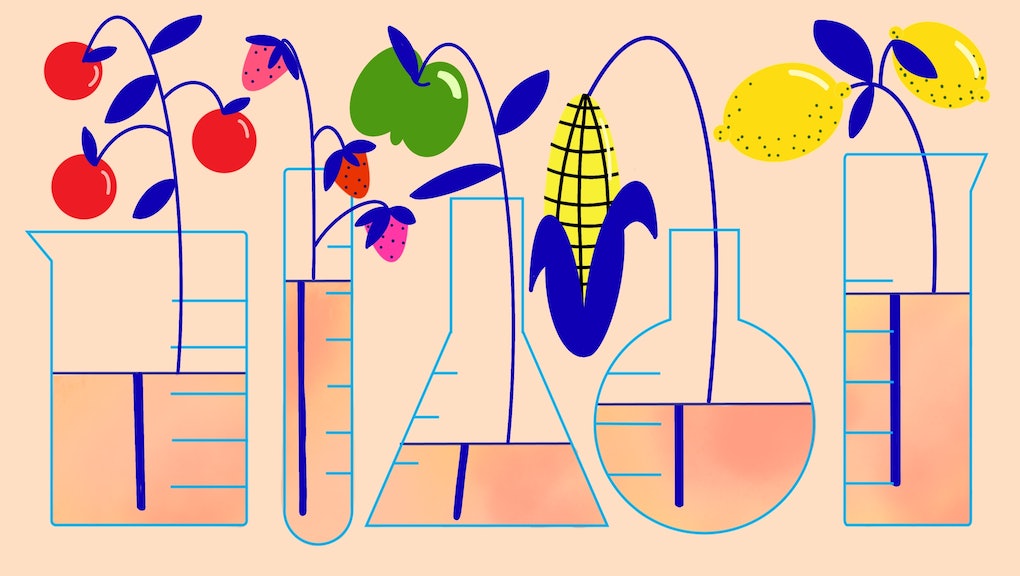 [Illustration by Maxine McCrann for Mic]

What are GMOs — and do I really need to avoid them?

Genetically modified organisms, or GMOs, tend to have a poor reputation. Play a word association game with GMOs and people often think along the lines of gross mutations, unhealthy food, and overall garbage stuff. To put it simply, in many people's minds, GMO is just another way to refer to "bad" food. But are GMOs really as evil as we think?

When it comes to GMO, there's this idea that you need to be either completely for or completely against them. Problem is, most people don't realize what makes something genetically modified, or just how common GMOs are. Fun fact: Unless you're eating certified organic foods exclusively, you're probably consuming GMOs of some kind. And if you look at the big picture, most of the "domestic" forms of food that we eat — like watermelon — don't look at all similar to their "wild" counterparts, or even their 17th-century ancestors.

Instead of pushing to say GMOs are inherently good or bad, it's important to understand what GMOs are today, and to think about their role in the future. Before we can get into any of that, though, let's break down what "genetically modified organism" really means.

Per the World Health Organization, GMOs are organisms whose genetic material "has been altered in a way that does not occur naturally by mating and/or natural recombination." Most people associate GMOs with plants; one example of how to genetically modify those is by cloning them.

Eating cloned food may sound uncomfortable, but most of us have done it. For example, bananas are clones that have been around since the Stone Age. But the key thing to notice here: GMOs aren't just called genetically modified plants for a reason. Scientists are more than capable of genetically modifying other organisms, like animals.

Last year, scientists cloned a black-footed ferret, marking the first time that any native endangered species has been cloned in the United States. However, cloning animals has been around for much longer than that. Remember Dolly the sheep, who became the first mammal successfully cloned from an adult cell in 1996?

You could try to argue that GMOs have been around for basically forever due to selective breeding. However, while many do regard selective breeding as the oldest method of genetic modification, Live Science reported that it's not usually included within the GMO food category. The first GMO to be commercialized in the U.S. was the Flavr Savr tomato in 1994.

Are GMOs bad for me?

When it comes to genetically modified food, most people are concerned about possible health risks. But there's no way to say that all GM foods are good or bad for your health. The WHO recommends that, instead, GM foods are assessed on a case-by-case basis.

One of people's biggest concerns when it comes to GM foods is allergies. However, the WHO says that on principle, "the transfer of genes from commonly allergenic organisms to non-allergic organisms is discouraged unless it can be demonstrated that the protein product of the transferred gene is not allergenic." In addition, the FDA has stated that unless you're allergic to the non-GMO version of a food, you won't be allergic to the genetically modified one.

But all of this is about food itself — not about how they're grown, or the companies associated with them. Perhaps one of the most infamous agricultural companies is Monsanto. The company produced a herbicide, Roundup, and Roundup Ready Crops, which were genetically modified to be resistant to Roundup. That way, farmers could use the herbicide to control pests in their fields without killing their crops.

However, Roundup was linked to numerous cancer cases. Roundup's links to cancer were known by Monsanto and federal officials, but documents show that in 1985, eight members of the Environmental Protection Agency's toxicology branch reversed their classification of glyphosate — Roundup's primary ingredient — as a carcinogen, instead saying it's "not likely to be carcinogenic." The EPA maintains this position.

"The EPA has a long history of rubbing elbows with the companies that they regulate," Carey Gillam, author of The Monsanto Papers: Deadly Secrets, Corporate Corruption, and One Man’s Search for Justice (Island Press, 2021), told Sierra. "The result is, profits get protected, and public health does not."

What regulations exist for GMOs?

In the U.S., any food that is genetically modified needs to be approved by both the EPA and the Food and Drug Administration before it can be commercialized. The Department of Agriculture also plays a role, as its Animal and Plant Health Inspection Service is supposed to make sure that GMOs aren't harmful to other plants. Its Biotechnology Regulatory Services arm then puts those regulations into practice.

For a long time, foods that used GMOs weren't required to have a label disclosing their presence. That changed when former President Barack Obama signed a labeling law directed at grocery store products. The law itself was not necessarily about GMOs or safety but instead about labeling. The result was basically that restaurants, food trucks, and other similar venues don't have to provide labels noting use of GMOs, but grocery stores did. One big caveat? Meat, poultry, and egg products aren't included in the law at all.

The law was criticized for two main reasons. First, it was seen as a pre-emptive move to stop states from developing their own restrictions after Vermont passed a much stricter law in May 2014 that, per NBC News, required foods to say "produced with genetic engineering". In addition, the federal law still allowed labels to be obscure. As NBC News reported, companies could disclose GMO use in plain language on the package itself. But they could also provide a QR code, 1-800 number, or a website for people to visit for more information on the product.

So ... why else are people wary of GMOs?

When it comes to GMOs, there is one other source of concern: their impact on Indigenous sovereignty. As I said above, you can argue that selective breeding is a way of genetically modifying plants — and by that logic, Indigenous people who cultivated corn thousands of years ago made GMOs. However, genetic modification on a small scale, like selective breeding in Indigenous communities, is very different from GMOs put into use by global capitalism.

"Our islands and population are now being used as guinea pigs for the development and release of genetically modified organisms."

A number of Indigenous communities have protested the use of GMOs. For example, in 2005, Le`a Kanehe, then serving as a legal analyst for the Indigenous Peoples Council on Biocolonialism, released a statement against the use of GMOs in Hawaii. "Just as Hawai`i has been used as a sacrifice zone for the U.S. military's bombing and training," Kanehe said, "our islands and population are now being used as guinea pigs for the development and release of genetically modified organisms."

In 2019, Indian Country Today further reported on standing against GMOs as standing for sovereignty. Reporter Darla Antoine wrote that five of the world's largest biotech companies use the Hawaiian Islands to test chemicals and food engineering. As a result, Antoine wrote, "70 different chemicals have been sprayed onto genetically engineered crops during field tests that went undisclosed to the public — meaning the surrounding communities were given no warning nor a chance to protect themselves from exposure through wind, water, or contaminated soil."

Along with concerns about the impact of growing GMOs on the environment, many Indigenous communities worry about how the presence of GMOs alone impacts crops that are culturally important. For example, UNESCO has recognized traditional Mexican cuisine as an Intangible Cultural Heritage, and part of that rests on using native corn products.

In 2013, a coalition of 53 people and non-governmental organizations filed a class action lawsuit to halt genetically modified corn cultivation. Per Impact Fund, the lawsuit claimed that GM corn threatens the diversity and integrity of native corn. This, in turn, not only threatens cultural heritage, but could also mess with low-income farmers, small producers, and others who depend on native corns and their products.

It's clear that GMOs are a complicated topic, even if you focus in on food alone. While GM food may not pose an inevitable immediate risk to people's health, its production certainly can. There may be room for genetically modified food in the future — but maybe only if it is divorced from the capitalist agricultural system as we know it.