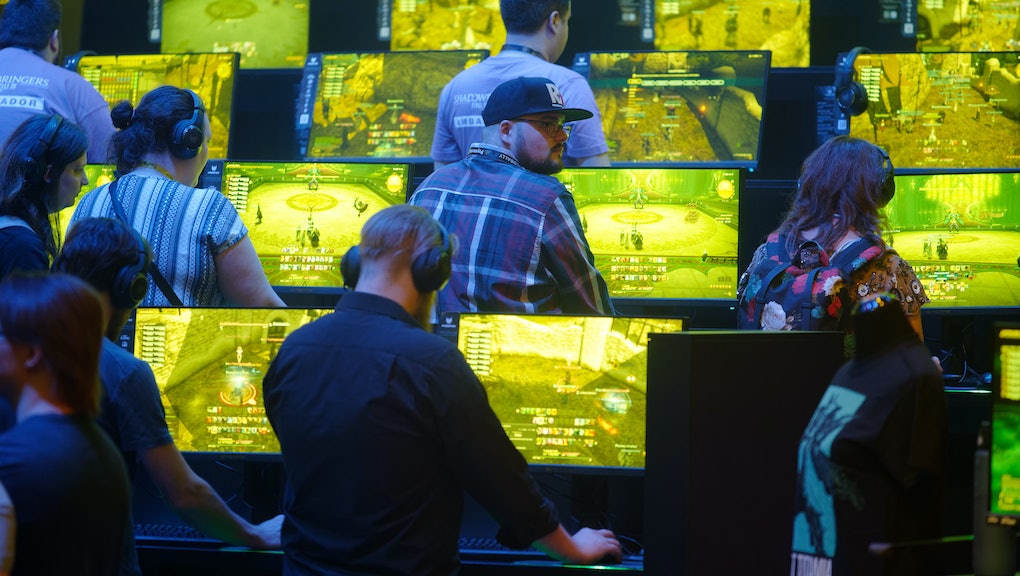 In September 2005, a massive worldwide pandemic broke out, leaving bodies in the streets, and widespread chaos. But you may not have ever heard of it, because it didn’t happen in this world. It happened in World of Warcraft. Players in the game found that their avatars would suddenly start spouting streams of virtual blood before succumbing to a mysterious illness that rapidly swept through the fantasy world. Even the game developers didn’t understand what was happening, or why members of their virtual world kept dropping dead.

Eventually, the mystery was solved: the “corrupted blood” epidemic happened because of a bug in a brand-new raid that the developers had recently debuted. The disease was supposed to be confined to a specific in-game mission, but a minor oversight allowed it to get out and go, well, viral. Users panicked. Some tried to isolate themselves, moving out to the wilderness and away from the densely-populated towns where the disease spread more rapidly. Other users actively spread the disease to others for the sheer joy of wreaking havoc. It took nearly a month for game developers to eradicate the online plague. The plague was so severe and so realistic that epidemiologists now study it to learn how diseases spread.

The parallels between virtual worlds and the real world don't stop there. Neopets famously struggled with hyperinflation of its in-game currency, Neopoints, leading to a wildly unstable online economy that made the game near unplayable for low-level players. Second Life, an immersive and semi-realistic role-playing game, found itself in the middle of a complicated lawsuit after users lost ownership of virtual land. And when The Sims Online debuted, a philosophy professor started a muck-raking newspaper to report on the tawdry goings-on in one of the game’s neighborhoods, Alphaville, which he alleged included an online Mafia and child prostitution.

Over and over, developers seem to find that their online games are more complex and uncontrollable than they imagined. Once problems crop up, they can quickly spiral into chaos for users and developers alike. Online communities can function like laboratories of human behavior. Roleplaying games can model social structures on broad scales in ways that can be very revealing. Gamers may log on to virtual worlds in order to escape their real lives, but it seems that online worlds may be more similar to the real world than they imagine.

World of Warcraft’s online crisis came from a bug in the game itself, and developers were able to resolve the issue once they understood it. Not all crises are solved so easily, however, particularly when they’re generated by the game’s own users. The developers of Second Life initially provided very little interference in the game’s increasingly complex economy, but they were forced to intervene after an in-game Ponzi scheme defrauded users out of $750,000. Ginko Financial, an in-game bank, promised its online depositors interest rates of up to 40 percent, before suddenly vanishing from the game, leaving depositors empty-handed. The game developers, not wanting to get into the messy business of banking regulation, were forced to close all virtual banks in the game that hadn’t been created and backed by actual, real-world banks. The closure of the virtual banks led to a widespread economic crisis in the game, with users suddenly unable to access funds they’d stored in banks that had no federal backing and, indeed, no real-world presence. In an almost prophetic twist, the in-game banking collapse happened just a year before the 2008 financial crisis.

Online games tend to get into difficult territory once they build functioning virtual economies. The problems that plague real-world economies don’t go away when users go online. Brenton Hooper, a data scientist for CCP Games, told Mic that “the parallels [between gaming economies and real-world economies] are scarily similar.”

Hooper would know; EVE Online, an online sci-fi RPG from CCP, has an in-game economy with expansive scope and detail. Gamers play in a massive open universe and can mine resources, refine them, and craft manufactured goods out of those refined materials which they can then sell to other players. Massive, player-run corporations exercise huge production power in the game’s highly complex online economy which boasts one million daily market transactions. Players can even buy in-game insurance policies for their virtual spaceships. CCP treats EVE Online’s in-game economy like it’s real because, in most of the important ways, it functions just like a real economy would. It is possibly one of the most regulated and monitored games online today. The data scientists at CCP closely monitor inflation and commodities prices and regularly post highly detailed reports on the in-game economy. That economy is a crucially important part of EVE Online, and the developers have to balance competing interests when deciding where and when to intervene so the game doesn’t spin out of control.

While they do keep a close eye on the economy, in many situations the developers are hands-off, leaving the players to build their own alliances and even elect their own in-game government. The goods available for purchase in the game are almost entirely manufactured by players themselves with little to no oversight from developers. Scamming and piracy are common and not against the rules of the game. Sometimes, Hooper says, games need a little risk, and a little chaos. Chaos and conflict make games fun and unpredictable, and can open up new strategic opportunities for the players. As things get too civilized and ordered, big alliances may develop that become too powerful for new players to fight against. “So, I think almost paradoxically,” he tells me, “when things get too stable is when we want to jump in and stir things up a little bit.”

So where does all this leave gamers and developers? Are the games they love at risk of spiraling out of control? And how bad would it be if that happened? Many might argue that the impact of any online strife is minimal. After all, if it’s only happening online, is it really happening at all? Surely gamers can just log off if they’re unhappy. But for many players, the games feel real. Players may spend years building up their characters and developing relationships with other gamers.

And games have a troubling way of spilling out into the real world. In an article for Computer Law & Security Review, Clare Chambers, a law professor at UWE Bristol, argues “virtual worlds are not as virtual as one may initially think.” Chambers points out that when in-game currency can be purchased with real-world currency, virtual economies and real-world economies can impact one another, and therefore are not truly separate. In-game weapons and commodities may be sold online for real currency, putting people’s real assets at stake. More troublingly, disputes that originate online sometimes lead to real-life danger for the players involved. Online gaming disputes have escalated into arrests and deadly attacks.

Ultimately, developers must make difficult choices and balance a bevy of competing interests when deciding how to both maintain control and inject the right amount of chaos into their virtual worlds. Online roleplaying games are populated by real people, and while game developers generally have control over every aspect of a game’s environment, the inhabitants are a different story. Developers can hunt down a bug in their code and fix it, but some problems can’t be solved with mere keystrokes. Gamers may go online looking for escapism, but the worlds they escape into seem to differ from the real world only aesthetically – although online worlds may be populated with elves and spaceships, in most other ways, their societies remain strikingly similar to real-world ones. Creating utopias, it turns out, is no easier online than it is in the real world.

More like this
He made a cryptocurrency called SCAM. Now he's trying to make it legit
By AJ Dellinger
The NFT gold rush, explained by the world's first meme manager
By Kara Weisenstein
The ethics of solar power are more complicated than you think
By Vanessa Taylor
Stay up to date