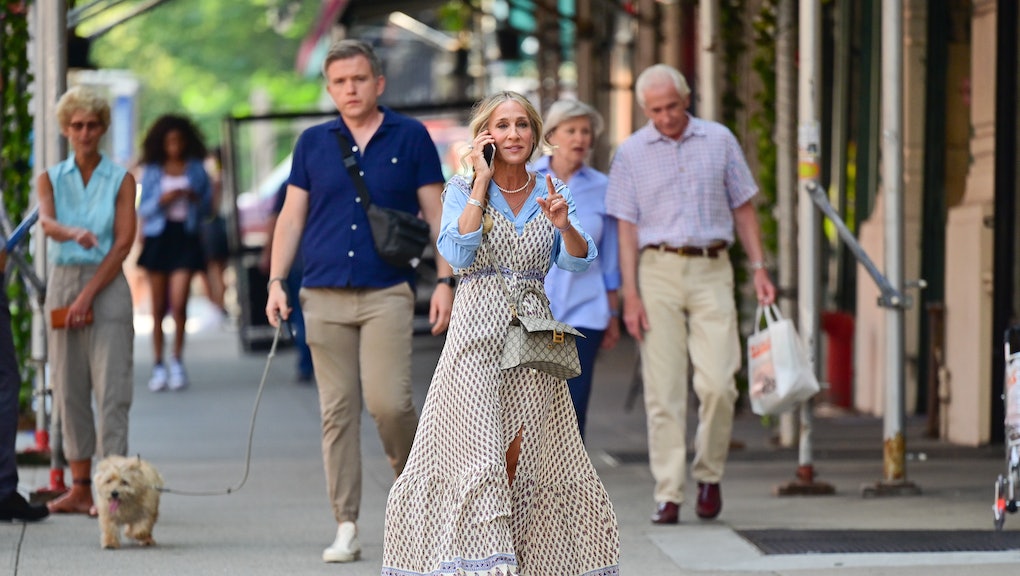 What could possibly explain Carrie Bradshaw shopping at Forever 21?

I've been trying to keep an open mind about the Sex and the City spinoff series And Just Like That..., but they're not making it easy!

I've barely accepted the fact that they forged ahead with a revival without Kim Cattrall, who played beloved sex-positive publicist Samantha Jones. There's no word on how the show plans to address her absence, but if they killed her off, I swear on Smith Jerrod's Absolut Hunk ad, Michael Patrick King will be hearing from me personally.

On top of that — spoiler alert — Page Six reported that a script leak indicates Carrie Bradshaw (Sarah Jessica Parker) and Mr. Big (Chris Noth) are headed towards splitsville... again. Adding to the chaos, John Corbett said he was coming back as Carrie's ex-fiancé Aidan and expected to be in "quite a few" episodes. Honestly, why didn't they name this reboot "Haven't We Seen This?" One big change is that Carrie hosts a podcast now, which, fine, makes sense.

Anyhow, another big and disappointing departure from the original Sex and the City series — which was a landmark in television and fashion history, for the record — is that Patricia Field, the genius costume designer responsible for Carrie's iconoclastic style, isn't involved. It was technically a "scheduling conflict," but Field is working on season two of Emily in Paris instead. Hmmmmmmm. Her friend and protege Molly Rogers is handling the friends' closets instead.

Paparazzi photos of And Just Like That... filming on the streets of New York City have been peppering the tabloids in recent weeks, and devotees of the original show have been picking apart the outfits in anticipation. But some of the fashion has been rather disappointing, unfortunately. Most egregiously, a photo of Parker on set surfaced on Tuesday, and (deep breaths) Carrie is wearing a paisley maxi dress from Forever 21.

Nobody knows exactly why a character who owned a suspiciously large collection of Manolo Blahniks in her 30s (while working as a journalist, ha ha yeah right) would suddenly embrace fast fashion in her 50s. Maybe Carrie is going for a high-low look (she also wore $400 shoes and carried a Gucci x Balenciaga bag). Perhaps she's embracing sustainability by shopping at Beacon's Closet. She could be the victim of a sartorial Benjamin Button situation (you know, since most people only wear Forever 21 when they're very young).

On top of it all, the look in question just...isn't good. Parker is wearing a blue button-down under the bohemian maxi dress, paired with a structured cross-body bag and sparkly blue platform sandals (not stilettos). It's all too busy and discombobulated, and not in the artistically intentional way Field used to style Carrie. Unless there's some narrative explanation afoot, this new look is a bummer.

I couldn't help but wonder... will the SATC reboot have any redeeming qualities?