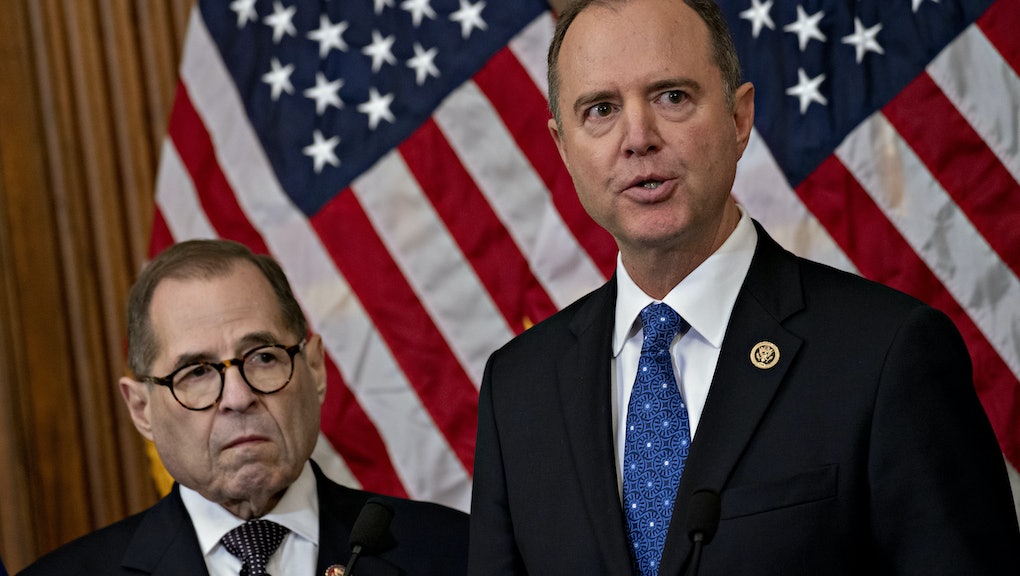 What exactly is an impeachment manager?

Update Feb. 9, 2021: This article was originally published ahead of former President Donald Trump's first impeachment trial, in early 2020. Trump was impeached for the second time on Jan. 13, 2021, after the Jan. 6 riot at the U.S. Capitol. He was charged with inciting an insurrection against the U.S. government. His second trial began Feb. 9, 2021.

Impeachment is many things — a sentiment, a protest, a rallying call, maybe even a mood. But it's also a dense legal and bureaucratic process, which means it requires managers. This week, House Speaker Nancy Pelosi will choose between four and 10 official impeachment managers to carry out the nuts and bolts of actually running the show, presenting evidence, and questioning witnesses (if they are allowed to appear). If the senators will act as the trial’s jury, with Chief Justice John Roberts as the judge, then the managers will serve as something approximating the prosecution. They will be drawn from the House, in particular the House Judiciary and Intelligence Committees, which played a key role in investigating the president.

But what are impeachment managers, and what do they do? Here's a brief rundown.

What do impeachment managers do?

Impeachment managers have a pretty simple job description: They manage impeachment. But what that actually entails is quite complex. Their job begins with physically carrying the articles of impeachment from the House over to the Senate and presenting them officially — an archaic bit of congressional procedure.

After that, the impeachment managers will present their arguments in opening and closing statements, as well as make the case for the individual articles of impeachment, discussing the evidence behind each one. If there are witnesses, the impeachment managers will be the ones responsible for interrogating them. This is a big deal for congressmen, who are almost never given the opportunity to speak in front of the Senate.

It's helpful to remember that the impeachment of a president is technically a trial that's taking place in the Senate. The articles of impeachment are the charges being levied against the president, who is the defendant, and the possible outcomes are acquittal or conviction. In this context, the impeachment managers are akin to the lawyers prosecuting the case.

Who are some previous impeachment managers?

This will be the third impeachment trial ever, following those against Presidents Andrew Johnson in 1868 and Bill Clinton in 1999. At Johnson’s trial, the seven Republicans serving as the House's impeachment committee spent more than two months trying and ultimately failing to earn a conviction against the president.

More than a century later, in 1999, 13 Republicans worked as impeachment managers in the case against Clinton. Three of them are still elected officials today — Reps. Steve Chabot (Ohio) and Jim Sensenbrenner (Wis.), along with the powerful South Carolina Sen. Lindsey Graham, who was then a congressman from South Carolina.

In an interview with The New York Times over the weekend, Sensenbrenner discussed the task facing his colleagues across the aisle. “I really don’t want to give them any advice,” Sensenbrenner said. “But I guess I can say is that this is going to be a lot more work than you think. The American people are going to be watching.”

Notably, another one of the 1999 managers was a Republican representative from California named James Logan. In the next election, he lost to Democrat Adam Schiff — now the chairman of the House Intelligence Committee, who led Trump’s impeachment proceedings in the House.

Who might be named impeachment managers in Trump's trial?

The rules over the impeachment trial have yet to be publicly established, with both sides wrangling over whether or not additional witnesses will be called in addition to other procedural rules. Pelosi has waited to decide on the managers until she knows more about the "arena" that Senate Majority Leader Mitch McConnell will be creating for the trial, saying she wants to be able to choose managers who will be best suited to the task at hand — whether that ends up being interviewing witnesses or delivering rhetoric without them. But after a weeks-long standoff, she's told her caucus that she'll deliver the impeachment articles to the Senate on Wednesday, and that they'll plan to name managers Wednesday as well.

While there's still much unknown, a few things seem clear. The impeachment manager team will almost certainly include Schiff and New York Rep. Jerry Nadler, the chairman of the House Judiciary Committee, as the two have been the two most prominent public faces of impeachment in the House so far (aside from Pelosi). Also, the managers this time around will almost certainly differ in a key way from the team of 13 white men who prosecuted Clinton. Pelosi runs a very diverse caucus, and showcasing that diversity will likely be a priority for her as she seeks to get the American people on her side.

Recently, Democratic Rep. Dean Phillips (Minn.) argued that Pelosi should name the Michigan Rep. Justin Amash, the independent who split from the GOP last year, to be one of the managers. Whether this will actually happen is anyone’s guess, but the image of a former GOP mainstay arguing with his estranged party to impeach their president is certainly a vivid one to ponder. McConnell has said he expects the trial to begin next Tuesday, giving us about a week to let our imaginations run wild.

This article was originally published on Jan. 14, 2020