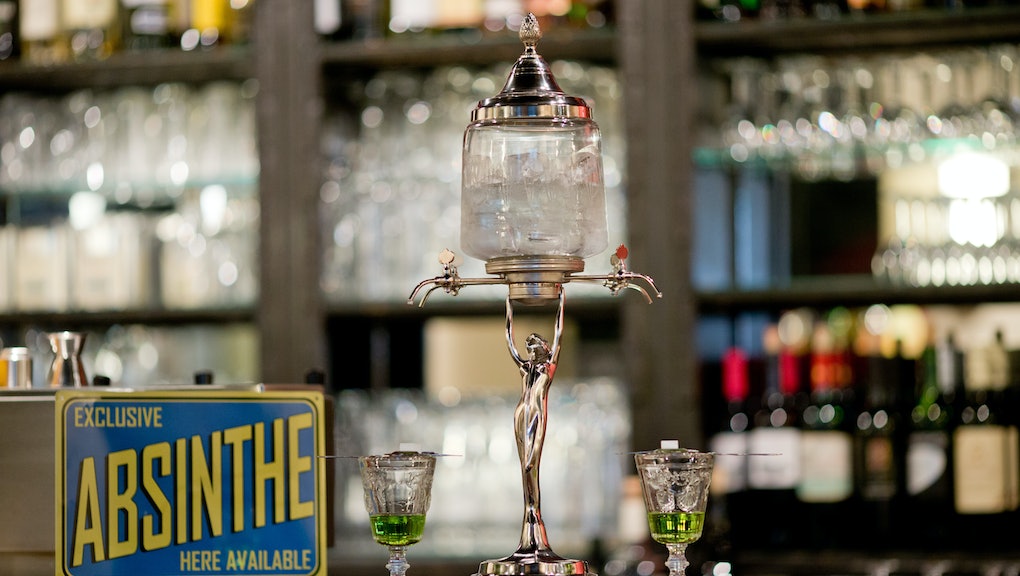 What is absinthe and why was it banned for 100 years? A mystery as murky as the alcohol itself

There are few beverages as intriguing as absinthe. The alcohol — which was hugely popular in the late 19th century — was banned in the U.S. and much of Europe until relatively recently, and the "green fairy" still carries with it an air of mystery. Today, you can easily get your hands on a bottle of the liqueur, but before you do, it's worth learning a bit more about it.

So what is absinthe, and why was it once deemed so dangerous that people weren't even allowed to buy it? Absinthe is a grain alcohol of Swiss origin that is made by macerating herbs and spices, the most important of which are fennel, anise, and wormwood. The first two give absinthe its characteristic licorice taste, while wormwood imparts a bitter flavor and is the source of absinthe’s famed mystique and jade-green hue.

In the U.S., absinthe alcohol is regulated by the Food and Drug Administration, and the reason it was banned for so long has to do with one particular ingredient. Absinthe contains thujone, a chemical found in several edible plants — including tarragon, sage, and wormwood. But why is thujone so dangerous that its presence in your glass of booze needs to be regulated by the FDA? The answer has more to do with history than science.

Prior to the ban in the early 1900s, absinthe was ubiquitous. If you check out a list of famous people who drank absinthe, you’ll notice that there’s a lot of them, including Vincent Van Gogh, Oscar Wilde, and Ernest Hemingway. That’s because basically everyone who was cool between 1850 and 1900 was an absinthe fan. Being both the latest fad in booze and extremely high in alcohol content, absinthe was sometimes to blame for bouts of raging drunkenness, occasional delirium, and even death — kind of like Four Loko in the late aughts.

As its popularity spread, incidents of absinthe-related alcohol abuse did as well. Society gradually came to associate absinthe with alcoholism and degeneracy in general, and a French psychiatrist named Dr. Valentin Magnan even went so far as to blame absinthe for what he saw as a collapse of French culture.

Magnan set out to prove that absinthe was the root of French society’s ills. He conducted all sorts of scientific experiments on animals using thujone and wormwood oil, and he observed that mice that ingested high concentrations of thujone experienced convulsions and died. He even gave a dog a vial of wormwood oil and watched it go crazy and bark at a brick wall for half an hour. (This experiment, by the way, is the root of the myth that absinthe causes hallucinations. It doesn’t.)

These and other experiments seemed to confirm the widely-held belief of the day: Absinthe caused people to go crazy. It became common knowledge that wormwood had madness-inducing and psychoactive powers.

Combined with the evidence produced by Magnan, the crime was added to the narrative of the Temperance Movement (also known as the Prohibition Movement) which advocated a ban on absinthe. By the early 1900s, the spirit was banned in most of Europe and the United States. The bans persisted for over 100 years.

We now know that the toxic effects of thujone were greatly exaggerated. An average-sized adult male would have to consume about 30mg of thujone in order to feel those effects, which include tunnel vision, tremors, and delayed reaction time — all of which are similar to other toxic chemicals, e.g. alcohol.

While Magnan’s experiments relied on high doses of pure wormwood oil and thujone, there isn’t actually that much thujone in absinthe alcohol. Gas chromatography tests on vintage absinthe bottles produced in the 19th century revealed average thujone levels of 25mg/L. Some had levels as low as .5mg/L. Today, thujone levels in absinthe are capped at 10mg/L in the United States, and 38mg/L in Europe. That means, according to The Wormwood Society, you would die of alcohol poisoning before you consumed enough absinthe to be poisoned by 30mg of thujone. This was true even in Magnan’s time.

It makes one wonder about the way we regulate scary chemicals. Thujone, like any other natural or artificial chemical, is only toxic at certain levels. The National Toxicology Program regularly produces the “Report on Carcinogens” which is currently in its 14th edition. The science behind this report frequently relies on experiments in which high doses of chemicals are administered repeatedly to rodents. When these experiments, like Magnan’s, are understood in the context of preexisting societal fears, we shouldn’t be surprised by regulations that are out of all proportion to the threat posed by the chemicals.

This article was originally published on June 22, 2013