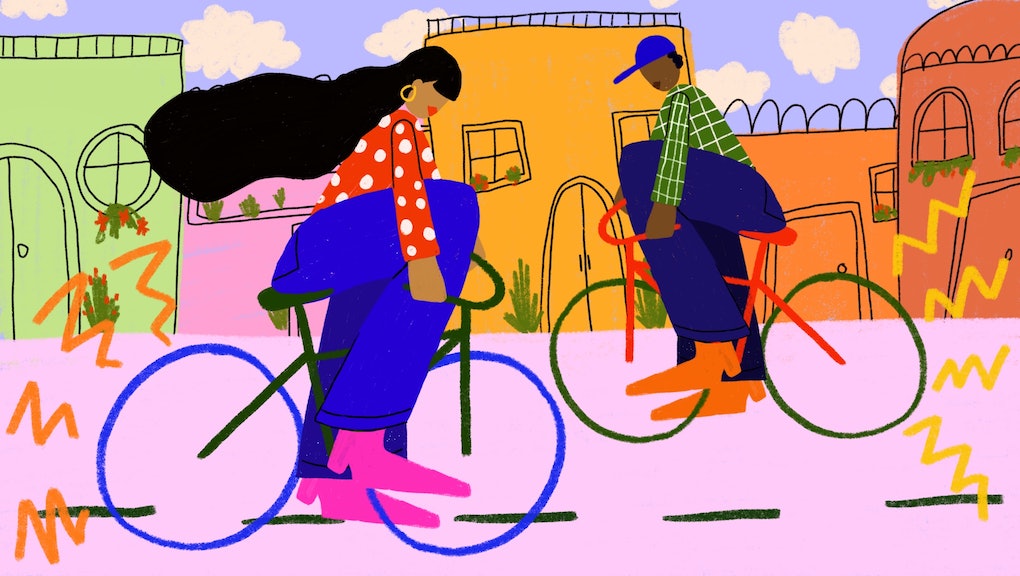 What is an e-bike and should I get one?

There’s a guy that cruises up and down my street every day on a sleek, fast-moving, mint-hued bike that for the longest time I thought was simply a traditional bicycle with an attached motor. I even credited him with a newfangled invention that I wish I had thought of first. Yeah, I guess I missed the memo on electric bikes.

One afternoon, I had a chance to talk to this e-bike-riding man after he had paused at the corner one day to adjust his seat. “Tell me about your bike!” I said. Turns out Mike — yes, he has a name — said his e-bike was the best purchase he ever made. “I even sold my car,” he said, grinning.

The fact that he went all in on this thing piqued my curiosity even further. What is an e-bike exactly? Aaron Powell, founder and CEO of Bunch Bike, which specializes in front-load electric cargo bikes, broke it down for me: “An e-bike is a bicycle with an integrated motor that allows you to ride farther, faster, and easier than you could do with leg-power alone.” Sounds cool, right? If you’re thinking of buying one, here’s everything you’ll want to consider.

What do I need to know about e-bikes?

So, it’s clear that the gist of an e-bike is that it offers some form of assistance to a rider in moving a bike forward, right? But there’s a bit more to understand if you are considering investing in them, starting with the different types of e-bikes, says Amanda Botton, spokesperson for Crooze, an Australia-based e-bike retailer.

“There are different types of e-bikes depending on your riding style,” Botton says. “The most popular types of electric bicycles include urban bikes, mountain bikes, road bikes, and city/folding bikes.”

Depending on the type you choose, an e-bike can travel 37 to 43 miles (60 to 70 kilometers) before you need to charge it up again, and a speed of up to 15 to 28 miles (25 to 45 kilometers) per hour, Button explains. But just because the bike can achieve that speed, doesn’t mean it’s legal. In the United States, the maximum speed allowed is 20 miles per hour.

E-bikes generally run in three standard modes: Pedal-only, pedal-assist, and electric-only, all of which are exactly as they sound. (Read: You can ride an e-bike like a normal bike, get a little boost from pedal assist, or cruise without any work at all.)

“On e-bikes with pedal assist, the motor will automatically turn on and adjust power output as you ride,” Powell explains. “Some e-bikes have a throttle on the handlebars that will allow you to manually control the motor, both with and without pedaling.” One popular model? The Charge City Electric Bike, which features a push-button throttle that allows you to work a little less hard on days you don’t feel like breaking a sweat.

Okay, but why would you buy an e-bike when you can pedal it out old school for a fraction of the cost? Will Henry, the founder of Bike Smarts, an all-things-cycling website, says there are significant benefits. “The first is the charge time drastically cut, so you're now able to get many dependable miles in between charging while on a long commute or extended bike ride,” he notes. Another benefit? “They are also much lighter weight than traditional bikes and easier to mount, which means that they are great for both men and women who carry luggage or have mobility challenges.”

What are the different types of e-bikes?

Bonus if you have a hub motor: They require little or no maintenance. “The hub motor and the pedal drive system are completely independent, meaning you can lose the chain and still be able to ride home on just the electric power,” Botton says. There is a downside to hub motors, however, and it comes in the form of a single gear ratio, Botton notes. This means that while flat road riding at a lower speed won’t be a problem, hill climbing is going to require an e-bike with higher torque gear.

That’s where mid-drive motors come in, offering a more balanced ride as you pedal, according to Botton. “The biggest advantage with mid-motors over hub motors is their gear ratio,” she notes. “It enables the rider to power the back wheel via the same chain and gear set as the pedals, which means that a low gear is available for steep up-hills or accelerating from stand-still with massive torque.”

Of course, like anything, even mid-drive motors come with a few cons, including the fact that they can be a bit “harsh on your drive system,” Botton says, which is why snapped chains are probably the most frequent maintenance issue on mid-drive e-bikes.

More like this
Castor oil for hair growth: Does it actually work?
By Melissa Pandika
Should I wear sunscreen indoors?
By Caroline Shannon-Karasik
Wanting to start a family motivated us to pay off $126K in a year
By Marianne Eloise
Stay up to date