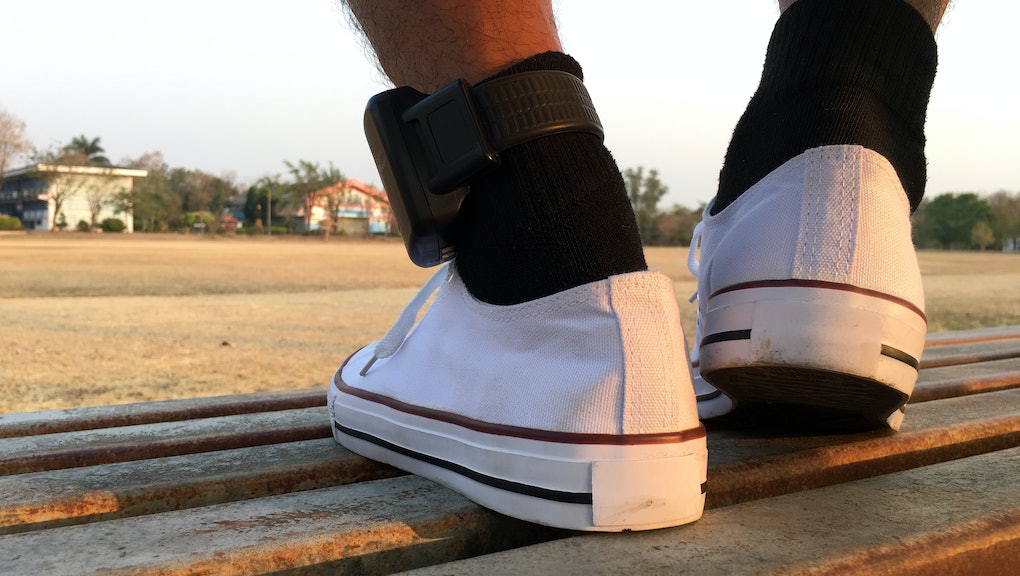 As a country, the United States heavily relies on incarceration to deal with just about any issue. From jails and prisons to immigration and juvenile detention centers, confining people in physical spaces, like cells, is commonplace in America. In fact, the U.S. incarcerates more people than any other country in the world with over 2 million people in prison alone.

Not only that, but new technologies are expanding incarceration even beyond prison walls. The cells that represent incarceration in many people's minds are being replaced by alternative methods. Rather than send people off to various facilities or rely on old pre-trial detention models like cash bail, the U.S. is turning to ankle monitors, apps, and more — all methods of confinement known collectively as e-carceration.

In 2016, a Pew Charitable Trust report found that the number of people monitored with ankle bracelets and other electronic tracking devices rose by almost 140% over 10 years. Despite its rising popularity, e-carceration remains mostly unknown or misunderstood by the general public.

On the surface, getting a monitor slapped on your ankle sounds a whole lot better than sitting in a jail cell — except the pandemic should have shown us that being stuck in your house all day can have detrimental effects on your mental and physical health. And if you feel like daily Zoom calls are invasive, consider that ankle monitors do way more than track your location. They can listen in on your calls and record you without you knowing.

Sounds horrific, right? That's not even the worst of it. Let's break down e-carceration.

Part of the problem surrounding e-carceration is that most people don't know what the heck it refers to. Ankle monitors and house arrest are the most obvious examples, but they don't encompass everything. Instead, Challenging E-Carceration, a project hosted by the Center for Media Justice and the Urbana-Champaign Independent Media Center, defines e-carceration as "the use of technology to deprive people of their liberty."

This is a useful definition because it draws attention to how e-carceration can harm people who may not consider themselves to be its targets. For example, you may think that e-carceration doesn't affect you because you haven't been arrested. However, Challenging E-Carceration considers surveillance technologies, like license plate readers and facial recognition software, as examples of e-carceration, too.

Who pays for e-carceration?

The Bureau of Justice Statistics, a division of the U.S. Justice Department, says that this country spends over $80 billion each year to incarcerate about 2.3 million people, per The Marshall Project. However, organizations like the Prison Policy Initiative say that figure only addresses the cost of running the corrections system. It doesn't include policing costs, court costs, or the money that families spend while someone is incarcerated. The PPI argues a more accurate total cost of incarceration in the U.S. is about $182 billion each year.

Either way, incarceration is costly, and e-carceration is no exception. There's no single total for how much e-carceration costs, mostly because it's so broad. If you're looking at license plate readers as a form of e-carceration, those can cost anywhere from $15,000 to $20,000 each.

For an easily recognizable example, let's hone in on ankle monitors. Equal Justice Under Law, a nonprofit law organization, said people who get ankle monitors usually have to pay an installation fee (between $175 to $200) and daily monitoring fees (from $5 to $40). Now remember, some people have to wear ankle monitors for years. And when people cannot afford ankle monitor fees, taxpayers pick up the leftover bill. Equal Justice Under Law stated that in South Carolina, taxpayers pick up a $3.5 million tab from uncollected fees. And that's just one state.

Why is e-carceration a problem?

In some cases, people argue that e-carceration is more humane than traditional methods of incarceration. However, this is far from the case. As mentioned above, the fees associated with forms of e-carceration like ankle monitors can easily drive people into debt. Remember, ankle monitors are often used as a form of pre-trial detention to replace cash bail, so people wearing them would typically otherwise be in jail. According to Bureau of Justice Statistics data reviewed by the PPI, people in jail had a median income of $15,109 (in 2015 dollars, adjusted for inflation from the reporting date) before being incarcerated — less than half of the median income for non-incarcerated people of similar ages.

However, going into debt isn't the only issue with ankle monitor fees. James Kilgore, the project director of Challenging E-Carceration, wrote that he once connected with a man who was on house arrest and could not afford his fees. So, Kilgore said, "The [federal] probation folks added a new twist to debtor's prison — they wouldn't let him out of the house for his mental health appointments until he paid his [electronic monitoring] fees. Even a letter from his therapist to the probation officer didn't yield a response."

E-carceration doesn't do away with any of the pre-existing disparities embedded within carceral systems. Instead, it finds ways to amplify them.

In addition to all that, the use of electronic monitoring as a form of e-carceration remains mostly unchecked. As the Electronic Frontier Foundation noted, there aren't many regulations around the data these devices provide — including who can access it, how long it should be kept for, and how it should be able to be used. With that in mind, it's not surprising to hear that in Chicago, a city infamous for its flawed law enforcement, juveniles were made to wear ankle monitors with microphones that could call and record them without their consent.

Now, what happens to all the data that ankle monitors collect? EFF noted that companies that contract with law enforcement for electronic monitoring can often store and sell data on people. This is not only a problem for the individual being monitored, but also for anyone that they've socialized or come into contact with. But remember: E-carceration isn't limited to ankle monitors or the criminal justice system. For example, Immigrations and Customs Enforcement heavily relies on other forms of surveillance technologies, like DNA databases, which have come under intense scrutiny.

Perhaps most importantly, e-carceration also doesn't do away with any of the pre-existing disparities embedded within carceral systems. Instead, it finds ways to amplify them, as evidenced by the fact that Black people are twice as likely to be under electronic monitoring than white people. This system builds on the legacy of surveilling and controlling the movements of Black people, and reverberates that harm into communities across the country.