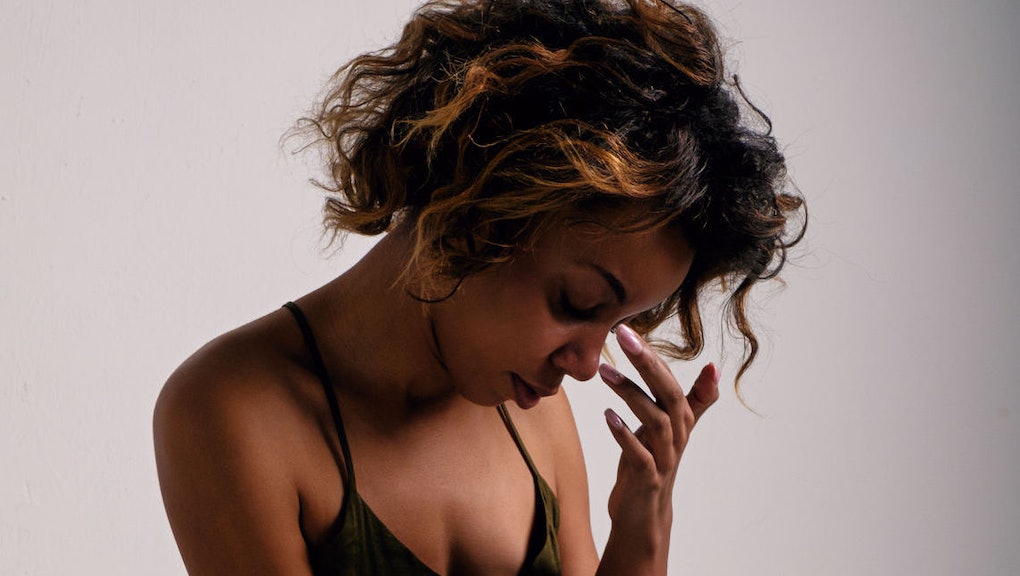 What is Echoism? A psychologist tells us about how some people really hate being praised

Imagine this scenario: You land a fantastic new job and friends want to celebrate by throwing a dinner party, but the thought of receiving positive attention makes your stomach churn — not because you have social anxiety — but because you’re terrified of being in the limelight. Not only do you bristle every time a compliment comes your way, but you also always downplay your success. Because you worry about saddling others with your problems, you never seek advice, even when a potential partner you’re excited about ghosts you, or when family stress brings on insomnia. Friends and co-workers have always encouraged you to speak up more about your feelings, but you’re terrified that if you do, you'll come across as narcissistic and selfish.

While this might sound a lot like a potent form of passiveness, mental health professionals have found that an inability to accept compliments, state one’s preferences in relationships, and reach out for help, may be signs of a personality trait known as echoism. As a psychologist, I’ve encountered clients with this trait in my office — some are aware of their aversion to praise and some aren’t.

According to psychologist Dr. Craig Malkin, an echoist researcher and author of Rethinking Narcissism, echoism is an “extreme fear of seeming narcissistic in any way.” In contrast to the attention-grabbing narcissist who craves feeling special, echoists fear special attention — even when it’s positive. Malkin and his colleagues have found that echoists tend to agree with statements such as “I'm afraid of becoming a burden,” and “When people ask me my preferences, I’m often at a loss.” While these traits might sound a lot like run-of-the-mill people-pleasing behavior or even humility, Malkin says there’s a big difference.

“One client of mine is so averse to attention, she becomes angry when others try to lend a hand,” he says. Instead of accepting help from someone with genuine intentions, she snaps back with, “I don’t need you making a fuss over me,” Malkin says. As it turns out, all people-pleasers may be echoists, but not all echoists are people-pleasers.

What echoists lack — the thing that pushes them past just wanting to be liked — is a “painful absence of being,” as psychotherapist and echoism researcher, Donna Christina Savery calls it. In her book, Echoism: The Silenced Response to Narcissism, Savery says echoism often results from growing up with a narcissistic parent. “Echoists are often quiet, unable to take up space, or are likely to adapt themselves to the perceived wishes of others,” she writes.

So how does a narcissistic parent affect a kid in this way? Echoists tend to come from families where disagreeing and expressing feelings such as anger, sadness, and disappointment was off-limits. Also, they might have been shunned for owning their achievements. Much of the time, this parent/child dynamic stems from the parent’s own unresolved trauma that’s never been worked through. In some cases, an emotionally fragile parent — one who burst into tears at the first sign of adversity — may have caused the child to fear seeming 'too needy,' Malkin says. It can get even more complex: As a result of this dynamic, echoists can fear developing a separate identity, because doing so means leaving the needy parent behind.

Still, it’s important to note that not all children with narcissistic parents become echoists, and not all echoists have ego-driven caregivers. “Echoism is a trait that exists to some extent in all of us," says Malkin.

In their adult lives, echoists often live by the mantra, “the less room I take up, the better,” says Malkin. This irrational belief can lead them to form relationships with 'larger than life’ personalities — people who take up a lot of the conversational space. Think of it as a very classic “opposites attract” situation. In extreme circumstances, echoists may find themselves in emotionally controlling relationships where their needs and feelings are repeatedly invalidated, shamed, and erased.

Because I’ve specialized in women’s health, I’ve counseled many women who believe that asking for more in relationships and asserting themselves is dangerous, because an emotionally abusive parent made it unsafe for them to speak up. But here’s part of the greater problem: Adapting in social situations and constantly pleasing others is often seen positively, which can lead them to believe they’ve escaped their painful childhoods unscathed. However, the opposite is true: Some of these people learn to survive by erasing their needs and feelings.

Part of what therapy offers, in this case, is the chance to explore these painful feelings and memories in a safe, supportive space, and to finally hear someone say that the childhood trauma was not ‘normal.’ And while there’s no data to support that echoists are most often women, in my clinical experience, it seems that women struggle with these traits more than men do.

Feeling uncomfortable with any amount of attention can take a toll on the echoist’s mental health, causing them to feel anxious and depressed. “They see themselves — and the world — in a slightly dimmer light,” Malkin shares. However, unlike Narcissistic Personality Disorder, which is a psychiatric diagnosis, echoism is not a mental illness, which means not all psychotherapists are familiar with this personality trait. Because of this, mental health professionals are only beginning to realize that extreme people-pleasing behaviors, discomfort receiving praise, and uneasiness talking about oneself doesn't always reflect internalized gender roles, but could be signs of echoism.

Malkin says that the key to helping echoists is encouraging them to express their feelings even if they're negative. If a person close to . you exhibits these behaviors, let them know that it’s OK to disagree with you and that doing so won’t ruin your relationship.

In addition to therapy, Malkin adds that finding one special person who has your back, no matter what, can foster attachment security. When this happens, echoists no longer need to silence their own voice.

“The more securely attached people become, the less need they have for echoism," he says.

More like this
Having a bad trip? This hotline can help you find your chill
By Melissa Pandika
This COVID-19 long-haul symptom is another reason we all need to get vaccinated
By Tracey Anne Duncan
We don't trust our tap water — and it's a big problem
By Asher Rosinger
Stay up to date