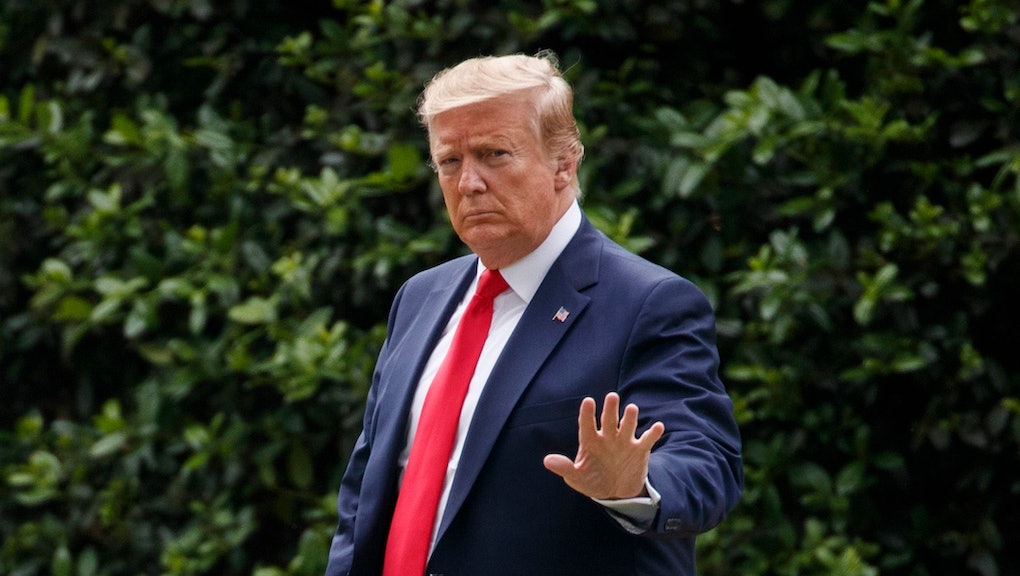 What is executive privilege? How it's being invoked — and misused — by the Trump administration

As Congress moves forward with an impeachment inquiry against President Trump, more and more of his staff will be brought to Capitol Hill to testify before House investigators. That means, undoubtedly, that many of them will make claims that “executive privilege” protects them from having to answer certain questions posed to them by lawmakers. And in keeping with the Trump administration’s refusal to cooperate with the rest of the federal government throughout its tenure, White House Counsel Pat Cipollone sent a letter to high-ranking House members, including Speaker Nancy Pelosi, earlier this month stating that the president and his administration “cannot participate” in the impeachment inquiry because it is “partisan and unconstitutional.”

So, what exactly is executive privilege? And is it really a magic wand government officials can wave to get out of answering uncomfortable questions? We've broken it down for you below.

What is executive privilege?

Simply put, it protects the president (a.k.a. the executive) from having to publicly share private communications and documents. In limited cases, it allows the White House to refuse to comply with subpoenas or other official information requests from Congress or the judiciary.

How has executive privilege been used by the Trump administration?

The Trump White House has a long record of using claims of executive privilege to evade congressional questioning. Most recently, on Oct. 14, the administration attempted to use executive privilege to limit the testimony of Fiona Hill, former Trump aide on European and Russian affairs, who was called to speak with House impeachment investigators about the president’s dealings with Ukraine. However, Hill’s lawyers responded with an argument that executive privilege doesn’t apply in this case — first and foremost because the Supreme Court has ruled that the statute is trumped by official inquiries into government misconduct.

Prior to the impeachment inquiry, the Trump administration claimed executive privilege in response to Congress and Special Counsel Robert Mueller’s investigation into Russian interference in the 2016 election. In January 2018, Trump’s former chief strategist Stephen Bannon refused to answer the House Intelligence Committee’s questions about the presidential transition, claiming he was protected by executive privilege. Months earlier, former Attorney General Jeff Sessions also claimed executive privilege gave him an excuse to withhold answers from Congress in the same investigation.

So what's wrong with how they're invoking executive privilege?

It appears that members of the Trump administration are drastically overstating the scope of protections offered by executive privilege. On Oct. 11, the district court in Washington, D.C., made the first decision specifically pertaining to Trump’s claims of executive privilege, ruling that the administration could not use the provision to block one of his accounting firms from providing the financial records demanded by Congress’ subpoena.

What does history say about executive privilege?

The most famous case of a president invoking executive privilege was Richard Nixon in 1974 — and it did not work out for him. In United States v. Nixon, the Supreme Court unanimously ruled that, while the court’s “interest in preserving confidentiality is weighty indeed and entitled to great respect,” in the course of investigations, “when the ground for asserting privilege as to subpoenaed materials sought for use in a criminal trial is based only on the generalized interest in confidentiality, it cannot prevail over the fundamental demands of due process of law in the fair administration of criminal justice.”

In other words, when it comes to investigations into governmental misconduct, demands for evidence needed to properly conduct the investigation usually override invocations of executive privilege. If there is a compelling reason executive privilege is invoked for specific materials, such as protection of national security, the courts may be more likely to uphold its invocation. But in the Nixon case, the court made clear that this privilege is nullified when it comes to evidence that could prove governmental misconduct.

With the Nixon ruling, the court created legal precedent regarding the most commonly invoked type of executive privilege, which provides privacy for the president’s confidential communications. The justices posited that this protection is provided by the Constitution’s mandate of “separation of powers,” but as University of Missouri Law Professor Frank Bowman told Reuters, in the course of an impeachment inquiry, “virtually no part of a president’s duties or behavior is exempt from scrutiny.”

A second type of executive privilege, which the courts have found even more limited in strength, protects the executive branch from having to reveal its “deliberative process.” This means that a presidential administration can withhold documents that reveal how it makes decisions on issues of political significance. A 1997 D.C. district court ruling by Judge Patricia Wald found that the executive branch has the right to privacy on “final and post-decisional materials as well as pre-deliberative ones.” This part of the policy provides more cover for officials to claim executive privilege, as it could potentially cover staff communications on decisions made by the entire executive branch rather than just the president. Again, though, the Supreme Court ruled in the Nixon case that this privilege “disappears altogether when there is any reason to believe government misconduct occurred.”

What can lawmakers do to combat Trump's use of executive privilege?

Regardless of whether the Trump administration is claiming executive privilege by asserting a right to privacy in presidential communications or deliberative processes, it appears clear that officials are misusing the policy. If the administration continues to invoke the policy to evade the impeachment inquiry, a committee in the House or Senate can vote to hold the president in contempt of Congress, and then take the case to court in order to seek a judge’s ruling to force compliance.

And as long as the courts continue to uphold legal norms, court precedent is against the White House. The Supreme Court has already unequivocally stated that when it comes to government misconduct — which is clearly the subject of the impeachment inquiry — invocations of executive privilege are overruled by the “fundamental demands of due process of law in the fair administration of criminal justice.”