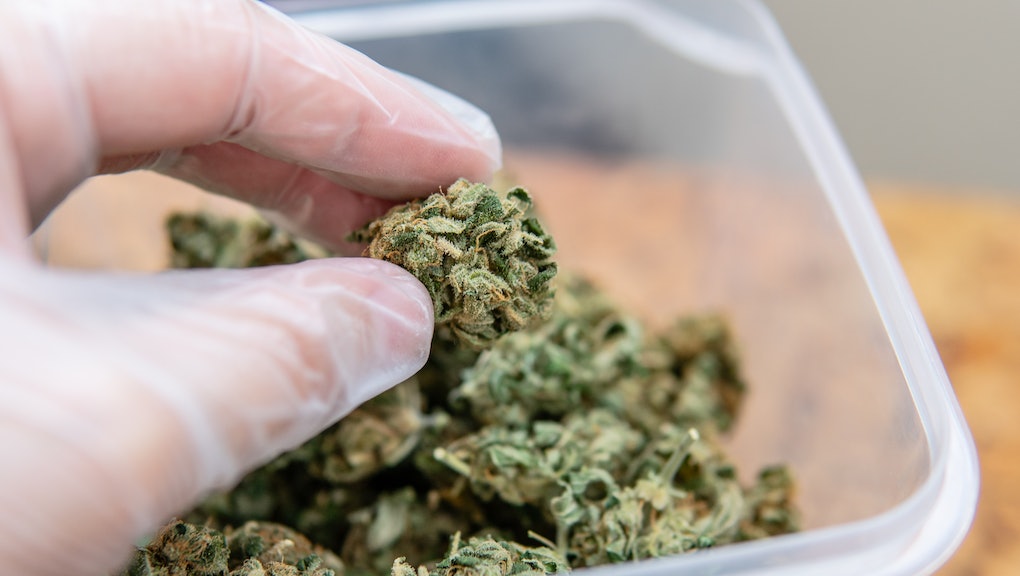 What is THCV and can it really curb the munchies?

It hits every cannabis user at some point: the munchies, that all-consuming hunger for sugary, salty, greasy goodness — the kind that leaves you shoving your face with a microwave quesadilla as you binge-watch Tiger King. To avoid this regret-inducing side effect, folks have been turning to strains supposedly high in a compound called tetrahydrocannabivarin, or THCV. Nicknamed “the sports car of weed” and “skinny pot,” it purportedly delivers an energizing high, sans the cravings. But we all know the weed world is full of myths and promises, so I got some trustworthy experts to answer my burning questions: What exactly is THCV and can it truly curb the munchies?

THCV belongs to a class of compounds present in weed known as cannabinoids. You’ve probably already heard of two of them: tetrahydrocannabinol, or THC, which gets you high; as well as cannabidiol, or CBD, which is non-inebriating but supposedly helps you find your chill. Cannabinoids act on proteins known as cannabinoid receptors. The one usually connected to the munchies, CB1, has shown activity in the brain’s reward center, the stomach and intestinal tissue, and other regions known to trigger eating, per the Alcohol & Drug Abuse Institute at the University of Washington.

THC activates CB1, Matthew Hill, associate professor of cell biology and anatomy at the University of Calgary, tells Mic. THCV, on the other hand, blocks CB1 — but whether that means it can keep the munchies at bay remains unclear.

Hill cites one study in which THCV reduced food intake and weight in mice. But a study in humans saw that THCV increased neural responses to both rewarding and aversive stimuli (such as a picture of chocolate versus a picture of moldy strawberries) in certain brain regions, suggesting it had a “subtle effect on how the brain processed the environment,” he notes. Another study showed that THCV altered brain activity in humans. And neither of these human studies found it to be intoxicating. “I don’t think THCV gets you high,” Hill says. Wamp Wamp.

Meanwhile, research by GW Pharmaceuticals (the company behind the CBD drug Epidiolex) on the use of THCV to treat type 2 diabetes and similar metabolic disorders stalled at a phase II clinical trial in 2016, VICE reports.

“In general, I think the idea that [THCV] reduces your appetite, helps you lose weight, and helps you regulate glucose is very poorly supported,” says Lewis Nelson, professor and chair of the department of emergency medicine and chief of the division of medical toxicology at Rutgers New Jersey Medical School.

The problem is, much of our understanding of the effects of cannabinoids comes from research in cells and animals, Hill says. Ideally, researchers would run a clinical trial, assigning one group of people to take THCV and the other, a placebo, to take into account anything other than THCV that could affect the results, Nelson explains. To avoid bias, neither participants nor researchers would know who got which treatment, until after the trial. The researchers would then observe the participants' appetite, weight change, or other factors THCV purportedly affects.

But regulatory hurdles make conducting clinical trials of cannabis extremely difficult, Hill says, even in his home country of Canada, which legalized recreational use in 2018. In the US, the federally illegal status of cannabis remains the main hurdle. Funding is another challenge. It’s hard to make money off a plant, unless, say, you pull a GW and patent a pharmaceutical formulation of cannabis, Hill tells Mic. And there isn’t an entity that financially supports clinical research on cannabis.

That said, “it’s certainly possible” that THCV has the effects it’s purported to have, Hill says. We just don’t have data from rigorous, controlled clinical trials to prove it. Instead, people making claims about THCV have “extrapolated from this chemical’s effects on its receptor” and generalized it to the human body, Nelson says. “That is not science. That is marketing.

Sure, some people might report high-THCV strains to be uplifting and appetite-suppressing. But Hill points out that even expecting that a strain will make you feel a certain way can very well nudge you toward perceiving it as such.

Plus, it's hard to know whether the high-THCV strains touted by weed connoisseurs even contain high levels of the cannabinoid. Finding high-THCV strains can be tricky. Descriptions of cannabis strains typically list only their THC and CBD content. "As far as I know, THCV is not part of the standard analytics done for cannabis," Hill says.

A few strains have been cited as high in THCV, such as Durban Poison, Jack the Ripper, and Doug's Varin, which all apparently contain around 1% to 5% THCV, according to Weedmaps. A strain is basically the genetic makeup of cannabis, and each has varying levels of compounds like THC and CBD. Here's the thing, though: The use of strains as a classification system doesn't seem to have much scientific basis, as VICE reports. Indeed, the outlet notes that one study of 81 strains found that their "names often do not reflect a meaningful genetic identity."

The authors showed, for instance, that Jamaican Lambs Bread, a reportedly 100% sativa strain, was almost genetically identical to a reportedly 100% indica strain from Afghanistan. They surmise this inaccuracy is due to the fact that, in the last century, cannabis breeding and growing have remained largely underground, and therefore unregulated, operations.

So even if a strain is known for being high in a certain compound — like, say, THCV — changes in breeding might have altered its levels of this compound over time, Hill says. In other words, if a budtender recommends a high-THCV strain, eye it with some skepticism. "In the absence of proper analytics, I am not sure how anyone could know if their 'strain' of cannabis was actually indeed rich in THCV or not," Hill tells Mic.

Even if you do somehow manage to get your hands on a legit high-THCV strain, the cannabinoid, at best, will have subtle effects on how your brain processes the environment, as Hill says, and it probably won't contribute to your high. An energizing, euphoric cannabinoid that staves off the munchies may be a stoner’s wet dream — but we can’t yet say whether THCV is it.

More like this
'Nine Perfect Strangers' is a deranged portrait of psychedelic wellness retreats
By Erin Qualey
We learned collective grief from 9/11. We could really use those coping skills right now
By Melissa Pandika
For young people, it’s weed over alcohol during stressful times
By Melissa Pandika
Stay up to date