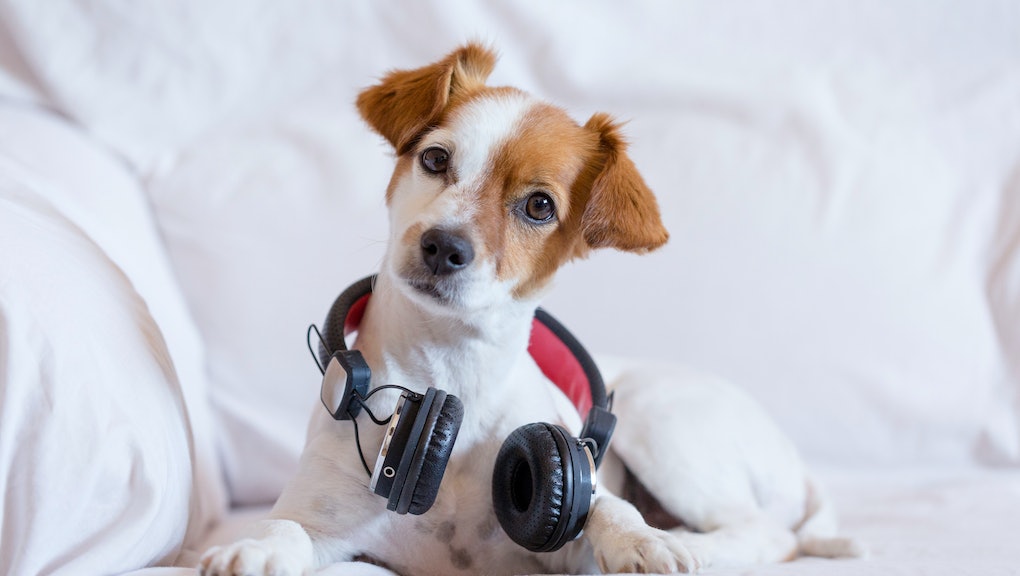 What music do dogs love? Here’s what experts recommend you play for your pet

I truly never knew that dogs listening to music was a thing until I started dog-sitting in L.A. As an owner left me with her poodle, Jimmy, she asked me to play Beethoven for him, especially if he started to bark or pace back and forth. As soon as she left, Jimmy indeed barked. And barked. And barked. But when I turned the music on, he stopped and laid on the couch. Magic. (“Moonlight Sonata” was his favorite — he’d go lie down in his bed for it — and I can’t listen to it now without thinking about him.) When Beethoven would end, Jimmy would bark, and we’d listen to it again.

As it turns out, Jimmy’s not the only dog who likes to relax by listening to music. One 2017 study from Psychology & Behavior even reported which types of of music dogs love most. It found that two genres, soft rock and reggae, caused dogs to be more relaxed and less stressed than others.

For the study, researchers examined the effect of various genres of music on the stress levels of kenneled dogs. To do so, they looked at the physiological and behavioral response of 38 dogs over five days and played five genres of music for them: soft rock, Motown, pop, reggae, and classical. When dogs heard soft rock and reggae, their Heart Rate Variability (HRV) — the time intervals between heartbeats — was higher, which meant decreased stress.

And, during all five types of music, the dogs spent much less time standing and much more time lying down, indicating they were more relaxed, Dr. Sara Ochoa, a veterinarian and veterinary consultant for DogLab, a website that suggests the best gear and treats to buy for your dog, tells Mic. Although the dogs’ barking habits didn’t change while the music played, the dogs were more likely to bark when the music would end.

The study also found that the effect of habituation — acclimation to a new stimulus, like a certain genre of music — on dogs may be reduced by increasing the variety of music. In other words, if your dog seems stressed by a certain type of music, you might want to play a mixture of different genres, says Dr. Ochoa, making sure to include the type of music you want your dog to like throughout. Then, slowly increase the number of times that specific type of music is played in the mix until your dog is okay with it.

Li-ran Bukovza, found of PuppyTip, a dog advice website, has personally seen the positive benefit of certain types of music on dogs. “Genres such as reggae and soft rock usually have a slower tempo, which some dogs may find more relaxing,” he says. “This also explains why songs with more beats per minute — like hard rock, heavy metal, or anything with a heavy bass or too many digital noises — tend to cause more excitement or anxiety.”

To that point, Dr. Ochoa notes that in an earlier study, from 2012, a team of researchers from Colorado State University’s College of Veterinary Medicine researched the effect of certain types of music on kenneled dogs’ stress levels, including heavy metal. They observed 117 dogs over a four-month period to see how they responded to heavy metal, classical, and another type of classical music that was designed specifically to soothe dogs. Classical music was found to relax them and caused them to sleep more, while the heavy metal caused them to tremble and increased their agitation and stress levels. The music that had been specially designed for them had no significant effect on their behavior.

Bukovza adds that, just like with humans, it’s not only genre that matters for dogs, but volume. “Music can soothe, upset, or put your dog in a playful mood, depending on the type of music and the volume,” she explains. “Also, remember that dogs’ ears are much more sensitive than humans’, so be sure not to play any music too loudly.”

When choosing music for your dog, Bukovza also says to keep in mind that, since an adult dog has approximately the intelligence of a human toddler, a good rule of thumb is to consider whether you would play this music for a baby. “Pay attention to your dog’s reaction when you’re around. Some dogs have been known to howl along to their favorite songs,” he says. “If your dog shakes, whimpers, or pants as music is played, it’s making them anxious and needs to be changed, lowered, or turned off.”

She suggests playing classical music to relax your dog if they’re anxious, having separation anxiety, or need to sleep. If you need to drown out loud noises like construction or fireworks, however, reggae or classic rock may work better since they tend to have louder bass in their songs. Dr. Ochoa agrees with Bukovza, adding that music types can be used interchangeably, as long as the music you choose is louder than the noise you’re trying to drown out.

Dan Schachner, Animal Planet’s Puppy Bowl referee, who also fosters dogs regularly, tells Mic that he experiences the study’s findings in his day-to-day life. “I’m also an unapologetic fan of yacht rock, which falls squarely in the realm of soft rock, and can report with certainty that, yes, the pooches love Air Supply,” he says.

He cites other research, too, that concluded that classical music calmed down dogs more so than other types of auditory stimulation, such as human conversation, heavy metal music, and pop music. “And, from experience, here is what I know: If music can calm me down, then it can calm my dog(s) down.”

Amman Ahmed is the founder of MusicforPets, the company behind RelaxMyDog (and RelaxMyCat), which creates audio and visual programming specifically for animals. Initially, Ahmed created a company, Roundwaves, to help people relax through music, but while working with Salvadoran composer Ricardo Henriquez, he soon realized the music was helping Henriquez’ dog, Zuki, relax. He’d become anxious whenever he heard gunshots, which were common where they lived.

“We knew we were onto something and realized the effect of our music on wider issues for dogs — such as anxiety, sleep problems, while they’re with a petsitter, and general loneliness,” Ahmed tells Mic. He realized there was a gap in the market for a natural solution — as opposed to medication — to help dogs in these situations, and RelaxMyDog was born. The company specializes in music for dogs to help them with everything from depression to separation anxiety. Although they’ve created many modified music types, from soft rock to classical piano, their top three genres are reggae, classical, and Oriental.

Ahmed adds that his company’s secret musical formula for their programs are based on seven years’ worth of feedback research. Their YouTube channel alone has almost 437,000 subscribers — and counting — and in 2018, RelaxMyDog and RelaxMyCat were listened to by 20 million dogs and cats on all their platforms, from websites to music streaming services.

Today, MusicForPets gets some emotional requests from fans, says Ahmed. “Pet owners reach out saying their cat or dog just passed away and they want to use the animal’s favorite track to play at the funeral. It is insanely heartwarming that our music was such a deep part of their pet’s life.” He says messages like this are one of thousands that reinstate the “why” behind his company’s purpose and encourages people to introduce music to their dogs. “All you have to do is press ‘play’ and you’ll see your pet settle into a relaxed state,” he says.

However, Dr. Ochoa says that what works for one dog may not work for another and the only way to know is through trial and error. “Be cognizant of how your dog responds and go from there,” she says.

Correction: This article has been updated to reflect a clarification from an expert.

This article was originally published on July 24, 2019

More like this
The paused Johnson & Johnson vaccine just means that science is working
By Melissa Pandika
How long a weed high lasts, according to science
By Melissa Pandika
Making chocolate involves a weird and crucial step
By Caitlin Clark
Stay up to date