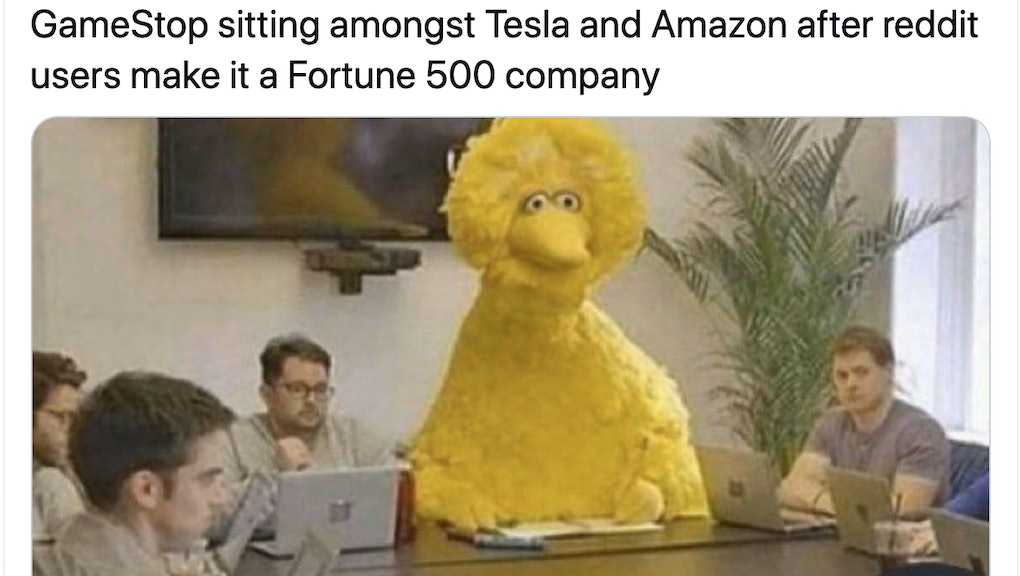 What the hell is going on with GameStop and Wall Street?

Until it drew the interest of Redditors on a discussion board called r/WallStreetBets, GameStop was dying a slow death along with brick-and-mortar shopping malls, where the world's largest video game and electronics retailer was once ubiquitous. The chain shuttered hundreds of locations over the past two years, and though it’s attempting a pivot to digital, its stock bottomed out at just $2.57 per share last year. The company’s prospects are grim enough that Wall Street sharks, i.e., hedge funds and short sellers, placed bets it would keep tanking. GameStop became the most-shorted stock on the market — until Reddit swooped in and made it a “meme stock.”

The way short selling works is like this: Under ordinary circumstances, short sellers would borrow, let's say, 100 shares to sell for $50, betting that the prices will keep falling to $40. Then they will buy them back and return them to the lender, pocketing the difference. But if the shares go up, the short sellers are on the hook for those borrowed shares, which have to be returned by a certain date. This is what's happened, to an unprecedented extent.

Wielding cheap and accessible trading tools like the app Robinhood, the r/WallStreetBets community snapped up shares of GameStop en masse, forcing the stock to soar nearly 2,000 percent over the last month. On Wednesday alone, its stock price more than doubled, topping over $350 a share at one point. Elon Musk even played a role in GameStop’s meteoric inflation (because of course he did); the billionaire businessman briefly pushed the stock above $200 on Tuesday with a one-word tweet: "Gamestonk!!"

GameStop stock — which is valued twice as much as Apple as of press time — isn't the only "meme stock" anymore, either. In the wake of their huge success, r/WallStreetBets members are turning their focus to other struggling companies. Share prices of brands like Blackberry and AMC soared after Redditors championed them, too.

Aside from the potential financial windfall, a lot of the appeal of “meme stocks” seems to stem from the rush of sticking it to Wall Street and screwing over the rich. That helps explain why GameStop’s wild stock market ride became such a viral sensation this week: As people got wind of the collective power of a bunch of proletariat traders on Reddit, they couldn’t get enough. Naturally, the whole phenomenon has been copiously memed.

Beyond that, I cannot explain to you the lasting implications of Redditors going all Robin Hood on Wall Street. I am a lowly culture writer with lots to say about entertainment and art and memes (because let’s be real, 2021 culture = memes most of the time), but not so much to offer in the realm of financial success. You’ll have to lean on Margot Robbie sipping champagne in a bubble bath for that.

More like this
He made a cryptocurrency called SCAM. Now he's trying to make it legit
By AJ Dellinger
Elon Musk has finally realized Bitcoin is awful for the environment
By AJ Dellinger
The NFT gold rush, explained by the world's first meme manager
By Kara Weisenstein
Stay up to date