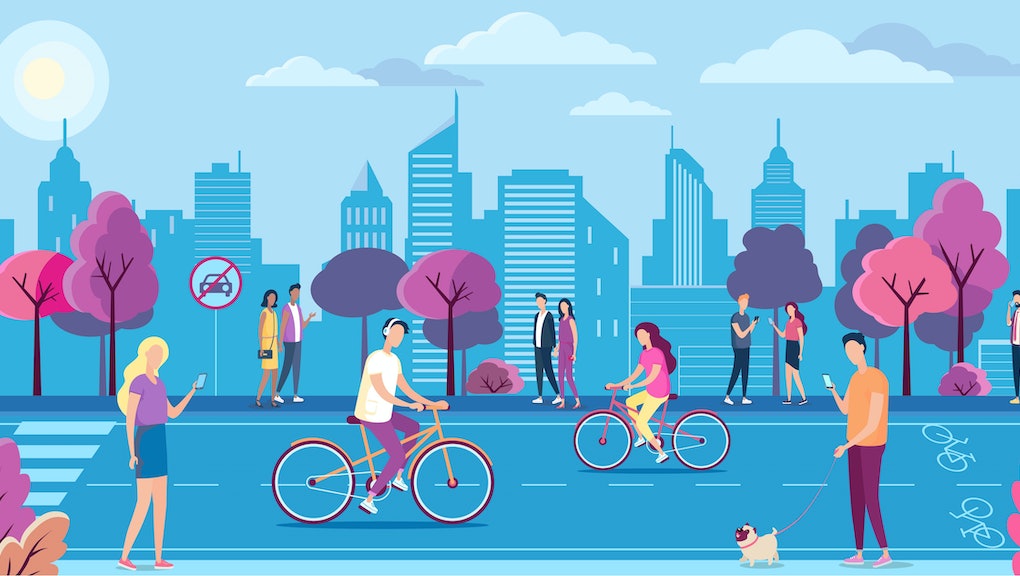 The growth of cities, both in the United States and around the world, has skyrocketed since the 1950s. Millions of people have migrated to metropolitan areas in pursuit of career opportunities, education, and lifestyles. But the shift to ever-increasing population centers has its downsides. Aside from the ever-increasing cost of living the coronavirus pandemic has highlighted another problem with the modern city: stacking people on top of one another and packing them into subway cars creates an ideal breeding ground for communicable diseases.

Cities across the U.S. are already starting to take a new shape as a result of the pandemic. Oakland has shut down 74 miles of road to cars, opening them solely for cyclists and pedestrians. New York City plans to close off 100 miles of streets for similar purposes. Seattle has announced it will permanently retire 20 miles of pavement. Cities like Cincinnati are turning streets into outdoor patio space for restaurants so they can serve more people without confining them indoors, where COVID-19 tends to spread faster. It's not clear how long these changes will remain in effect, but the short-term gives us a glimpse at what cities could be — perhaps should have been in the first place — with more forward-thinking urban planning in mind.

"[Coronavirus] certainly has put in the spotlight some of the core principles of 20th-century urbanism," Michele Acuto, Director of the Connected Cities Lab and Professor of Global Urban Politics at the University of Melbourne's School of Design, tells Mic. "Density has for instance been debated quite extensively and questioned due to the ’social distancing’ needs of lockdowns and transmission risks of a virus." The reason that the increasing density went largely unchecked while millions made their way into cities was relatively simple, according to Carlo Ratti, director of the Sensible City Lab and professor of Urban Technologies and Planning at the Massachusetts Institute of Technology. "One general belief in city planning is that density is good," he tells Mic. "[Dense cities] promote diversity, innovation, and a more sustainable lifestyle." However, Ratti noted that it's impossible to ignore "contagious viral diseases spread quickly in densely populated environments."

That fact alone is enough to make many rethink the very principles of urbanism that led to mega-cities around the world. It's clear, according to Acuto, that very little consideration was given to the possibility of a pandemic when many of these cities were being planned. He noted that after the SARS outbreak in 2003, the World Health Organization developed International Health Regulations that aimed to create local influenza preparedness plans. "But this has often been limited to the health sector, with limited strategic considerations in planning especially in terms of resilience, crisis management and overall capacity to manage urban infrastructure in the event of a major outbreak," he explains. The result of that might often look like how New York City handled the outbreak, with field hospitals quickly being built to handle the increased demand for hospital beds, but subways — believed to be hotbeds for the virus — still running most hours of the day because of the lack of alternatives for many essential workers who have to get to and from their jobs each day.

These systems may require re-thinking in a post-coronavirus world. Acuto says that the pandemic has "ground to a halt and questioned in its basic design" everything that we know about transportation and mobility management. He says new questions will arise from the pandemic, like, "Can we really pack commuters like sardines again after this?" But, he also notes that undoing these types of advancements might result in a significant step back in some of the biggest benefits that cities provide. Ditching public transit for cars, for instance, will lead to an increase in the amount of air pollution and overall carbon emissions, which contribute to climate change. While shelter-in-place orders managed to temporarily decrease the amount of air pollution being produced in many major cities, data shows that people have started to move around again as states start to open up, and they are doing much of that movement in cars rather than on public transportation. "In many cities, car usage has gone up from lows in the 20 percent range to highs over 60 percent and might be there to stay in spite of urgent needs to lower it even more in the long term for climate change," Acuto warns.

The increased presence of cars presents a risk to pedestrians. More cars on the road make alternatives like biking more dangerous. Shutting down streets and converting them into safe havens for pedestrians and cyclists is one way to help alleviate the reliance on cars, but Ratti notes that there's one major opportunity that has presented itself in the wake of the coronavirus pandemic that could help reshape the city: smarter working.

Much of city life is built around the daily commute. The significant uptick in remote work that has occurred because of coronavirus offers the opportunity to re-think the daily 9-5 lifestyle that leads to traffic jammed roads and overpacked subway cars and buses. "If we spread morning commutes over time, perhaps taking advantage of the higher flexibility that smart working has granted to our professional lives, we might be able to avoid saturation of the road network and reduce the morning chock-a-block," he says. Ratti notes that these changes could also help change urban infrastructure, potentially allowing cities to "downsize the number of square feet per person in our offices," eliminate "supersized shopping malls," and even re-think when travel is necessary so we don't have to "spend so much time at airports and in airplanes." Ratti harkens to the language of epidemiology when addressing this. "Our effort over the past weeks have focused on 'flattening the curve,' he says. "The same exercise could now be successfully applied at the urban scale: we could start 'flattening the urban curve.'"

Neither Ratti nor Acuto imagine a world in which suddenly millions of people flee from the city and head to more rural environments in order to more permanently maintain social distancing. On the contrary, Ratti notes that "Our cities are resilient and have survived many pandemics throughout time." Likewise, Acuto warned that while cities certainly may change in years following the coronavirus pandemic, urbanism isn't going anywhere, in large part because it works. "The issue with transmission and number of people in cities is not really one of density, but of crowding and of management of proximity of people, and calls against density have lost often entirely the complexity of socio-economic diversity underneath it," he says. Cities don't just happen on accident. People move to them to pursue new opportunities and to access things that they otherwise wouldn't have. Good urban planning makes these dense population hubs more manageable, accessible, and sustainable. The coronavirus pandemic will give cities a rare opportunity: a temporary break in the action of seemingly endless growth during which they can revisit what is working, what isn't, and how to adjust for the future.