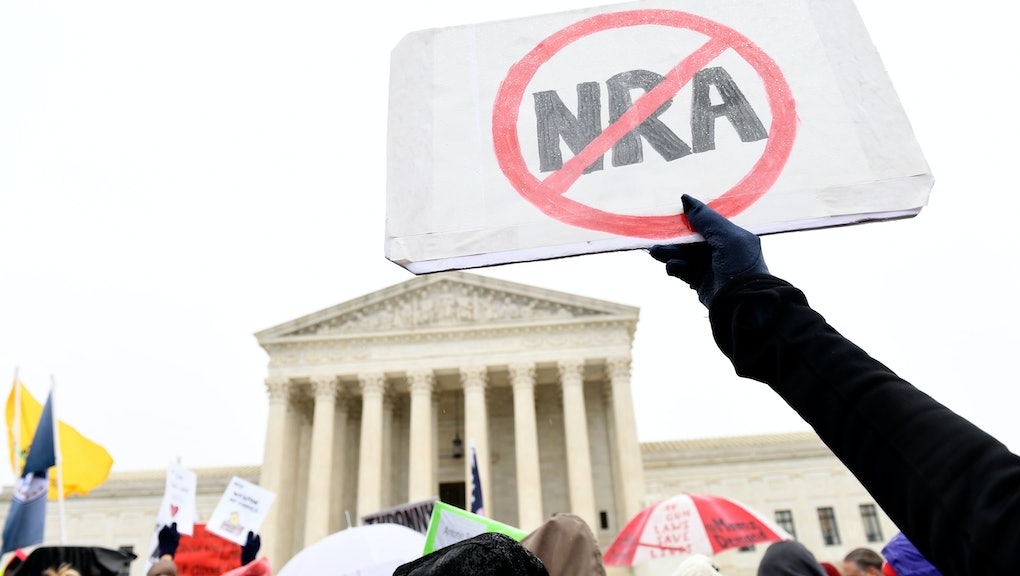 What's up with the NRA's legal troubles?

The National Rifle Association is facing an aggressive new subpoena from the attorney general of New York, Letitia James, as part of the ongoing eight-month investigation into the organization’s tax-exempt status. According to The New York Times, James’s subpoena requests documents related to the NRA’s campaign finance programs and payments to members of its board, as well as internal communications relating to the company’s PR firms. The ongoing investigation presents a severe threat to the prominent gun rights group, which is chartered in New York: The NRA is a tax-exempt organization, and a threat to that status could bankrupt it out of existence.

The NRA is also staring down the barrel of an investigation by the attorney general for the District of Columbia, Karl A. Racine, into its affiliate group, the NRA Foundation, which is based in the U.S. capital. 2019 has not been an easy year for the gun group, as it has been beset by public squabbling between various prominent figures, including Oliver North, the former head of the board, and Wayne LaPierre, the longtime chief executive of the organization.

William A. Brewer III, counsel to the NRA, told Mic in an emailed statement that the organization will supply the information requested in the subpoenas "as necessary," noting that all of the NRA's bookkeeping was conducted "in accordance with state and federal regulations." Still, he claimed that the organization believes that James's "zeal" in seeking more information "reflects the investigation's partisan purpose — not an actual concern that the NRA is not effectively using its assets to pursue its members' interests."

The NRA’s troubles spilled into public view when news broke of a legal battle between the NRA and Ackerman McQueen, the advertising firm it has worked with for years. The firm was responsible for creating NRATV, an online TV network that featured inflammatory segments from right-wing media personalities like Dan Bongino and Dana Loesch. But the NRA alleged in a lawsuit that despite its spending huge sums of money on NRATV, the Ackerman McQueen product never drew large audiences.

"Many of these campaigns, which cost clients tens of millions of dollars, were shut down because of their ineffectiveness, costliness, and Ackerman's reluctance to provide performance data in accordance with its client obligations," claimed the NRA's August lawsuit.

NRATV videos often veered far beyond activism on guns. In one memorable video, Loesch threatened to “fisk” The New York Times, which many people misheard as “fist.” In its complaint, the NRA accused Ackerman McQueen’s content of “stray[ing] from the Second Amendment to themes which some NRA leaders found distasteful and racist.”

The NRA demanded that Ackerman McQueen remove all NRATV videos from its website. "Ackerman's website falsely proclaims that NRATV is the 'world's most comprehensive video coverage of freedom-related news, events, and culture,' which creates the misimpression that NRATV was a successful endeavor that the NRA endorses," the complaint read. "In actuality, the NRA recently concluded ... that NRATV was a failed endeavor under any appropriate performance metric."

A May story in The New Yorker revealed that the gun group had been plowing through tens of millions of dollars a year on media expenditures through Ackerman. In leaked internal documents, a senior NRA executive wrote, “Management has subordinated its judgment to the vendors,” referring to Ackerman. “Trust in the top has eroded.” Ackerman had worked for the NRA for thirty years, and had been given largely free reign to charge the organization exorbitant sums for its work over the years. “Most staffers think that Ackerman is too expensive,” a former NRA employee told the magazine. “They think they’re just using the NRA to make a massive profit.”

The split between the NRA and the firm led to a public rift between LaPierre and North, who had a separate contract with Ackerman. In June, LaPierre accused North of leading a “coup” against him, per CNN. North was forced to resign from his role.

“The NRA alleges that [North] breached his fiduciary obligations — in a coordinated attack against the NRA and Wayne LaPierre that involved others motivated by their own economic self-interest,” an NRA spokesman said at the time.

The NRA’s second in command, Christopher Cox, resigned as well, after being implicated in the so-called coup attempt.

Meanwhile, LaPierre was hit by embarrassing reports about his personal finances. The Wall Street Journal was given leaked documents indicating that he spent $274,695.03 on suits at the upscale men’s clothing store Ermenegildo Zegna and $267,460.50 on travel to the Bahamas, Florida, Nevada, Budapest, and Italy. The Journal reported that LaPierre billed those expenses to Ackerman.

In an emailed statement to Mic, Andrew Arulanandam, the managing director of NRA Public Affairs, said that LaPierre "had been advised by the NRA's external advertising professionals to invest in his professional wardrobe due to his numerous public and media appearances." Regarding the travel expenses, Arulanandam said those trips "involved donor outreach, fundraising, and stakeholder engagement."

In June, The Washington Post reported on self-dealing at the organization, with large sums of money being spent on companies that employed members of the board. The company paid a board member and former football player $400,000 for “public outreach,” while another board member was paid $28,000 for articles he wrote for the NRA’s media publications. In his statement to Mic, Arulanandam said the NRA only pursues such arrangements when they work "in the best interest of the organization and its members."

All of these embarrassing leaks and internal squabbles form the backdrop to the ongoing investigations into the group. After all, it’s hard to argue that an organization deserves tax-exempt status when it’s basically being used as a personal bank account for its own board members.

James’s lawsuit also requested documents related to how money moves between the NRA and the NRA Foundation. According to the Times, tax records show that the organization took more than $200 million from its foundation between 2010 and 2017. Donations to the foundation are tax-exempt, while those to the NRA itself are not. This could indicate that the foundation structure is being used to get around restrictions on how groups like the NRA spend their money — in other words, using tax-exempt donations for political action.

“This should raise, and should have raised, red flags,” Norman I. Silber, a law professor at Hofstra University, told the Times. Arulanandam told Mic in an emailed statement that the NRA "employs strict controls to ensure this money is used for charitable purposes," and that the NRA uses money taken from the NRA Foundation for "educational and charitable programs."

For now, there’s no indication of when the New York State investigation — or any of the other seven ongoing investigations into the NRA — might produce any kind of public result. But considering the amount of sketchy-seeming behavior that’s already come out in the press, they may have their work cut out for them.

Editor's Note: This article was updated to include statements from representatives for the NRA. Mic had reached out to the organization before first publishing this article, but did not hear back before press time.

This article was originally published on Dec. 12, 2019